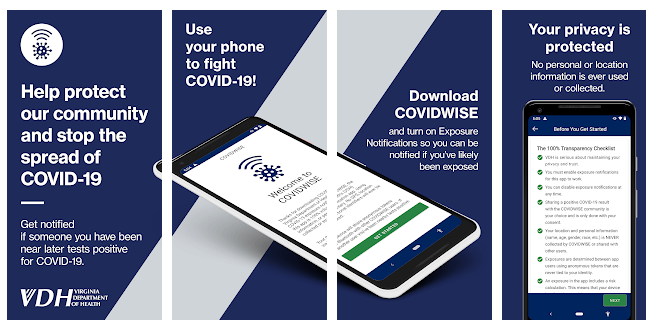 Virginia health officials launched a smartphone app Wednesday that alerts users if they were in close contact with other app users who later test positive for COVID-19.

Called COVIDWISE, the software’s release makes Virginia the first state to begin using a technology platform created by Google and Apple with the aim of letting users know if they were potentially exposed while maintaining privacy.

The software does not track or store personal or location data and only uses Bluetooth to log when app users are close together, according to developers. If an app user later tests positive, VDH confirms the results and provides the user with a PIN, which they can then enter into the app, triggering a virtual contact tracing.

“If someone reports to the app that they tested positive, the signals from their app will search for other app users who shared that signal,” according to an explanation of how the software works in the Apple App Store. “The (Bluetooth) signals are date-stamped and the app estimates how close the two devices were based on signal strength. If the timeframe was at least 15 minutes and the estimated distance was within six feet, then the other user receives a notification of a possible exposure. No names! No location!”

The software was live and available to download in the Apple and Android app stores on Wednesday morning. Gov. Ralph Northam is expected to announce its launch and provide additional details later today.

At least 10 states have launched or are planning to launch similar apps, according to CBS News.