Recently I criticized a Dominion Energy advertisement that boasted, misleadingly and inaccurately, about the company’s investments in solar energy.

By contrast, the company’s investments in greenwashing are transparent and heartfelt. Dominion has had several bad months here in Virginia and would very much like to change the conversation.

In fact, the company’s problems keep mounting. In the course of just two days this month, SCC commissioners lit into the company for telling Wall Street one thing and regulators another; the corporate customers behind Virginia’s data center boom filed a letter saying they want no part of Dominion’s fracked-gas build-out; and a coalition of libertarian, environmental and social justice groups called for a breakup of Dominion’s monopoly.

Fortunately, Dominion’s PR offensive was only just ramping up. A full-page newspaper ad, predictably light on detail, promises the company will cut its climate-heating methane emissions in half. That would be a nice trick from the company whose Atlantic Coast Pipeline will be responsible for more greenhouse gas emissions than all Virginia’s power plants put together. 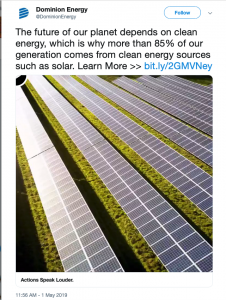 In case you doubt the company’s sincerity, Dominion just joined a corporate coalition calling for a price on carbon.

This must have been in the works about the same time Dominion was criticizing Virginia’s proposed entry into the Regional Greenhouse Gas Initiative, which actually puts a price on carbon.

Hey, The Washington Post fell for it. Greenwashing works.

And that brings us to the (literally) incredible claim that recently appeared in Dominion Energy’s Twitter feed: “The future of our planet depends on clean energy, which is why more than 85% of our generation comes from clean energy sources such as solar.”

Let us pause for a moment to reflect that this tweet comes from a company whose solar generation amounts to a rounding error. Dominion Energy Virginia’s most recent Integrated Resource Plan includes a handy pie chart revealing what is actually in its energy mix:

Nobody looking at these figures could find a basis in reality for a claim of 85% clean energy. It is so preposterous that I just have to ask: Why only 85%?

I mean, seriously, if you have traveled this far into the realm of fantasy, why not claim 100%? Or heck, with a nod to Spinal Tap, why not 110%? Clearly the people making this stuff up are rank amateurs.

All of which is to say: come on, Dominion, you can do better.

(Editor’s note: Dominion says it has developed 1,200 megawatts of solar in nine states since 2013, with an estimated 5,200 megawatts that “could be added” in the next 25 years.)

Ivy Main is a lawyer and a longtime volunteer with the Sierra Club's Virginia chapter. A former U.S. Environmental Protection Agency employee, she is currently the Sierra Club's renewable energy chairperson. Her opinions are her own and do not necessarily reflect those of any organization.

Across cultural lines, home schooling has boomed since… by Jeff South January 3, 2022
Can Southwest Virginia remake itself as a laboratory for… by Sarah Vogelsong September 20, 2021
Trump’s fake electors: Here’s the full list by Kira Lerner June 30, 2022