The Governor’s Advisory Commission on Opioids and Addiction was formed the same day as its first meeting, Friday. Northam’s administration announced the commission Friday but didn’t provide the members’ names until Monday. It’s made up of 27 members including county officials from Wise and Alleghany; city and schools officials from Roanoke; law enforcement officials; attorneys; health experts; family members affected by opioid addiction; and Sen. George Barker, D-Alexandria and Del. Todd Pillion, R-Abingdon. 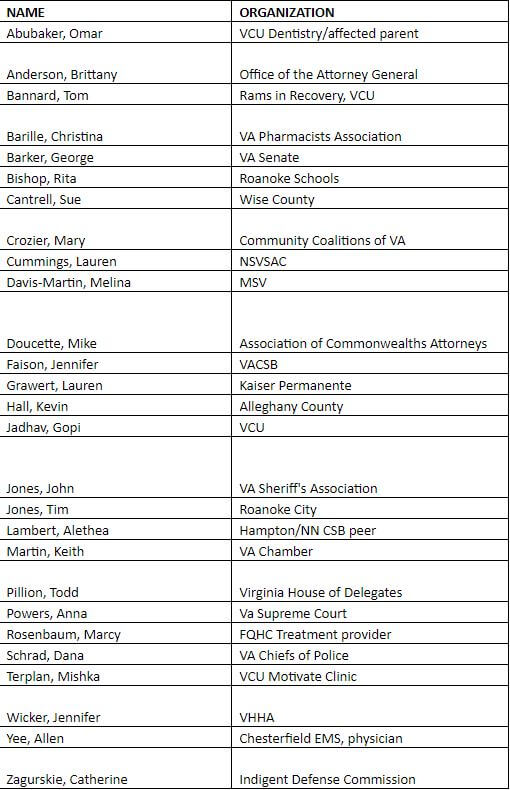 “It’s essential that we draw upon the knowledge and experience of experts and community partners from across Virginia to in order to develop policies and interventions that will reduce the impact of addiction in the commonwealth,” Northam said in a news release.

“While this group will primarily focus their efforts on the opioid crisis, I also want to ensure that we are addressing all of aspects of addiction that are affecting our friends and neighbors, no matter the substance.”

Drug overdoses have been the leading cause of accidental deaths in Virginia since 2013, Northam wrote in his executive order establishing the commission. Last year, more than 1,500 people in the state died because of an overdose. More than 80 percent of those people overdosed on prescription opioids, heroin or fentanyl.

“Virginia’s leaders must also focus on the biological, psychological and social factors that foster addiction in an individual so that those factors can be addressed and mitigated,” Northam’s order reads. “The disease of addiction is not exclusive to any substance and addiction will always find another drug.”

The new commission will work with the Governor’s Executive Leadership Team on Opioids and Addiction, which is made up of state agencies. Former Gov. Terry McAuliffe formed that group in 2016.

The commission will review the state’s current approach and provide suggestions and direction.

“As Virginia bolsters resources to address this epidemic through federal funding grants and the upcoming expansion of Medicaid, we want to ensure that we are using those resources in the most effective ways and building on the progress that our state agencies have made on this issue over the past few years,” Secretary of Health and Human Resources Daniel Carey said in a statement.

Mechelle, born and raised in Virginia Beach, is a graduate of Virginia Commonwealth University with a degree in mass communications and a concentration in print journalism. She covered the General Assembly for the university’s Capital News Service and was among 12 student journalists in swing states selected by the Washington Post to cover the 2012 presidential election. For the past five years, she has covered local government, crime, housing, infrastructure and other issues at the Raleigh News & Observer and The Virginian-Pilot, where she most recently covered the state’s biggest city, Virginia Beach. Mechelle was with the Virginia Mercury until January 3rd, 2019.