The facilities — the Dulles Expo Center in Northern Virginia and the Richmond and Hampton Roads convention centers — will be able to provide beds for 1,107 acute patients or 1,848 non-acute patients, Northam said Friday.

The sites are intended to free up capacity in the hospital system by providing “general, low-level care for mildly to moderately symptomatic COVID-19 patients,” according to Army Corps guidance.

“We are still in the early stages of this outbreak, but we must ensure that Virginia is ready when the surge of acute cases hits our healthcare system,” Northam said in a Saturday post on the Governor of Virginia Facebook page. 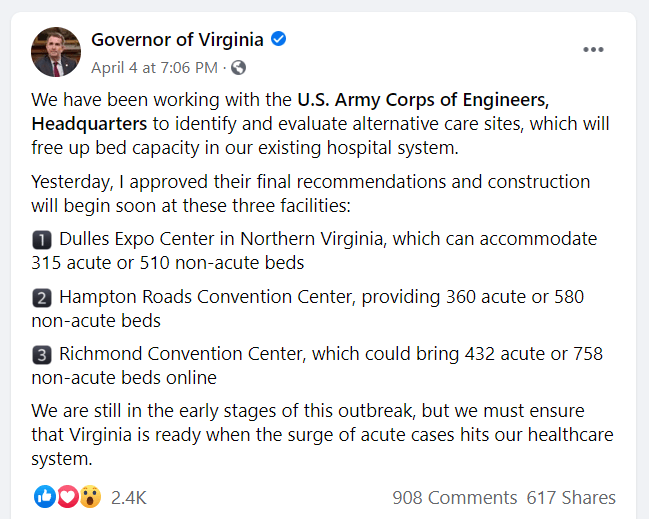 The Army Corps’ Norfolk District said in a statement that they expect the conversions to be complete within six weeks, with work beginning 48 to 72 hours after contracts are awarded.

The conversions will require the adaptation of existing generation, water, sanitation, oxygen and HVAC equipment to match hospital needs, as well as the buildout of the facilities “to provide stations for medical personnel, pharmacies, as well as admin spaces in addition to patient care areas,” according to the Norfolk District.

During emergencies, states can request assistance from the Army Corps of Engineers to meet technical engineering needs, such as the construction of alternate care facilities.

Virginia requested that the Army Corps begin identifying potential sites early in the week of March 23.

Forty-one sites across Virginia were evaluated. On Wednesday, Northam said the Norfolk District’s list had been narrowed down to the Hampton Roads Convention Center, “a site in the Richmond area” and the former Exxon Mobil campus next door to Inova Fairfax Medical Center.

On Friday, when Northam announced the final picks, he said that the Dulles Expo Center in Northern Virginia had been chosen because necessary construction could proceed most rapidly there.

Models used by the state government project that coronavirus cases will peak in Virginia in May.