As Metro prepares to open six new rail stations in Northern Virginia, some future passengers are expressing dismay over their limited access for pedestrians and cyclists.

While they say they are pleased with station amenities including bicycle racks, drop-off points and access to bus and car services, they see room for more improvements that could provide better connections to the transit points that don’t rely on vehicles.

“It’s really unfortunate because we’ve known these stations were going to be here for many years,” said Bruce Wright, president of the Fairfax Alliance for Better Bicycling. “They’ve done a lot of planning and they’ve built a number of facilities, but there are still huge gaps.”

With stations set to open Nov. 15, there is little time for transit and local planners to address access issues before trains start running. However, localities and advocates said they are working to meet the demands of future passengers.

Reston Town Center, Herndon and Innovation Center are the three new rail stations slated to open in Fairfax County as part of the second phase of the Silver Line extension. All of them are in a highway median, with walkway access on the north and south sides of the corridor.

But Wright said the rail station areas lack shared-use paths for pedestrians and cyclists, incomplete sidewalks and poorly maintained trails. Access improvements are also tied into future development plans at least a year away from construction.

“We would just like to see them expedited because once the stations open, people are going to develop a way to get to them, and it would have been nice to be able to do that on foot and on bike,” Wright said. 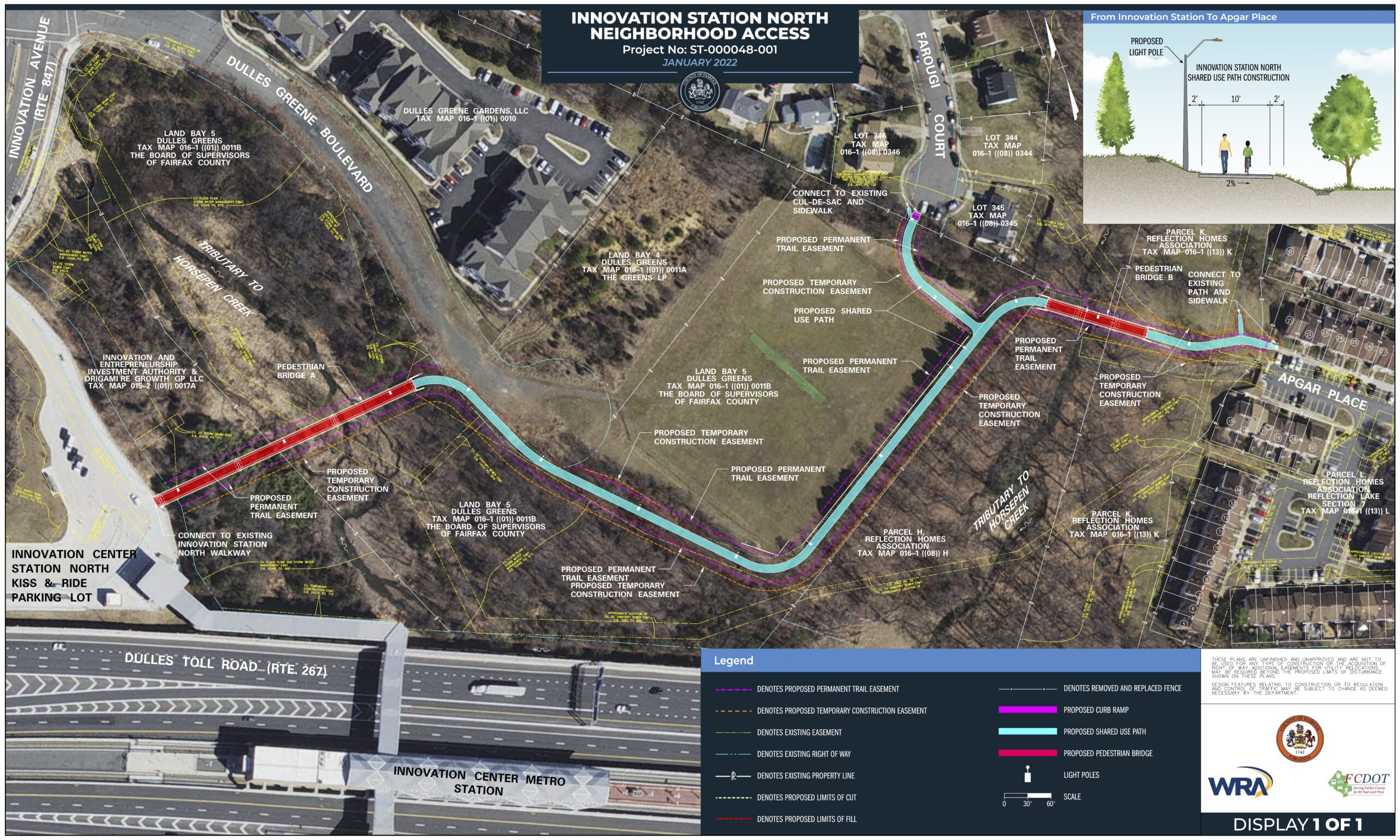 Metro will also open three stations in Loudoun County, including one at Washington Dulles International Airport. The rail station, which rests above the airport grounds, will provide access to the busiest airport in Virginia.

Few, if any, may consider cycling or walking to the Dulles station due to its distance from residential areas. Likewise, Loudoun Gateway Metrorail Station is surrounded by data centers and office buildings.

However, cyclists and pedestrians may consider using the Ashburn rail station due to its proximity to residential areas. Ashburn, which is the final stop of the 23-mile extension, neighbors restaurants and businesses, including the 600-acre mixed-use Moorefield Station development that’s under way.

Andrea McGimsey, executive director of Faith Alliance for Climate Solutions, said Ashburn is one of the most accessible of the new stations for cyclists and pedestrians. However, she said even that access is limited: Residents must cross major roadways to reach the station, bike rack space could prove insufficient and buses will operate only on weekdays.

“The most generous thing I can say about them is they’re gonna get it done, and they’re just super late, but again color me skeptical that they’re actually ever gonna prioritize us and really do it,” McGimsey said.

Criticism dates back to Tysons station

Complaints about the accessibility of Metro stations in the increasingly dense Northern Virginia are nothing new. Fairfax leaders faced heavy criticism after the first phase of the Silver Line opened in 2014. One of the reasons was the lack of access, as documented by college students, for pedestrians and cyclists around Tysons Corner, one of the biggest commercial centers in Fairfax County.

“I think with Tysons everybody realized pretty quick once those stations opened how inaccessible they still were for people on foot or trying to bike in that area,” said Sonya Breehey, Northern Virginia advocacy manager for the Coalition for Smarter Growth. “These projects are being completed and brought online, but it’s years now that the stations were actually open. So it’s a work in progress — still making good progress — but still having some growing pains.”

The major arterial roads and Interstate 495 that run between the rail stations created problems for local leaders, with multiple cases of walkers and cyclists being hit by cars in the vicinity.

Breehey said that if the intention is to move people by using transit, leaders have to incentivize its use and encourage less driving.

“You can’t throw all of these things into the mix and assume our vulnerable users — the people outside of cars that don’t come with the airbags — will be safe. They are the ones that pay the greatest consequence,” Breehey said.

But there have been improvements. A new pedestrian bridge has been built over I-495, as well as a new shared-use path for walking and bicycling that extends to the McLean rail station.

Multiple apartment buildings and condos stand around the path equipped with lights on the bridge’s east side. On the west side, a sign points travelers to the Tysons rail station.

Elsewhere along the Silver Line, a significant pedestrian improvement project is underway at the Innovation Center station, including a pedestrian bridge leading to multiple residential areas.

And in Loudoun County, leaders have partnered with the Virginia Department of Transportation on a $39 million improvement program for bicycle and pedestrian access around the Metrorail stations. The partnership includes creating shared-use paths, pedestrian signal upgrades and connections between the Washington & Old Dominion Trail and the stations.

Breehey said it’s “fantastic” that Fairfax is making considerable investments in expanding transit along the Silver Line, “but we need to really double down on and make sure that people can get to those Metro stations.” Officials, she said, should focus on creating “investment packages around these Metro stations to really make sure that the bike-ped connectivity is prioritized and implemented as soon as possible.”

Leaders in Fairfax and Loudoun said they are working to address accessibility around the new Metro stations but face hurdles linked to broader regional development.

For example, at Reston Town Center, a small crosswalk traverses six lanes of traffic between the rail station and a new high-rise office complex for Fannie Mae and Volkswagen.

Loudoun County Supervisor Sylvia Glass, D, admitted that accessibility around the Northern Virginia stations is not where it should be. Glass, whose district includes all three of the new stations, said she and others have talked with homeowners and their constituents about improvements, but one of the reasons for the delays is the need to relocate utilities to construct sidewalks, which could take up to two years.

“We just want to make sure that we have those safe passages for people that want to take the Metro,” Glass said. She’s also eager to ensure that children can safely cross the existing sidewalks and pathways.

Loudoun supervisors have said they will monitor the demand for more bike racks and interest in buses operating on weekends. Currently, bus service to stations is only offered during weekdays.

“I actually would encourage people to start walking and cycling to the Metro and contact my office if they encounter any challenges,” said Loudoun County Supervisor Mike Turner, D, who serves as chair of the board’s transportation committee. “I want to know specifically where they encounter the challenges and what they are so that we can focus county and VDOT efforts on those choke points.”

Editor’s note: The Coalition for Smarter Growth is a donor to States Newsroom, the Mercury’s parent organization. Reader and organization donations help the Mercury cover costs for staff and freelancers, but donors have no input on editorial decisions. For more information on States Newsroom’s funding click here. See here for our ethics policy.