Flowerdew Hundred Creek weaves through a forested landscape in Prince George County on the south bank of the James River. Surrounded by land often examined by archaeologists due to its rich cultural history, the creek contains a story of its own that wildlife officials are working to preserve.

Earlier this year, officials took steps to benefit Flowerdew Hundred Creek’s unique ecology by removing a culvert, or small tunnel that funnels water underneath a roadway, that was identified as a barrier to fish passage.

In March, the Virginia Department of Transportation decommissioned Nobles Road, and workers removed the culvert and replaced it with a natural stream channel, allowing the unrestricted passage of aquatic wildlife.

The project, which was funded with a $50,000 grant from the U.S. Fish and Wildlife Service, led to the reconnection of nearly 2 miles of potential river herring spawning habitat.

“With road stream crossings, it’s more of a cumulative impact when you add them all together,” said Alan Weaver, the fish passage coordinator for the Virginia Department of Wildlife Resources (DWR). “Then as you do each project, one by one you’re making a difference, but it takes several until you really open up a whole lot of habitat.”

River herring, along with American shad and hickory shad, are anadromous species, meaning they travel upstream to spawn in the spring and spend the majority of their lives at sea. The fish are historically and culturally valued in Virginia for the critical sustenance they’ve provided to communities and ecosystems over 100 miles inland from the sea.

But a growing list of threats have combined to block river herring and shad from reaching much of their historic spawning habitat. Losses have also been known to occur as a result of native and introduced predators, habitat degradation and pipes that act as water intakes for drinking, irrigation and cooling, said Weaver, adding that the percentage of losses due to each threat is unknown.

Alewife and blueback herring (also called river herring), along with American shad, are classified by Virginia as species of greatest conservation need. A moratorium on their fisheries has been in place in Virginia for roughly a decade as a result of low populations.

Cumulatively, road steam crossings are “a big one for the disruption of aquatic connectivity,” said Weaver. That was the case in Flowerdew Hundred Creek, where an undersized road culvert was acting as a possible barrier to river herring trying to make it upstream.

“It was small, and because it was undersized, there would be a lot of tree limbs and branches that would block up the culvert,” said Erin Reilly, senior staff scientist at the James River Association.

By removing the culvert and replacing it with a natural stream channel, “the best possible outcome was achieved for the fish,” said Lisa Moss, a fish biologist with the U.S. Fish and Wildlife Service. “So I’m hoping we can find some more roads that want to be abandoned.”

The Flowerdew Hundred Creek culvert isn’t the only one officials have identified as an obstacle to fish and other aquatic species’ movement.

A 2016 Fish and Wildlife Service regional assessment found over 100 road stream crossings limited aquatic species’ passage, while over 50 allowed no passage at all.

Once the culvert and 100 feet of roadway were removed from each side of the creek, staff from the James River Association, U.S. Fish and Wildlife, DWR and the Virginia Department of Forestry planted trees and vegetation at the site. Shenandoah Streamworks was hired to regrade the banks of the creek.

“It demonstrated that you could have an NGO, a federal agency, two state agencies and some private sector work done that pulled everyone together for a relatively inexpensive project and sort of lays the groundwork for doing other projects,” said Weaver. “That’s a really big value of the Flowerdew Hundred. It was truly a pilot project in herring waters.” 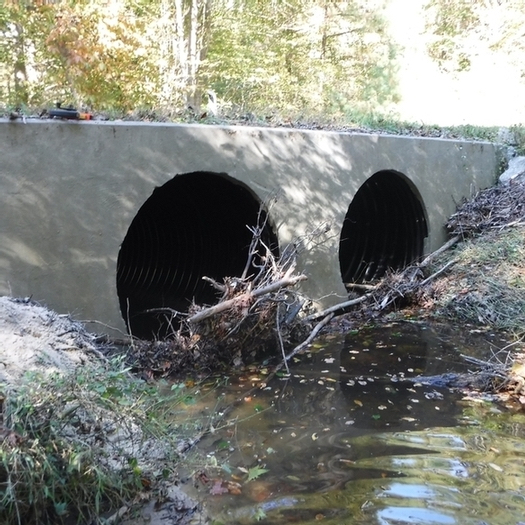 The Nobles Road culvert was known to fill with debris due to its small size, potentially blocking the passage of aquatic wildlife in Flowerdew Hundred Creek. (James River Association) 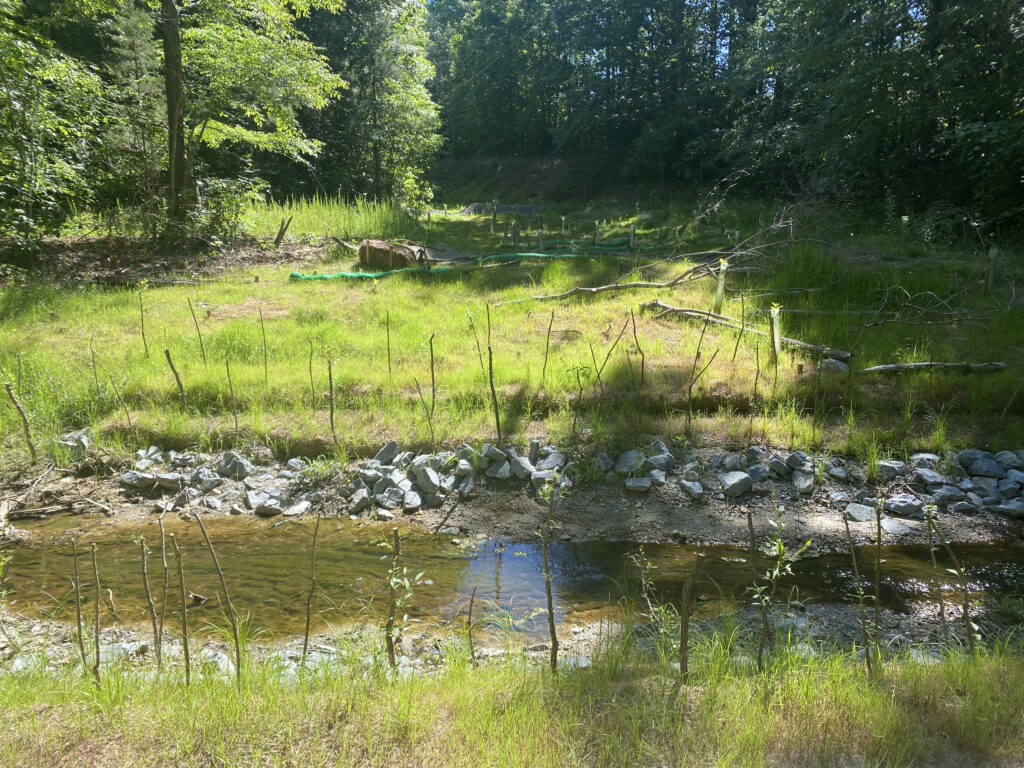 A flood of funding

More funding may be on the way for projects like Flowerdew Hundred that aim to reduce the impacts of roadways on aquatic wildlife.

The Bipartisan Infrastructure Law provides billions of dollars over a five-year period to grant programs that aim to improve fish passage and aquatic connectivity, including a brand new U.S. Department of Transportation Culvert Removal, Replacement, and Restoration Grant Program and a Wildlife Crossing Pilot Program.

“Our Fish Passage Program, we’re limited, we’re not getting nearly as much money as the DOTs are,” said Moss, referring to the National Fish Passage Program’s $200 million five-year budget. “We want to encourage VDOT to take advantage of all this other money that’s out there.”

Many of the federal programs that serve to benefit fish passage also benefit flood resiliency.

However, she warned, “having more funding available does not necessarily make the perfect project appear.”

“What I’m hoping over the next several years is that we find some quality projects and get those done rather than just trying to spend the money,” said Weaver. Instead, he added, it’s “about how many good quality projects we can get done.”

Across cultural lines, home schooling has boomed since… by Jeff South January 3, 2022
Development and poaching erasing years of work to protect… by Evan Visconti May 23, 2022
Trump’s fake electors: Here’s the full list by Kira Lerner June 30, 2022