Virginia’s answer to Greyhound shows rural areas are worth serving

Intercity bus service has been disappearing for decades, but Virginia is bucking the trend

A Greyhound stopping on the side of a rural road was once so common a sight that it continues to be a television trope despite the implosion of intercity bus service in America over the last half century. In 1970 — back when the U.S. population was just 205 million, the motorcoach industry recorded 130 million passengers; today, many cities and towns across the country are completely inaccessible if one doesn’t own a car.

However, a suite of state-branded buses in Virginia are proving a little bit of money can go a long way toward restoring intercity service.

From Danville to Dulles

Although the deregulation of the transportation industry in the 1980s benefited trucking, airline and freight companies, it decimated intercity bus service by triggering a wave of consolidation and route closures. Over the course of the past 50 years Greyhound alone has shed 86.9% of its bus operators. In 2013, with most of Virginia’s remaining motorcoach service limited to Interstate 95 and the I-64 corridor between Richmond and Hampton Roads, the Department of Rail and Public Transportation issued a study on how service could be restored to areas outside the Urban Crescent.

The first route, dubbed the Valley Flyer, begins in Blacksburg and makes its way north to Washington, D.C. via a handful of cities along the I-81 corridor and Dulles International Airport. With fares as low as $15 in an area of the state that has few to no other intercity travel options, the Flyer immediately exceeded ridership expectations.

With the model a proven success, in 2019 DRPT conducted an expansion alternatives analysis to identify other areas of the state that could benefit from their own Breeze bus. Southside Virginia soon emerged as a top candidate: In the two years since the launch of the Valley Flyer, Danville, Farmville and South Boston had all lost intercity service, leaving residents in two of the three localities no other options to leave town besides driving.

To restore service to the region, in August 2020 DRPT introduced two new Breeze routes. The Capital Connector starts in Martinsville and passes through all the cities that lost service plus Richmond before terminating in D.C. The Piedmont Express leaves from Danville and heads straight up Route 29 to the nation’s capital via Lynchburg, Charlottesville, a handful of other cities and Dulles. 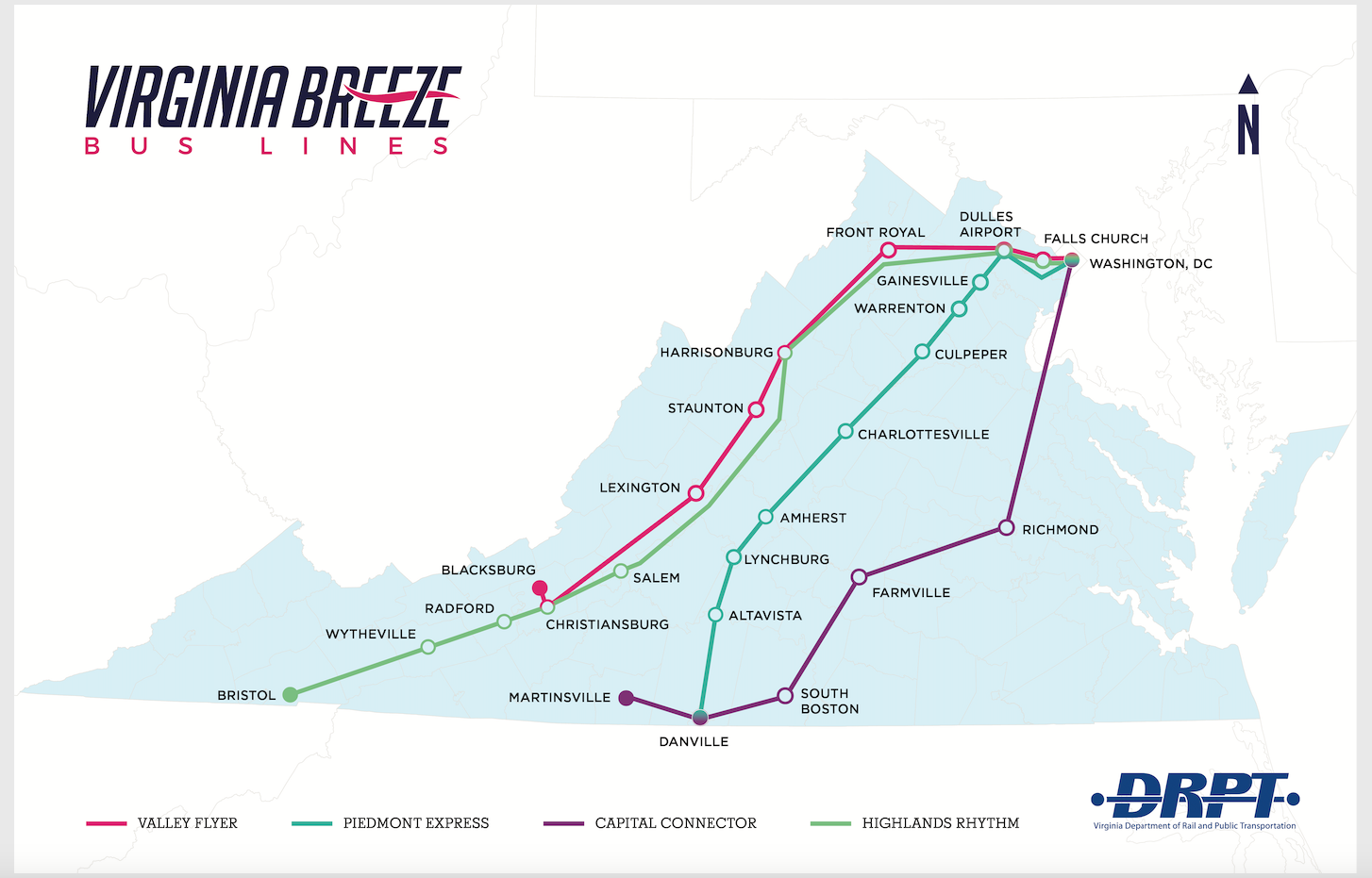 “In terms of filling gaps in intercity transportation, buses are very flexible,” said Jennifer DeBruhl, DRPT’s director. “We can adjust routes based on corridor needs to better serve our customers. We’re also able to provide smaller, rural communities connections to critical destinations like Dulles that otherwise wouldn’t have had any.”

With 2021 ridership on the Valley Flyer 27.8% higher than initial expectations, DRPT introduced a fourth Breeze route — called the Highlands Rhythm — to serve a similar corridor but with buses beginning in Bristol late last year. Although the two Southside routes have faced slower growth trajectories due to their launch at the height of the pandemic, the Highlands Rhythm is already showing signs of success in terms of reaching its ridership goals.

In search of infrastructure improvements

So far the best boarding numbers have come from Blacksburg, Christiansburg and Harrisonburg — all college towns buoyed by large student populations. Dulles and Danville also perform strongly. Where DRPT has been disappointed has been Charlottesville, a city with similarly few travel options and thousands of university students.

One recent rider was Michael Payne, a Charlottesville city councilor who admits that few folks in town have heard of the Breeze buses: “I don’t think the awareness or recognition is as big as it could or should be,” he said. “There are a lot of people who regularly commute to D.C. who would much rather take this than pay for gas, parking and the hassle of having a car in a city. The bus stop itself isn’t too prominent; it’s easy to walk by and not notice it. A permanent sheltered bus stop would make a big difference.”

Taking the @VABreezeBus, a new statewide bus service provided by the Virginia Department of Rail and Public Transportation

It runs 7 day a week & goes throughout all of Virginia to D.C. + includes a bus stop in Charlottesville 🚍

And it’s cheaper than paying for gas nowadays… pic.twitter.com/PkTMFv5Lt0

Currently, the Piedmont Express picks up riders on the side of the road at Barracks Row, a suburban strip mall two miles away from Charlottesville’s Amtrak station, Greyhound stop and Downtown Mall. DRPT has gotten some money from the I-81 Corridor Improvement Program to place shelters at stops for the Valley Flyer and Highlands Rhythm, but other routes lack infrastructure to protect riders from the elements.

State transportation officials said the problem is on their radar.

“As we continue to see ridership grow, we want to make sure that our waiting spaces are as pleasant as possible,” DeBruhl said. “That’s why we try to co-locate Breeze stops with local transit systems and VDOT park-and-rides to make the connection as convenient as possible for customers. It’s easier to make investments on state property; with private parking lots it’s harder.”

No matter the state of the stops, Payne plans to continue boarding the Breeze whenever he needs to get to D.C.

“It’s cheaper and less stressful for anyone flying out of Dulles or just going to D.C. for the weekend,” he said. “I probably saved $300-plus on gas, airport parking and everything else, not to mention not having to worry about driving myself in traffic.”

With ridership across all Breeze routes up 52% compared to last summer, DRPT may not be done expanding its intercity bus service. So far, all four routes introduced have served Southside and the western half of the state. Although both the 2013 and 2019 feasibility studies considered routes to Hampton Roads, the department may finally be ready to extend service to Tidewater Virginia.

“We are currently wrapping up an assessment of options to expand service in the eastern part of the state,” said DeBruhl. “We manage this system very actively with federal money dedicated to this purpose, so we’re focused on making good business decisions based on the success of the study.”

Previous proposals considered routes that began in Norfolk and/or Hampton and passed through Gloucester, Tappahannock and Warsaw before heading to D.C. via Fredericksburg and Reagan National Airport. Officials, though, emphasize that although the final route may have a stop or two in Hampton Roads’ seven cities, DRPT will not just be running buses along I-64.

“The point of the Breeze Bus program is to make rural connections,” DeBruhl explained. “There is already intercity bus service through the Urban Crescent, so this study is looking specifically at the Northern Neck and the Middle Peninsula where communities currently have no other connections.”

Virginia’s answer to Greyhound shows rural areas are worth serving