William & Mary geologist Rick Berquist discusses the Yorktown Formation, a geologic feature that he and Professor Jim Kaste have found to be related to increased radon levels in the Williamsburg area. (Sarah Vogelsong / Virginia Mercury)

WILLIAMSBURG — On the Environmental Protection Agency’s map of radon risks, Virginia’s coastal plain is a sunny shade of yellow.

Yellow is the best color to be on the radon map. Yellow is assigned to those areas that in 1993 the agency determined had the lowest potential for high levels of radon, a naturally occurring radioactive gas linked to lung cancer, to be detected in homes.

But yellow can also be deceptive.

Earlier this month, researchers at William & Mary announced the discovery of an apparent new hotspot for residential radon around Williamsburg, a city firmly in the coastal plain.

Using data from roughly 200 homes in the area tested for radon, geology Professor Jim Kaste and research associate and former Virginia state geologist Rick Berquist found that between 15 and 39 percent of the homes they tested had radon at levels above four picocuries per liter of air, the concentration of radioactivity chosen by EPA as its “action limit” for the gas. Furthermore, the higher levels appear to be connected to a geologic feature known as the Yorktown Formation. 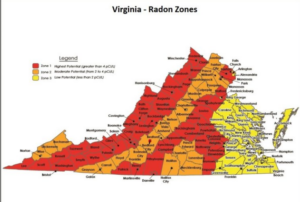 Berquist, who has been collecting data on radon in the region since 1989, said that he’s known for decades that there was likely “an issue with radon in homes built on the Yorktown” but until recently didn’t have sufficient data to prove it.

Now, “I’m pretty confident about what we’re doing,” he said. “We’re living in a time where if you see something, say something. But you don’t say something unless you know what you’re talking about.”

Ryan Paris, the radon coordinator for the Virginia Department of Health’s Office of Radiological Health, said state officials are aware there are radon hotspots around Virginia not represented on the EPA map and that “almost everybody out there agrees this map needs revision.”

“We do not advocate using that map or any other source of information to try to predict what your radon level is going to be in any particular house,” he said. “We have had elevated test results in every single one of those supposedly low-risk counties. The only way to know is to test.”

Residential radon concerns came onto most Americans’ radar in the 1980s, when engineer Stanley Watras set off radiation detectors while entering the Limerick nuclear power plant in Pottstown, Pennsylvania, — before it had any radioactive material onsite. State and federal officials subsequently found the average radon level at Watras’ house to be 2,500 picocuries per liter.

Colorless, tasteless and odorless, radon is produced by the decay of uranium, which is found in varying amounts throughout the earth’s crust.

Scientists have long known that radon concentrations are connected with geology.

“Because of the known presence of uranium-bearing materials in some of the rocks that compose the Piedmont and Blue Ridge, these provinces are more ‘suspect’ than the Coastal Plain, the Valley and Ridge, and the Appalachian Plateaus,” wrote a task force convened by Virginia’s secretary of human resources in 1988 to study the risks of residential radon.

Thirty years later, a study by the Office of Radiological Health on whether radon testing and mitigation professionals should be licensed added a caveat: “It should be understood that areas in Tidewater, not to mention the commonwealth at large, have pockets of elevated radon levels due to the existence of mineable-quality uranium.”

While not linked to mining, Berquist and Kaste found such a pocket throughout the fossil-heavy Yorktown Formation, whose high concentrations of uranium appear to be linked to the high levels of radon detected in homes built above or into it. The researchers have since developed an interactive radon risk assessment map for the Williamsburg area.

“We want to know how the uranium got in there,” said Berquist. Multiple theories related to fossil composition, geologic events and ground and water chemistry are possible, he added. “I don’t know the exact mechanism.”

How radon gets into houses is clearer: Because it is a gas, it is capable of moving through rock fractures and soil and therefore can seep inside houses, where it can get trapped.

As a result, the highest levels of radon tend to be found in basements or lower levels. Ventilation has a significant effect on how much radon is in a home, as does weather and the time of year, with radon levels highest in the winter and lowest in the summer.

At high, sustained concentrations, the gas can have severe impacts on human health. The EPA has identified indoor radon as the second leading cause of lung cancer in the U.S. The agency estimates that 21,000 people in the country die every year because of radon, although some scientists dispute the figure.

“I would not want to be living with radon,” said Berquist. “It just doesn’t make sense to be breathing a radioactive gas.”

The 4 picocurie per liter action limit set by EPA is intended to serve as a trigger for homeowners to take action to reduce the amount of radon in their houses. But Paris also said the standard is “pretty conservative” and assumes that a person is exposed to that level for 8 to 12 hours a day over 70 years.

Four picocuries per liter “is certainly enough to be concerned about, but it’s not going to mean people drop over dead of lung cancer tomorrow,” he said. “There’s no reason to be alarmed for the levels they’ve found in Williamsburg.”

‘The only way to know is to test’

For policymakers, residential radon has proved a particularly thorny problem because of how variable levels can be depending on home location and design.

As a result, health officials say testing is the best way to identify any issues. The Virginia Department of Health offers Virginia residents radon testing kits for $3, and residents can also hire a professional, who under Virginia law must be certified by either the National Radon Safety Board or National Radon Proficiency Program to run tests.

“The only way to know is to test,” said Paris.

Real estate transactions have typically been popular times to run tests, but no state requires that they be done at the time of sale. (In Virginia, all new school buildings, however, must be tested for radon by law.) Nor does Virginia require any of its roughly 400 radon testing professionals to report their results to the state: Paris asks for testing data to be shared with VDH on a voluntary basis every six months but said only about 20 to 40 percent choose to do so.

“I don’t have anything in the code right now that would compel them to make them share their data with me,” he said.

With the available data, VDH has begun work on its own radon risk map. Berquist and Kaste are also continuing their own work in the Williamsburg area in hopes of conducting testing in James City, York and other surrounding counties.

State work is slow, however. Virginia’s radon program is funded by an EPA grant that requires a 40 percent match from the state. With no general funds dedicated to the program, the match is drawn from revenues generated by other work in the Office of Radiological Health.

“It strictly limits our ability to grow the program, because we can’t get it any bigger than the match that we can afford,” said Paris.