A coal terminal adjacent to Newport News’ Southeast Community has been the source of air pollution complaints for decades. Virginia’s Department of Environmental Quality is now setting up an air monitoring program. (Sarah Vogelsong / Virginia Mercury)

NEWPORT NEWS — The southernmost tip of Newport News, where the James River makes its last turn before meeting the Chesapeake Bay, is never still.

This is a place of coming and going. Every year, millions of short tons of coal flow by train into yards owned by Kinder Morgan and Dominion Terminal Associates and then leave by ship to head overseas. Just adjacent, vessels at Newport News Shipbuilding bound for the U.S. Navy and other buyers are perpetually rising above the waters. And through it all winds Interstate 664, one of just three arteries to cross the miles of water that divide the city from Norfolk.

At the center of this vortex sits the Southeast Community, a low-income, largely Black neighborhood where residents have for decades been complaining of heavy air pollution that darkens their homes and sickens people.

“Our community is saturated with particulate matter because of all the things that have happened around us,” said Newport News Vice Mayor Saundra Nelson Cherry.

This year, the Virginia Department of Environmental Quality is beginning a three-year study to put some numbers to what’s in the air in Newport News’ East End and another low-income, majority-Black area in Norfolk named for the Lambert’s Point coal terminal operated by Norfolk Southern there.

“We’ll be able to know what the concentrations are across the area of the community to a better degree than we have in the past, and we’ll know if there are any areas that maybe have issues that need to be addressed,” DEQ air quality manager Charles Turner told residents at a community meeting earlier this month.

DEQ is touting the Tidewater Area Monitoring and Evaluation project as a step toward addressing what officials acknowledge has been a long-standing concern.

Particularly valuable, they say, will be the installation of five air monitors as well as a variety of sensors that will measure levels of particulate matter and various toxic metals in the region’s air.

But while residents say they are pleased Virginia is finally conducting comprehensive air monitoring, many remain openly skeptical that the study, which is being funded by a $526,000 grant from the U.S. Environmental Protection Agency, will lead to real change.

“They keep on doing comprehensive studies and that’s all they do,” said Ernest Thompson, a resident who grew up in the Southeast Community and then returned as an adult in 2000.

“Everyone down there knows there’s a problem,” said George Covington, another resident who owns 10 rental units in the neighborhood. “And the problem starts and ends with a lack of management and a lack of state representatives and the governor doing anything about the community. Nobody addresses the problem.”

Both Newport News’ East End and Norfolk’s Lambert’s Point have been at the center of complaints about coal dust brought to the General Assembly since the 1980s.

According to old news accounts, residents began bringing complaints about coal dust pollution to the State Air Pollution Control Board in 1983 after the opening of Newport News’ modern coal terminals.

Studies in 1985 and 1987 confirmed that coal dust was coming from both the terminals and the railcars shipping coal to them. One December 1985 article from United Press International reported that “1,000 tons of the 90,000 tons of coal shipped in open carriers to Newport News and Norfolk terminals disappears into the air.”

The Newport News terminals subsequently developed a “wet suppression” system for their coal piles, which DEQ calculated had reduced dust emissions by 80 percent. Railcars remained the subject of political wrangling: even today, railroads are not required to cover cars carrying coal as they travel through the state, although Norfolk Southern is required to submit an annual report to the General Assembly on the measures it’s taken to reduce emissions from its cars.

Today, Kinder Morgan spokesperson Amy Baek said the coal piers operated by the company use a variety of measures to control air emissions. Stockpiles are “wet suppressed” with 20,000 gallons of water every hour, while railcars carrying coal are unloaded in enclosed buildings and water is also used to keep down dust during vessel loading, she said.

Newport News Mayor McKinley Price told the Mercury that while he believes pollution has gotten better over time, the issue still hasn’t been resolved.

“We don’t know the magnitude of the problem,” he said.

Residents are adamant a problem still exists. While 2014 data on the Hampton and Peninsula health districts, which include Newport News, show lower incidences of chronic obstructive pulmonary disease compared to the rest of the state, asthma incidence in both districts was higher than the state average. Most critically, a 2005 study by the Peninsula Health District found the Southeast Community has asthma rates twice those of the city and state.

Quality of life is also reduced, said Covington. Many of his tenants are unable to keep outdoor furniture in their yards or hang out clothes to dry because of coal dust, and he estimates that the constant need to change overburdened air filters costs him some $12,000 to $15,000 per year.

But both DEQ and many of the residents who turned out this April to discuss the monitoring project made it clear that coal dust likely isn’t the only issue. Instead, multiple sources of pollution are affecting air quality in the region. Several pointed out that the heavily trafficked Interstate 664 — which sees regular rush hour backups and is the primary southbound conduit for Outer Banks traffic in the summer — has no vegetation or sound barriers that could help minimize pollution where it crosses through the Southeast Community.

Thompson said that’s no accident: “You’ll notice only in Black communities, that’s where these things happen,” he said.

One of DEQ’s main goals with the Tidewater Air Monitoring and Evaluation project is to ensure local communities are involved in and well-informed about efforts. At the April community meeting in Newport News, officials encouraged residents to enter proposals for sites where air monitors should be placed into a computer and pledged transparent communication.

Nevertheless, some residents expressed frustration, particularly about what they described as a lack of coordination with community members who have been heavily involved with prior studies, including the Southeast CARE Coalition that was instrumental in a 2016 EPA-funded effort to identify environmental health problems in the community. 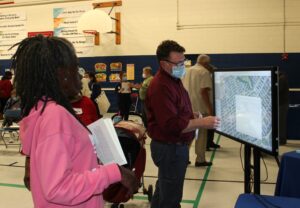 “What part of our collaborative coalition of this community was involved with your grant proposal?” Rosa Turner asked DEQ officials. Told that agency employees had been the primary writers of the grant application, she responded: “Somehow that grant still should have had the coalition involved in that, even as your stakeholders.”

Angela Harris of the coalition also complained about the absence of Virginia Department of Health officials, which she called “rude” and “disrespectful.”

For some, studies have simply been exhausted as a solution. Litigation, they said, may be the most fruitful route.

“I think in reality the City of Newport News, the owners of those coal terminals know a class-action suit is on the horizon,” said Thompson.

It was a sentiment sharedby Rosa Turner at the April meeting.

“I’d love to see you all do a class-action lawsuit,” she said. “DEQ is wonderful, but part of your job is regulation — recommendation for regulation, and if there’s not going to be a regulation recommended coming out of this, then you’re not telling your citizens what they’re going to get from this study.”