The wood turtle is listed by the Commonwealth of Virginia as threatened. (Photo by ​​I. T. Wilson/ Department of Conservation and Recreation’s Natural Heritage Program)

Following an announcement in September from the U.S. Fish and Wildlife Service that 23 species should be declared extinct, Virginia’s environmental scientists are feeling the pressure to learn more about the commonwealth’s endangered and threatened species so they can be protected.

“That list really highlights that extinction is not just a down-the-road possibility; it’s a very real possibility that can happen now,” said Anne Chazal, chief biologist at Virginia’s Department of Conservation and Recreation’s Natural Heritage Inventory. “People think of it as a tropical rainforest issue or an arctic tundra issue, but this is happening in the rivers and forests of Virginia.”

The U.S. Fish and Wildlife Service lists 71 endangered and threatened species living in Virginia. The list is made up of fish, amphibians, reptiles, invertebrates, birds, mammals and plants.

The convergence of northern and southern habitats spanning from the Blue Ridge Mountains to the Atlantic makes Virginia ecologically unique, according to Tom Akre, program scientist at the Conservation Ecology Center at the Smithsonian’s National Zoo and Conservation Biology Institute.

“Ecologically, Virginia is an amazing crossroads, and as a result, we have amazing biodiversity and lots of species that are threatened and endangered because they were naturally on the margins of their ranges anyways or naturally not super abundant across wide ranges,” said Akre.

Matthias Leu, associate biology professor at William and Mary, said he is concerned about the future for many of these species.

“I don’t think it’s looking very good,” said Leu. “We’re worldwide losing a lot of species across all taxons, and the sad part for a lot of these species is we don’t even know how well they’re doing before all of a sudden they’re gone.”

Sara Zeigler, a research geographer at the U.S. Geological Survey’s Coastal and Marine Science Center, said endangered species are often threatened by changes to their habitat.

“It’s this constant conflict between habitat and people,” Zeigler said.

In Virginia, Zeigler analyzed the habitat of the piping plover, a threatened shorebird that nests along Virginia’s barrier islands during the spring and summer. The piping plover requires wash-over habitats, which are created when an event such as a storm pushes sand and dunes from the beach further inland, covering much of the vegetation.

“That allows the birds to nest further back from the ocean shoreline so the nest isn’t in danger of being flooded,” said Zeigler. “It gives them a lot of visibility so they can see any predators coming from shrubs or grasses on the interior. It also gives them access to the back side of the barrier which is where they bring their chicks to forage after they hatch.”

When shorelines are developed and communities build sea walls or engineer dunes to protect from flooding, those overwash features that provide a habitat for piping plovers disappear, said Zeigler, and so do the piping plovers.

The endangered red-cockaded woodpecker is experiencing a similar problem further inland. It requires large swaths of mature pine forest to survive due in part to the fact that it is the only woodpecker that excavates nesting cavities in live trees, according to Brian van Eerden, the Nature Conservancy’s Virginia Pinelands Program director.

The southern longleaf pine forest historically provided tens of millions of acres of suitable habitat spanning south from Virginia to Florida and east all the way to Texas. “The red-cockaded woodpecker filled that niche with a large communal population structure,” said van Eerden. 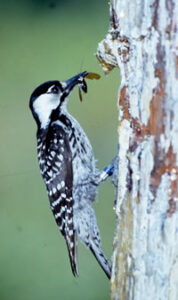 Much of the southern pine forest was developed for agricultural land and harvested for timber. The natural role of fire in shaping the forest ecosystem was also curtailed. Without fire, the forest becomes thick and overgrown, limiting the abundance of herbaceous vegetation and causing a chain reaction that adversely affects the red-cockaded woodpecker’s source of food: insects, said van Eerden.

“We now have a stable enough population that we can safely contribute juvenile birds to other recovery areas, like the Great Dismal Swamp,” said van Eerden. “That’s a very convincing example of how we used science and some of the best ecological forest managers to drive population growth.”

Relying on the science

Conservation efforts across Virginia depend on scientists to monitor species’ populations and determine what a particular ecosystem or species needs in order to survive. This often requires teams of scientists to go into the field to collect data and make visual assessments.

“We really need to be outdoorsy people who enjoy going out early in the morning and late at night to get bitten by mosquitos,” said Leu. “We are always pointing into the landscape and assessing the diversity at those points, so we need to be really well versed in recognizing bird songs and frog vocalizations and identifying plant species.”

Christopher Davis, a fisheries biologist at the Virginia Marine Resources Commission, monitors endangered Atlantic sturgeon and sea turtles in Virginia waterways as part of the Protected Species Observer Program. Davis teams up with commercial gillnet fisherman to study and track any sturgeon or sea turtles that get pulled up as accidental bycatch.

If a sturgeon is caught, Davis sticks a transponder tag in it to track its movements after it is released. “We get length, weight and document any injuries that we see,” said Davis. “Then we get a fin clip for a DNA sample and we release it.”

Different types of tags are used to monitor sturgeon movements. A VEMCO tag utilizes a string of receivers across the Chesapeake Bay Bridge Tunnel that pings the tag when it comes within range to give scientists an estimate of the number of fish coming in and out of the bay.

Additionally, scientists are utilizing new technology that can detect environmental DNA, or eDNA, in a given ecosystem to determine whether a species is present, said Akre, who used eDNA to detect threatened wood turtles in Virginia.

“In the places we worked in northern Virginia, eDNA was almost as effective as visual encounter surveys at finding wood turtles, and it’s significantly cheaper because you don’t have to pay all these people to go out there and do these surveys,” said Akre.  “You don’t get an understanding of how abundant the populations are, but it is a great surveillance tool and a fairly cheap one.”

Scientists essentially take a sample of water (land and air eDNA samples are still being developed) and test it to see if they can find a particular species’ DNA. If the DNA is found in the water sample, scientists now have reason to believe that the species can be found in that ecosystem.

Brian Watson, the statewide aquatic invertebrate biologist at Virginia’s Department of Wildlife Resources, said eDNA is starting to be used to look for certain species of mussel, but the science is still in the works.

Virginia is home to a wide diversity of freshwater mussel species, several of which are endemic, or only found in one particular location. Due to freshwater mussels’ immobility, complex breeding process and overall sensitivity to changes in their ecosystem, they make up the largest portion of Virginia’s federally endangered species, said Watson.

“eDNA, if it works properly, will allow you to get into a lot of sites rapidly and at least get an answer to the question of whether a particular species is present there or not,” said Watson. “It’s definitely an interesting tool that we are pursuing for freshwater mussels.”

Given freshwater mussels’ stream bottom habitat and the sheer miles of waterways in Virginia, surveying with traditional methods can be difficult and time consuming, according to Watson.

Watson sees drawbacks in potential false positives or negatives with the use of eDNA, but Akre and other scientists around the world are working to make eDNA more reliable and eventually have the ability to measure population abundance.

“If we can use eDNA for abundance, then we can use it beyond just surveillance but also for monitoring how well a population is doing,” said Akre. “It does have great value in Virginia for detecting rare and endangered species.”

Across cultural lines, home schooling has boomed… by Jeff South January 3, 2022
Fire was once the forester's enemy. Now it's a tool… by Sarah Vogelsong May 4, 2021
Va.’s freshwater mussels are vanishing. Can a state… by Sarah Vogelsong November 15, 2021