‘Resilience in the face of horror and pain’: Emancipation and Freedom Monument unveiled in Richmond

‘For too long, our history has not told their story’

A pair of 12-foot statues designed by Thomas Jay Warren of Oregon — representing a man, woman and infant newly freed from slavery — are part of the new Emancipation and Freedom Monument on Richmond’s Brown’s Island. (Julia Rendleman/ For the Virginia Mercury)

Just weeks after the last Confederate statue on Richmond’s Monument Avenue was removed, a long-anticipated monument to emancipation was unveiled Wednesday on Brown’s Island.

“Resilience in the face of horror and pain is what this day is all about, which is why a little rain and a train are not gonna stop us,” State Sen. Jennifer McClellan, D-Richmond, chair of the legislature’s Dr. Martin Luther King Jr. Memorial Commission, which commissioned the Emancipation and Freedom Monument, told a crowd shielded from the rain by umbrellas, ponchos and tents.

The monument project began nearly a decade ago as an initiative to commemorate the 150th anniversary of the Emancipation Proclamation and abolition.  The pair of 12-foot bronze statues, representing a man, a woman and an infant freed from slavery, was designed by artist Thomas Jay Warren of Oregon. It honors 10 African American Virginians, five from 1866 to 1970 and five from the period before emancipation.

“Emancipation was not a moment, it was a movement that began when this country began and Virginia was the center of the struggle,” McClellan said. “Virginia, the birthplace of American democracy, was also the birthplace of the American slave trade. Virginia, with its leaders who wrote the founding documents that promised life, liberty and the pursuit of happiness for all, and a government by, of and for the people and yet those very men owned people that they considered three-fifths human.” 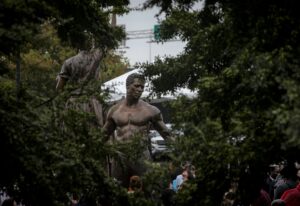 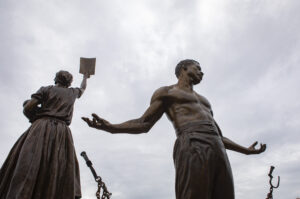 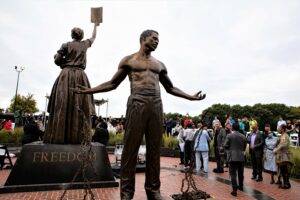 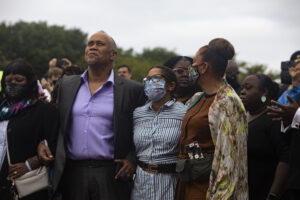 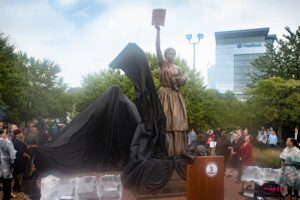 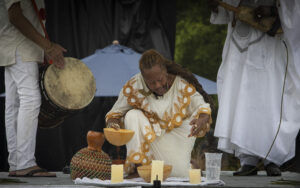 Richmond Mayor Levar Stoney said the monument, unlike the Confederate statues that have come down in the city since the racial justice protests of 2020, “will withstand the test of time.”

The names honored on the base of the monument were selected from a list of more than 100 nominations after a lengthy round of public hearings and narrowing by a commission workgroup.

“Here in Virginia we have worked to tell a more full and comprehensive story of our shared past,” said Gov. Ralph Northam, who referenced his decision to remove a towering tribute to Confederate Gen. Robert E. Lee on state-owned land on Monument Avenue. “Part of that effort has been to take a hard look at who and what we have put up on pedestals in this commonwealth and ask if they truly should be there. …  Just a couple weeks ago, one of my proudest days, we took down a statue of a man who led an army to stop the emancipation and freedom these figures symbolize.”

The Virginians honored on the monument are:

“For too long, our history has not told their story,” said Del. Delores McQuinn, D-Richmond, a member of the commission. “The fight for freedom has been anything but easy. Yet through it all, African Americans have remained resilient in the face of oppression.”

‘Resilience in the face of horror and pain’: Emancipation and Freedom Monument unveiled in Richmond

At General Assembly's halftime, consumers hold a narrow lead by Ivy Main February 8, 2021
Democrats have controlled Virginia government for… by Ned Oliver March 3, 2021
Can Southwest Virginia remake itself as a laboratory… by Sarah Vogelsong September 20, 2021