A farm in Highland County. (Sarah Vogelsong/ For the Virginia Mercury)

Land conservation groups angered by the Northam administration’s portrayal of a popular tax credit program as inequitable say that instead of diverting its funding to more targeted grant programs, the General Assembly and the governor need to channel more money to conservation broadly.

“We agree we should fully fund the grant programs, and the land conservation community has advocated for that for 20 years,” said Ellen Shepard, executive director of Virginia’s United Land Trusts. “But it shouldn’t be one or the other. It should be both.”

In an August presentation to the state’s Commission to Examine Racial and Economic Inequality in Virginia Law, Secretary of Natural Resources Matthew Strickler called land ownership and land conservation incentives “relics of a past that has actively discriminated against people of color.”

“Simply continuing to give huge tax breaks to a largely White landowning class in order for them to continue to keep doing what it is that they’re already doing is not a 21st-century land conservation policy, and it’s certainly not equitable,” he said at the Aug. 24 meeting.

Several high-profile land conservation groups, however, objected to Strickler’s portrayal of the tax credit program and criticized two agency reports on which it heavily relied.

Ebonie Alexander, executive director of the Black Family Land Trust and a member of the Virginia’s United Land Trusts board, said that the presentation “came out of the blue.”

“I wonder why this was the forum he used to present his facts as he saw them,” she said.

Strickler’s presentation drew extensively on a report by the Virginia Department of Conservation and Recreation that found that over 95 percent of the state’s $1.8 billion in conservation spending over the past two decades has gone to the tax credit program. Of that spending, more than 30 percent has gone toward land conservation in the historically wealthy and White-dominated counties of Loudoun, Albemarle, Fauquier, Culpeper and Orange.

Another report by the Office of the State Inspector General released in July concluded that the state was getting “lower quality” results from easements linked to tax credits valued at less than $1 million, a threshold that triggers agency review.

Other findings suggested that standards ensuring easement quality may be lacking. One easement property visited by a state inspector was criticized for having scrap metal, old tires, inoperable vehicles and a manure storage area with cattle parts on it.

Several representatives of conservation groups said the reports grossly misrepresent the reality of how conservation works on the ground and ignore other factors such as historical land ownership patterns.

Richards, Alexander and Shepard all pointed to the Piedmont Environmental Council, a half-century-old nonprofit headquartered in Warrenton, as a key reason for why tax credit adoption has been so high in counties like Loudoun and Albemarle. All five of the counties cited in the agency report as representing 30 percent of the state’s conservation spending fall within PEC’s footprint.

At the time the land preservation tax credit program was instituted by the General Assembly in 1999, “we were already there, on the ground,” said Dan Holmes, the council’s director of state policy.

“When you have that level of boots on the ground and a program is initiated, it’s not so surprising that some of the early adopters are areas that had 30 years of education about the tools,” he said.

“Land in Loudoun County and Albemarle County is some of the most expensive land in the state. That land is simply more valuable by any metric than a comparable 1,000 acres in, say, Charlotte County,” she said. “Of course the cost of the tax credits is going to be higher in Northern Virginia.”

The conservation groups argued that data show that since the tax credit program began in 1999, acreage placed under easement has increased throughout the commonwealth as land trusts have become more widespread and public confidence in the program has increased. 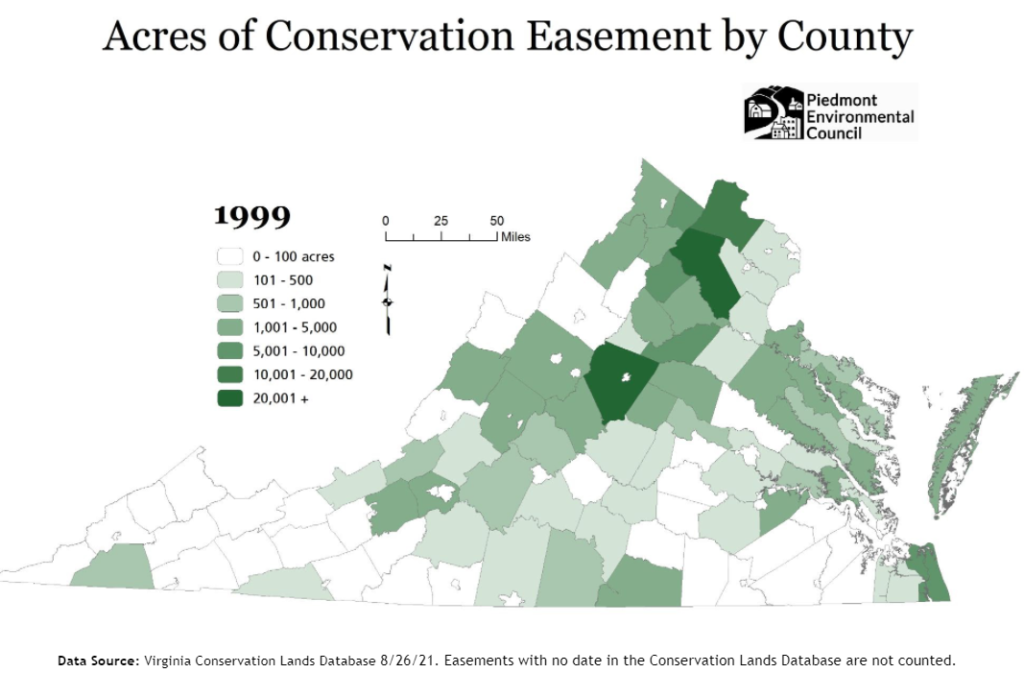 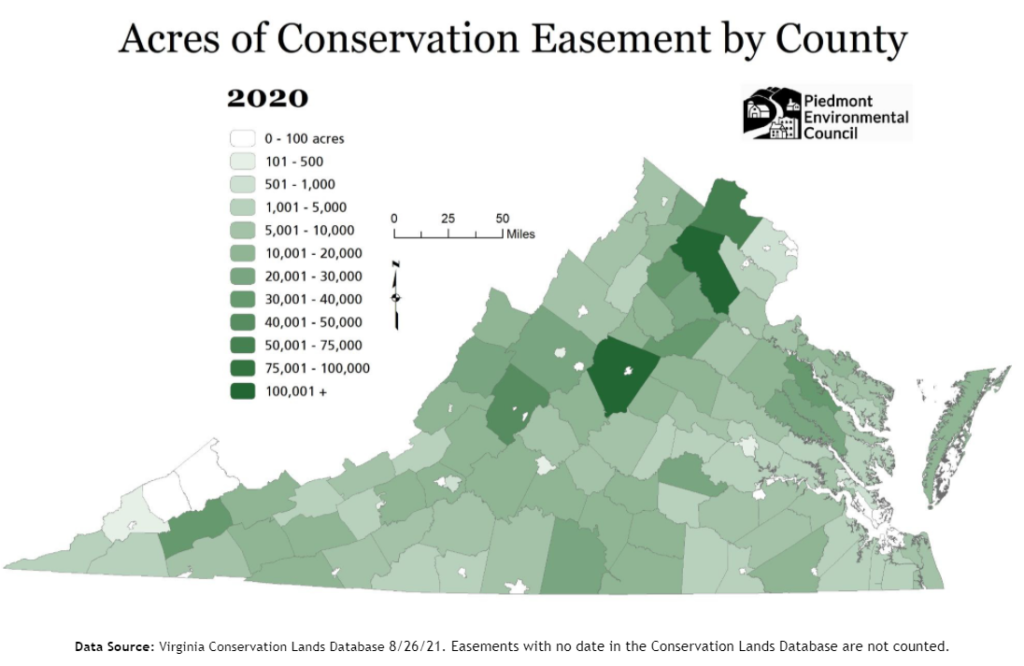 Easement agreements can take years or even generations to obtain, said the conservationists, especially in areas where communities have a history of land losses to discriminatory policies. Heirs’ property — property passed down in the absence of a will to multiple descendants over the years — has proven especially problematic for Black communities, where it may account for a third of all land owned: the U.S. Department of Agriculture has called such property “the leading cause of Black involuntary land loss.”

“For a group of people who have had land lost, land stolen, land taken from them under very dubious conditions, for someone to come up to them and say, ‘Listen, we’re going to pay you to keep your land’ … It’s oxymoronic in the minds of many people that the same people who they perceive have been trying to take their land for 100 years now all of a sudden are going to pay them to keep the land and to continue to do with the land what they were doing,” said Alexander.

As trust has increased, the tax credit has become “one of the most accessible tools for landowners to conserve their land,” said Shepard.

All four conservationists argued that rather than diverting money from the tax credit program, the state should make what Holmes called “a true commitment” to funding existing conservation programs, many of which he said have been “woefully and inconsistently funded.”

Demand for more targeted conservation funding has long outstripped General Assembly allocations. As the August Department of Conservation and Recreation report noted, requests for Virginia Land Conservation Foundation grants were more than $106 million in 2019, with only $5.9 million ultimately awarded. In 2020, requests were almost $80 million and $3.4 million in projects were funded.

“We need every tool in the toolbox right now. … Taking away the tax credit or transferring the money to someplace else, I don’t know (that) would solve the problem,” said Alexander.

Richards too said that eliminating the tax credit program would “do nothing to reverse the inequity in access to land.”

“Further, to cut back on the tax credit now, just when more and more underserved landowners are gaining access to it through improved service from groups like Blue Ridge Land Conservancy, Black Family Land Trust, and (Virginia Outdoors Foundation), would really cut those landowners and communities off just as they were getting off the ground,” she wrote in an email.

The July OSIG report also received heavy criticism: working farms “are not Norman Rockwell pretty,” and the presence of old machinery is not uncommon, said Alexander.

To look at 25 easement properties out of roughly 4,400 in the state “and make sweeping generalizations about the program is really a disservice to the commonwealth,” said Richards.

Across cultural lines, home schooling has boomed since… by Jeff South January 3, 2022
Can Southwest Virginia remake itself as a laboratory for… by Sarah Vogelsong September 20, 2021
Virginia doesn’t have licensed poker rooms. A state gambling… by Graham Moomaw September 28, 2021