POWHATAN — More than a year after the dozens of solar panels that blanket the roofs of Powhatan Elementary and Powhatan Middle School hummed to life, state and county officials finally cut the ribbon on the project.

“In 2020, when the General Assembly passed the Virginia Clean Economy Act, this is what we were forecasting,” said Sen. Ghazala Hashmi, D-Chesterfield. “This is what we hoped for.”

But while the Powhatan solar arrays were illustrations of one of the Clean Economy Act’s goals of expanding school and local government solar, they were also representative of another force that has shaped those plans for the past 15 months: COVID-19.

Since the Virginia Clean Economy Act went into effect on July 1, progress on school and government solar has slowed considerably. In 2019, according to records from the State Corporation Commission, developers in Dominion Energy territory filed applications for 84 projects to supply solar to public institutions through a financial tool known as the power purchase agreement. Installations from completed projects were significant enough to land Virginia on a list of top 10 states for school solar capacity.

Then came a double whammy. The state program that authorized solar power purchase agreements was halted for several months in January 2020. Soon after, COVID-19 shut down the state. Between May 2020, when Virginia began accepting project applications again, and June 1 of this year, only 23 applications were filed.

“There’s no question that during this global health crisis — which started right as the Virginia Clean Economy Act was passed — we saw schools, local governments, and non-profits shift and narrow their attention to addressing the impact of the pandemic directly,” said Rob Corradi, director of public affairs at Sun Tribe, the most active developer in Virginia’s school and government solar market.

Although much of Virginia’s electricity is supplied through monopoly utilities, state lawmakers have shown an interest in recent years in allowing public authorities to obtain solar energy from third-party companies as a way to bring down costs.

Many solar adopters can reduce the price of installing panels through federal tax credits, but schools and local governments are tax exempt and therefore receive no benefits from such incentives.

Power purchase agreements offer a way around this problem. Under this arrangement, a developer installs solar panels on customers’ property and then sells the electricity back to them, usually at a lower price than the utility offers.

Schools have been eager to reap the savings associated with solar PPAs — and in many cases to incorporate solar panels into their curricula. But regulated utilities like Dominion and Appalachian Power historically balked at their use, contending  that the loss of customers to third-party providers unfairly shifts broader system costs to the remaining customers.

While Virginia began allowing PPAs in 2013, participation in Dominion’s program was capped by law at 50 megawatts; when that ceiling was hit in January 2020, program enrollment was closed. Appalachian Power’s cap was even lower, and a contract between the utility and public authorities in its region effectively prevented agreements from being struck.

The Virginia Clean Economy Act eased many of those restrictions by significantly raising the program caps, from 50 to 500 megawatts in Dominion territory and from seven to 40 megawatts in Appalachian Power territory.

But numbers and interviews with two key developers involved in solar PPAs in Virginia reveals that COVID-19 dampened further growth.

Faced with moving entire student bodies to virtual learning or hybrid models, many school systems put solar plans on pause. Contracts and requests for proposals that required school board approval also were pushed to the bottom of agendas. Few of the burst of applications filed before the initial Dominion cap was hit in January 2020 — Sun Tribe filed applications for 28 projects on Oct. 30, 2019, alone — have been completed.

Corradi of Sun Tribe said despite the slowdown, projects seem to be picking up again. Several public authorities have put out requests for proposals in recent months, including the Virginia Community College system.

“We’re seeing a growing momentum for on-site clean energy in Virginia and have been having more conversations with schools and local governments as they look toward their long-term infrastructure planning,” said Corradi.

In the wake of the pandemic, Loeb recommended that the State Corporation Commission “do a full audit of the status of all the projects in the pipeline to determine whether projects have the financial and institutional support to advance to commercial operations.”

Other barriers are lifting. On Wednesday, Appalachian Power announced that its new contract with public authorities would allow up to 40 megawatts of power purchase agreements, in line with legislation. Under the prior contract, the company noted PPAs had not been “explicitly available.”

“These schools have not only experienced lower carbon footprint and generated energy savings, but these energy savings can be invested back into the classroom where they belong,” said Dominion director of customer energy solutions Todd Headlee. But, he added, “We can’t do this alone. It takes public policy support. It takes willing partners at the local level.”

For Virginia, adapting to sea level rise starts with choosing a curve 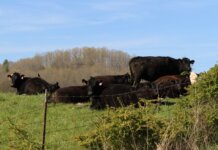