Republicans around Virginia streamed into voting sites Saturday to choose their nominee for governor, and in Caroline County, Don Denton was first in line.

He said he was backing Amanda Chase, a state senator who ran a hard-right campaign and pitched herself as “Trump in heels” despite the former president’s overwhelming losses in Virginia, which has grown progressively bluer in the 11 years since a Republican last won a statewide election.

A 73-year-old former Marine sergeant, Denton compared Chase’s tactics — which have made her a pariah to many mainstream Republicans and a populist champion for those who prefer more combative politics — to military leaders ordering soldiers to take a hill knowing “a certain percentage of them” will die.

“That’s the responsibility of leadership. And it’s not easy,” Denton said, arguing moving toward the center hasn’t worked well for Republicans in the past. “If you don’t want to make those hard decisions, don’t be a leader.”

There were no easy answers Saturday evening for which direction Virginia Republicans have chosen to go in an election widely seen as one of the party’s first big tests of the post-Trump era. The GOP chose a convention over a primary to select its nominees for governor, lieutenant governor and attorney general after a protracted battle among leadership and isn’t expecting results until early next week because the party opted to transport all the ballots to Richmond, where they will be hand-counted in successive rounds to accommodate a complex weighting and ranking process.

Party officials were unable to provide official turnout statistics Saturday showing how many ballots had been cast, but multiple campaigns estimated about 30,000 ballots were cast overall, a turnout that would represent less than 60 percent of the 53,000 registered delegates. State GOP Chairman Rich Anderson released a statement saying the party “could not be happier with how smoothly and efficiently our convention was run.”

“We would also like to assure all the convention delegates that their ballots will be counted fairly and accurately — leaving no room for doubt or question as to whom our nominees will be,” Anderson said.

Continuing a trend of preemptively casting doubt on the process, Chase took to Twitter a few hours after the polls closed to again threaten an independent run “if RPV steals this election for Pete.”

Meanwhile Pete Snyder, an entrepreneur from Northern Virginia, projected confidence Saturday night, posting a statement on Twitter in which he said he doesn’t care how long it takes to tally the ballots and “I think we all know what the outcome is going to be.”

The candidates’ supporters offered differing perspectives about the party’s prospects in November as they cast ballots.

Many of Chase’s supporters said they were unconcerned about her general-election appeal, often because they said they doubted the validity of past election results, echoing former President Donald Trump’s false claims of widespread election fraud.

But for other candidates’ delegates, the question of electability was often top of mind as they cast their votes, and many made it clear they were unimpressed with Chase’s style on the campaign trail.

“At first she was halfway decent, but she just lost it,” said Craig Suro, a real estate agent from Goochland, as he cast his vote at a veteran’s hall in Amelia County. “She’s gone far right and the problem is she’s not electable in the general. Why waste your vote on someone that’s not going to win?”

Suro and his friend, Ted Underhill, said they both cast their first choice votes for Snyder, who, like Chase, ran to the right of the field but picked up more establishment support along the way, with endorsements from GOP leaders in Virginia who most openly embraced Trump, including former Attorney General Ken Cuccinelli and Del. Dave LaRock, who spearheaded a push to convince Vice President Mike Pence to reject the state’s election results.

“I think he’ll move more toward the middle,” Underhill said. “I hope he does, because if he goes too far right, it is a concern.”

Glenn Youngkin, the former chair of the massive investment fund Carlyle Group, also appeared to have won over a substantial share of delegates, many of whom said they ranked him highly alongside Snyder because they said the state party needed to move in a new direction, something they didn’t think the sitting elected officials in the race would deliver on.

“I think the thing I approve of most about what Donald Trump showed us is that professional politicians are probably the worst news that we could have for our country right now,” said Jim Tucker, a commercial real estate broker who wore a sweatshirt with an American flag fashioned out of guns. “Whether you like Donald Trump’s personality or not, he made a lot of progress in government by looking at it from a businessman’s eyeballs and attitude and values.”

Cox had made his potential general election appeal central to his campaign, often reminding voters that he holds the bluest seat of any Republican in the state’s House of Delegates. And he was the only candidate to explicitly campaign to be voters’ second choice, a strategy based on the belief that it is unlikely any candidate will win the requisite 50 percent of votes on the first round of counting.

Outside a voting site at the Prince William County Fairgrounds, former Republican state Del. Scott Lingamfelter, who lost his seat in the 2017 Democratic wave, said Cox was his top choice due to the former House speaker’s relationships and institutional knowledge, which Lingamfelter said would allow Cox to govern effectively from day one. Cox’s career as a teacher, Lingamfelter said, would also serve the party well in a year in which the post-pandemic education system could be a marquee issue.

“I think a lot of Republicans are just tired of getting whupped,” Lingamfelter said.

Greeting voters in Prince William, Cuccinelli, a co-chair of Snyder’s campaign, said Republicans had “quality fields” for all three statewide races and have reason to be optimistic about November given Virginia’s history of voting against the party that just won the White House.

“The pushback is the biggest in the first year. As I should know,” Cuccinelli said, referring to his own close loss to former Gov. Terry McAuliffe in 2013 as then-President Barack Obama began his second term.

“They’re very hungry for change in Richmond,” said Wyatt, who didn’t endorse in the race for governor due to split opinions in Hanover, known as a hotbed of Tea Party-style activism.

But Wyatt occasionally bore the brunt of participants’ frustration with the long line to vote, including one man who opined out his window: “This is absolutely stupid.”

Three other gubernatorial candidates appeared on the ballot Saturday, but struggled to raise money and had a limited presence on the campaign trail: Sergio de la Peña, a former Army colonel and Department of Defense official under Trump; Peter Doran, a businessman and author; and Octavia Johnson, the former sheriff of Roanoke.

Of the three, de la Peña was the only who appeared to have broken through with an unexpectedly strong showing. “I know that Virginia has a lot of Hispanic individuals, and I think we need someone who can reach across all citizens in Virginia and acknowledge that all Republicans are not rich, White, old men,” said a voter who identified herself as Amy B., a sales representative who lives in Chesterfield, as she sat in a line of cars waiting to pick up her ballot.

Kerri Caldwell, a 60-year-old children’s entertainer from Stafford County, posed for a photo with de la Peña in Prince William while wearing a red cape and star-spangled mask. In an interview, she said she ranked him as her second choice. Her top pick was Chase.

“I think she is exactly what we need. Like a Marjorie Taylor Greene,” Caldwell said, referring to the hard-right Georgia congresswoman known for promoting the QAnon conspiracy theory. “I believe that she will be as outspoken and as strong as Marjorie Taylor Greene. And will probably be attacked. And so far they don’t seem to be able to find anything on her. Other than she berated a police officer. So I find that to be honorable.”

Phil Rogers, a retired computer engineer who was voting in Chesterfield, also listed de la Peña as his second because he liked his military background. But unlike many other delegates, he said he wasn’t worried about electability because he doubts anyone on the ballot can win.

“I don’t think any Republican stands a chance,” he said. “There’s too many opposers in Arlington, Fairfax, Virginia Beach, Norfolk. We have a lot of liberal enclaves. It’s really why I became a delegate. I can’t sit on my duff and do nothing, even if I think this is kind of a wasted effort. Well, I’m doing something.” 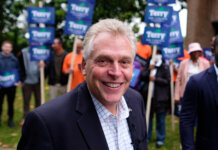 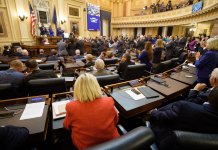 With 17 Va. House incumbents being challenged, Tuesday could be a wild primary night 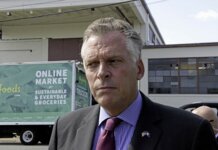 McAuliffe opposed right-to-work repeal before. Now he says he’s for it but doesn’t think it will happen.