A few years back, I visited upstate New York with a friend to celebrate the medical school graduation of another friend. We both forgot to pack lotion and decided to grab some on our way to the celebration. Unfortunately, the pump on the bottle was defective.

Sensing my frustration, my friend advised me to let him fix it once we parked. We found a space that faced an Elks Lodge, and a man parked next to us. Just as we successfully extracted lotion from the bottle, the man glanced into our car and scurried into the Elks Lodge, repeatedly glancing back at us.

“What white stuff?” asked my companion.

“The white stuff you had in your hand!”

My rage bubbled over as I yelled, “It’s LOTION!”

He paused as we gestured to the bottle of Curél in our center cup holder, but then proceeded to demand my friend exit the vehicle so he could search him. I looked at the uniformed officer — my eyes pleading with him to intervene — and he responded, “Just let him,” in a resigned manner.

“Just let him? My mother is an FBI Agent and my father works for the Office of National Drug Control Policy, and you think I’m sitting in a car doing blow!?!” I shouted loud enough for both officers to hear me.

“You work for the FBI?” the officer asked my friend.

The officers slowly backed away while apologizing for their invasiveness.

I shared this story with Julia Taylor Kennedy, my classmate from Thomas Jefferson “TJ” High School for Science and Technology in Alexandria, who is also an executive vice president of Coqual, an advisory group that conducts research on barriers to advancement for underrepresented populations in the workplace. I explained how I was still struggling to unpack and understand why I reacted that way in that moment. “You leveraged borrowed status,” she concluded. “There’s been research on it.”

Although she provided a high-level overview of what borrowed status meant and advised me that the late Dr. Katherine W. Phillips of Columbia University was the researcher, I had challenges locating a study. However, I began analyzing behaviors surrounding reactions to issues of inequity from a “borrowed status” lens. Many students dream of getting accepted into institutions like Harvard University not for specific course offerings exclusive to these schools, but because of the borrowed status Harvard will offer them as well as their families. I reflexively spat my parents’ affiliations — not to brag — but in an effort to quickly communicate the preposterousness of the officers’ theory, and to save our lives.

Although the national debate surrounding selective high schools and colleges has spun completely out of control — with a series of lawsuits being filed to maintain the status quo — I believe the root issue is the fear we all have of potentially losing borrowed status. For some, that status can be viewed as life-changing and, in some instances, life-saving.

As an alumna of the top high school in the U.S. and a Black woman who has had her talents underestimated for the majority of her life, having the ability to play the “TJ Card” has opened doors that otherwise would have remained slammed shut. However, maintaining exclusionary practices and policies at my alma mater serves no one but myself. Although the Fairfax County School Board courageously voted to eliminate the admissions test and $100 application fee that served as a significant barrier for socioeconomically disadvantaged students, there are still a number of opportunities remaining in the process for human biases to lead to inequitable outcomes for who is admitted. Autonomy for feeder counties to manage their own selection process for this public, community resource would at least ensure greater geographic diversity and increase regional awareness.

In 2019, I had the honor of meeting the late Congressman Elijah Cummings. While discussing a separate education equity issue, he told me how, “We who have benefitted from an education…it is up to us to grab a hold of an issue and run with it.” Had it not been for that conversation, I would not have engaged in this national debate and effort to increase access to educational opportunities for minoritized students. My traumatic experiences of exclusion at TJ — such as having my admittance constantly questioned and attributed to my race and teachers responding with annoyance to my questions while enthusiastically engaging my non-Black peers — made me want absolutely nothing to do with the school once I graduated.

If we as a society can worry less about trying to borrow status and do the internal work of embracing our individual excellence, we will learn that there is plenty of opportunity for us all to excel, regardless of which schools, institutions, or corporations accept us. 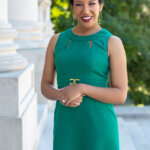 Makya Renée Little is an alumna of Thomas Jefferson High School for Science & Technology, Florida A&M University and George Mason University. She also holds a certificate in Leading Diversity, Equity, and Inclusion from Northwestern University. She lives in Northern Virginia.