The law firm hired for an investigation into how Virginia’s watchdog agency reviewed a controversial parole decision last year won’t be allowed to speak to the media without permission from Attorney General Mark Herring’s office and would have to turn over its “work product” to state lawyers upon request, according to a hiring letter released by Herring’s office.

However, the firm’s final report, which will examine how the Office of the Inspector General delved into complaints about the Virginia Parole Board’s decision to grant parole to Vincent Martin and how the IG’s office released its findings, won’t be treated as a record belonging to the attorney general.

Asked Tuesday whether the attorney general’s office plans to review or redact the report prior to its release, Herring spokeswoman Charlotte Gomer said the report will consist of the firm’s “independent findings.” She said the office only expects to be involved with handling billing for the outside investigator’s work. Gomer said the confidentiality clause barring outside investigators from speaking to the media is standard whenever the office appoints outside counsel.

The Nixon Peabody partner who signed the paperwork for the Virginia investigation is New York-based Travis Hill, who worked in the New York Attorney General’s Office before joining the firm’s government investigations and white-collar defense team, according to his online bio. Other partners on the team are Tina Sciocchetti, a former federal prosecutor, and Adam Tarosky, who formerly worked in the U.S. Department of Justice’s fraud section.

The appointment letter released by Herring’s office authorizes six Nixon Peabody staffers to work on the case, billing at rates ranging from $125 to $500 an hour. Without written approval, the firm’s costs cannot exceed the $250,000 the General Assembly budgeted for the probe.

Republicans have denounced the planned investigation as a “whitewash” because it focuses on how the IG’s office investigated just one of several complaints alleging violations of law and policy by the Parole Board and isn’t aimed at the Parole Board itself. Democrats have said the investigation will get to the bottom of one of Republicans’ main concerns: how and why a 13-page draft report with more detailed allegations of wrongdoing was edited down to six pages.

The investigation only deals with the IG’s report on how the Parole Board handled the release of Martin, who served 40 years for the murder of a Richmond police officer in 1979 and won praise as a model inmate. The decision to grant Martin parole a year ago drew a strong backlash from law enforcement and Republicans who argued the nature of his crime should’ve been disqualifying.

The final report found the Parole Board violated its own policies and state law by not sending a timely notification of Martin’s pending parole to the Richmond prosecutor’s office and not doing enough to allow the family of the slain officer to offer meaningful input on the board’s decision. The Northam administration has disputed those findings and accused the IG’s office of being biased against Martin.

The governor’s office has pledged to make the final report public. The approval for the third-party investigation stipulates that the report must go to Gov. Ralph Northam and General Assembly leaders from both parties in both chambers. The attorney general’s office also helped vet the information gathered by investigators in the IG’s office, a process that may have determined what information in the draft report was left out of the final version.

Republicans contend the attorney general’s involvement presents a conflict of interest, because his lawyers were advising both the IG’s office and the Parole Board on how to handle the Martin investigation. They’ve called for a General Assembly-led investigation with a stronger focus on the Parole Board, but Democrats have resisted a probe led by politicians in a high-stakes election year.

The legal advice given during the Martin investigation seemed to be a point of frustration for some in Gov. Ralph Northam’s administration. During a meeting last year between administration officials and Inspector General Michael Westfall to discuss the Martin findings, Northam Chief of Staff suggested the conversation might have benefited from the presence of the attorneys who had been advising both the Parole Board and the watchdog agency investigating the Parole Board.

“We need both AG reps because I think we’ve gotten diametrically different feedback from that building,” Mercer said, according to a recording of the meeting.

The attorney general’s office has been largely silent on its role in the preparation of the Martin report, but Gomer said the office will cooperate with Nixon Peabody “to the fullest extent under the law.” 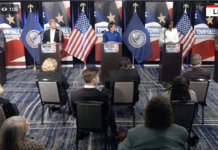 How hard a bargain did Virginia drive on Amazon? Secrecy pledge...