When she was sworn in as the first woman to serve as speaker of the Virginia House of Delegates, Eileen Filler-Corn said she was struck by the diversity of the new Democratic majority looking back at her.

A year later, she was standing in a mostly empty room, speaking to “squares on a computer” as the oldest continuous legislative body in the Western Hemisphere tried lawmaking via Zoom.

It’s not yet clear when the House will return to normal. But after two years in power, Filler-Corn says she’s confident Virginia voters still want Democrats in charge.

“We heard the issues that were important to Virginians,” Filler-Corn said in a recent interview with The Virginia Mercury. “We campaigned saying we were going to do X, Y and Z. We were very upfront about it. Very bold. And there is no doubt about it that we followed through.”

This year, Virginia Democrats are trying to extend their winning streak in statewide elections, looking to keep the offices of governor, lieutenant governor and attorney general, all of which the party has held since 2014. But the era of unified Democratic control will also be at stake in the House contests, with Democrats trying to defend the 21 House seats they gained since former President Donald Trump took office and keep a majority that’s currently a comfortable 55 of 100 seats.

Republicans are hoping that with Trump now out of the spotlight, the shifting political environment could give them a lift in some of the suburban areas that turned sharply against them in 2017 and 2019, erasing what had been a 66-seat GOP majority just four years ago. Though all House seats are on the ballot this year, the Senate, where Democrats have a 21-19 majority, won’t be up for election until 2023.

Even though Trump’s no longer in the White House, Filler-Corn said, he’s “alive and well in the Virginia Republican party.”

There have been few major areas of bipartisan compromise since Republicans were relegated to the minority in the General Assembly. The fact that most Republicans couldn’t get behind broadly popular proposals like raising the minimum wage, passing anti-discrimination legislation and legalizing marijuana, Filler-Corn said, shows they’re “out of touch.”

“They’re just stuck,” she said. “They’re stuck in this place and their party didn’t move. Their party hasn’t evolved. But Virginia has evolved.”

Republicans are campaigning heavily against “one-party rule,” with House GOP leaders arguing Democrats were slow to move on reopening schools due to teacher opposition and have overstepped in their push to reform policing and the criminal justice system. House Republicans have touted their 2021 slate of candidates as “the most diverse we’ve ever fielded,” one that includes at least 19 women and at least one candidate in 90 House districts.

In a statement, House Minority Leader Todd Gilbert, R-Shenandoah, said the Democratic majority has been most responsive to “the teachers unions who have fought tooth and nail to keep our schools closed.”

“When they weren’t busy ignoring the plight of our school children, House Democrats spent months making life easier for criminals, more difficult for police, all while ignoring blatant corruption at the Parole Board,” Gilbert said. “November will be a referendum on one-party rule in Virginia. That’s why we’re confident voters will return a Republican majority to control this fall.”

Though Democratic General Assembly leaders have been slow to respond to the yearlong controversy over the Parole Board, which the state inspector general’s office found violated its own policies and state law in several parole cases involving people convicted of violent, high-profile crimes, the legislature just approved funding for an outside investigation dealing with the issue. However, that investigation will mainly focus on how the Office of the Inspector General conducted its probe of one particular Parole Board case and will not provide a comprehensive look at potential wrongdoing by the Parole Board itself.

Filler-Corn said she’s waiting to see what that investigation turns up when the legislature receives a report on it in mid-June.

“We will have an opportunity at that point to see what comes out from the professionals and to consider next steps” Filler-Corn said. “This should not be politicized. We need to take it seriously.”

Asked whether she feels Democrats have more to do on police reform in light of the viral controversy over a traffic stop in the town of Windsor involving a Black and Latino driver, Filler-Corn noted that the House passed a bill to roll back the qualified immunity doctrine that can shield police officers from civil rights lawsuits. That bill failed in the Senate.

Filler-Corn said she thinks all institutions could do more to focus on accountability and combating systemic racism.

“Yes, it’s law enforcement,” Filler-Corn said. “It’s also health. Finance. Education. All aspects of our society. And I think everybody needs to be held accountable.”

She said she believes one of her caucus’s greatest strengths is the diversity of its members’ experiences and perspectives. That doesn’t just carry symbolic weight, she said, but translates to better policy.

“We had communities that never had a voice before,” she said.

The elevation of women in particular has been important, she said, because women “think differently” and are “arguably more communicative and collaborative.”

With some Democrats hoping to make history by electing a Black woman as governor this year, Filler-Corn has endorsed former Gov. Terry McAuliffe, backing the frontrunner instead of Sen. Jennifer McClellan, D-Richmond, and former delegate Jennifer Carroll Foy.

Filler-Corn called Carroll Foy and McClellan “very bright, capable women” and said she considers them friends. But, she said, she goes “way back” with McAuliffe.

“We all saw what he was able to accomplish without having a Democratic-controlled legislature,” Filler-Corn said. “He’s relentless. He’s hard-working. He’s never afraid to stand up for the issues and the values that are important to all of us. And he has the record to prove it.”

Another gubernatorial hopeful from within Filler-Corn’s caucus, Del. Lee Carter, D-Manassas, has clashed openly with party leaders he accuses of stifling discussion of progressive policies like repealing the state’s right-to-work law that impedes union organization. Lt. Gov Justin Fairfax is also running for governor, but he hasn’t received any major endorsements as he continues to try to move past the uninvestigated sexual assault allegations leveled against him in 2019, allegations he denies.

In addition to the campaign season, the House could be back in special session twice more this year, once to figure out how to spend billions in federal aid money and again in the fall for an up-or-down vote on maps drawn by the new Virginia Redistricting Commission.

Filler-Corn said it’s too early to say if the House might return to meeting in person by then.

“I’m definitely ready to transition back to in-person as long as things can be done safely,” she said. “That’s what I think most of us are waiting for.”

The fact that Democrats have ushered in sweeping policy changes while responding to the crises of the pandemic, Filler-Corn said, only strengthens the record House Democrats will be running on this year.

“I think voters will agree come November that we’ve governed responsibly,” she said. 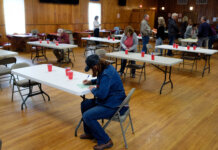 After two sessions and with elections looming, Filler-Corn says Democrats have delivered while GOP is ‘stuck’