A proposal to make it illegal for Virginia politicians to use campaign funds to enrich themselves failed in the state Senate Tuesday, the latest sign of the legislature’s continuing wariness on campaign finance reform.

Several senators said they agreed with the proposal generally, but insisted policymakers should take more time to study it before imposing new rules on candidates running in Virginia’s wide-open fundraising system.

“The critical component here is to actually get it right,” said Sen. Jill Vogel, R-Fauquier, an election lawyer who noted that she sponsored a similar bill in the past and wants it to be wrapped into an upcoming study on comprehensive campaign finance reform.

Under Virginia’s existing laws, political candidates are free to take as much money as they can get from any willing individual donor or corporation. But they don’t have to use it for their campaign.

Because there’s no law against using campaign cash for personal expenses (except when the campaign is officially over), candidates only run the risk of public scorn if they dip into their campaign account to pay their own bills or buy things that have nothing to do with winning votes.

For years, legislators have tried to pass an official ban, arguing it would restore trust in the democratic system and bring Virginia more in line with federal campaign rules and policies in most other states. But some senators seemed to conclude the line between personal and campaign spending was too blurry, one that could trip up well-meaning lawmakers for innocuous behavior like eating campaign-funded pizza or stopping to get groceries while driving home on campaign-funded gas.

In a committee hearing, Sen. Lionel Spruill, D-Chesapeake, asked how the proposed ban would factor into a situation where a candidate used campaign money to buy pizzas for volunteers after a day of door-knocking.

Del. Marcus Simon, D-Fairfax, the bill’s patron, explained the ban would only apply to expenses that would exist “irrespective” of political activity.

“The pizza is there as a nice thing to do for your folks,” Simon said. “I think you can join them for a slice of pizza without running afoul of this particular statute.”

Despite a late-session effort to change the bill to ease those concerns, the Senate took a voice vote to send the bill back to committee, again killing what seemed to be the least controversial of the campaign finance proposals that routinely fail each year.

The bill, which included a specific carveout for child-care costs that advocates said would encourage more young mothers to run for office, had passed the House of Delegates 100-0.

After Tuesday’s Senate vote, Simon said he was “obviously disappointed” the Senate “couldn’t find a way to live under the same rules as the federal government and at least 47 other states.”

Though it remains legal in Virginia, federal candidates who spend campaign money on themselves can face serious legal consequences. In 2020, U.S. Rep. Duncan Hunter, R-Calif, was sentenced to 11 months in prison for taking more than $150,000 from his campaign and using it for vacations and private-school tuition. More recently, Rep. Lauren Boebert, R-Colo., came under scrutiny for reimbursing herself more than $22,000 for campaign-related mileage from her 2020 bid, which translated to more than 38,700 miles driven.

“It doesn’t come up much in Virginia because frankly there’s no reason for anybody to investigate or look into it,” Simon said. “Because it’s not illegal.”

State lawmakers have to disclose their campaign spending, but minimal supporting documentation makes it difficult to track the exact circumstances of each expenditure. For example, a campaign finance report might list a $1,600 purchase at Best Buy or a $400 purchase at Wegman’s, but campaign aren’t required to offer detailed explanations of what was bought and why.

Simon’s bill would have directed the State Board of Elections to craft more detailed rules for how the ban would work. The penalty for violations, he said, would be a relatively small civil fine similar to the ones imposed for other campaign finance reporting errors.

Skeptics questioned whether state election officials were equipped to handle all the complaints that could come under the proposed law and raised concerns about a seeming lack of consequences for false or frivolous complaints.

When he ran for office in 2017, Gov. Ralph Northam called for banning corporate donations and capping most contributions at $10,000, policy goals likely to go unrealized as he nears the end of his term.

But legislators have acknowledged the state’s campaign finance system is worth taking a look at with an eye toward future legislation.

This year, lawmakers voted to create a joint subcommittee that will study the prospect of comprehensive campaign finance reform and report back by Nov. 1.

“I think like most of us here I ran for office because I wanted to work on policy and make our communities better. Not to spend hours on the phone raising money,” Del. David Bulova, D-Fairfax, said as he presented the study resolution in the House.

The study resolution, which has already passed the House and Senate, noted the increasingly high cost of running for office in Virginia, with competitive House races running into the millions of dollars and total spending in the 2017 governor’s race topping $65 million.

In discussions of campaign finance reform over the years, some legislators have suggested Virginia’s reporting-based system, where politicians are mostly free to accept money with no limits as long as they reveal where they got it, may be preferable because it favors disclosure versus dark-money efforts from PACs of unknown origin.

Sen. John Edwards, D-Roanoke, told a Senate committee he had studied the issue for a law review article he published in 1969 and concluded there are constitutional issues with limiting contributions.

“The only thing that really works is reporting,” he said.

The subcommittee’s proposals could presumably be considered in the 2022 session.

“This study doesn’t mean we have to do anything,” Sen. Dave Marsden, D-Alexandria, said at the committee hearing. “It just means we have to take a look at what’s going on and see if somebody has created a better system.”

As the study resolution advanced through the Senate, Sen. David Suetterlein, R-Salem, suggested there was a disconnect between some Democrats’ professed support for campaign finance reform and the legislature’s unhurried approach to the topic.

“We’re in the second year of united government,” Suetterlein said. “I heard a lot previously for more than a decade about the need for campaign finance reform. I don’t understand why it’s only going to start a study now.” 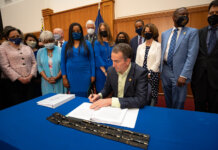 Virginia legalized it, but people in prison on marijuana charges will stay there under new law

Trying to keep people away from the ballot box isn’t a...