After rejecting proposals to hold a state-run primary, a party-run canvass and an unassembled convention to choose their nominees for statewide office, Virginia Republicans settled Tuesday evening on a plan to hold a traditional convention in an untraditional location: parking lots scattered around Liberty University in Lynchburg.

“Liberty University has over 25,000 parking spots they’re willing to let us utilize for a one-location, drive-in convention,” explained GOP Central Committee member Willie Deutsch. “It is really now the last option on the table.”

The convention is set for May 8.

Members of the committee have been bitterly divided over how to select their nominees for governor, lieutenant governor and attorney general — a process that has stretched over multiple meetings and months.

A majority of members have favored a convention since the beginning, but they were unable to muster the super-majority of votes necessary to change the party plan to allow the event to take place in a COVID-19-friendly, remote format as the remainder of members continued to push for a state-run primary.

By the time the central committee met on Tuesday evening, the deadline to ask the state to hold primary on their behalf had passed and the pro-primary camp proposed a party-run canvass as an alternative.

Unlike a state-run primary, the method chosen by Democrats for 2021, a canvass, also known as a firehouse primary, would have allowed the GOP to set up and run its own voting sites around the state. And unlike a convention, it would have allowed anyone to participate without being selected as a delegate by their local GOP unit.

Supporters of a canvass, which included three former GOP governors, argued it would allow for broader participation than a convention and avoid potentially running afoul of pandemic restrictions on large gatherings.

“For today, we respectfully implore you, for those candidates who might wish to follow in our footsteps as statewide elected officials, to end the stalemate, select a canvass and unite to win in November,” wrote former Govs. Bob McDonnell, George Allen and Jim Gilmore in their letter to the committee.

The pro-convention side argued the party needs to maintain tighter control over who participates in its nomination contest. They also favored convention rules that allow for successive rounds of voting and require the winning nominees to muster at least a 50 percent majority to win — a threshold they say is critical in a crowded field to avoid nominating an unpopular candidate who wins only a narrow a plurality of the vote.

Convention supporters also contended the party doesn’t have the infrastructure necessary to set up polling locations around the state.

They appeared to agree that the decision to meet in parking lots at Liberty is less than ideal, but said they were left no choice after primary supporters refused to agree to an unassembled convention, in which drive-through voting would be held in each of the state’s 11 congressional districts.

Technological plans for the event are still being worked out, but party leaders said they expected to rely on radio broadcasts to deliver speeches. It was unclear how voting would take place.

Some members questioned how convention delegates who don’t own cars would participate. (One member noted most people who live on Tangier Island, a tiny GOP stronghold in the Chesapeake Bay, only own boats and wondered if docks would be available.)

There were also questions about whether spreading convention delegates out through multiple parking garages and surface lots across a college campus would meet the party’s definition of an assembled convention.

On Tuesday evening, no answers were forthcoming. “I have no comment on parking lots and parking garages that I can coherently share tonight,” said the party’s general counsel, Chris Marston. 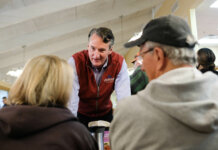