The first confirmed case of the United Kingdom coronavirus variant has been discovered in Virginia, according to a Monday announcement by the state’s Division of Consolidated Laboratory Services.

DCLS spokeswoman Dena Potter said the case was reported in an adult resident of Northern Virginia with no reported travel history. The agency, which oversees the state laboratory in Richmond, has been sequencing COVID-19 samples since the early months of the pandemic. That’s allowed the lab to detect 68 lineages of the virus since Virginia’s first confirmed case in March.

DCLS Director Dr. Denise Toney said the U.K. variant is one of the most concerning, globally, due to its higher rates of transmissibility and evidence that it infects children more easily. Also known as the B.1.1.7 variant, nearly 200 cases have been detected in 23 states as of Jan. 22, according to a news release from the Virginia Department of Health and Department of General Services.

“Viruses change all the time, and we expect to see new strains as disease spreads,” state Health Commissioner Dr. Norman Oliver said in a statement. “We know this variant strain spreads more quickly between people than other strains currently circulating in our communities, but we still have more to learn about whether it causes more severe illness. As our state public health officials closely monitor the emergence of the B.1.1.7 variant in our commonwealth, it is important that all Virginians continue following mitigation measures.”

Preliminary evidence from the U.K.’s New and Emerging Respiratory Virus Threats Advisory Group suggests that the variant could increase the death rate from the virus, though it’s still unclear why that may be occurring. Other studies have found that it’s between 50 to 70 percent more contagious than other forms of the virus.

While its significantly higher transmissibility has caused global concern, both Pfizer and Moderna say their vaccines — currently the only two with emergency use authorization in the United States — are protective against the U.K. variant. The U.S. Centers of Disease Control and Prevention warned last week that it could become the dominant version of the virus in the U.S. by March.

“We’re actively monitoring all possible variants,” Toney said in an interview earlier this month. “But I do think the fact that this variant has demonstrated increased transmissibility — that’s one of the reasons it’s gleaned the greatest focus and attention in trying to look for it.”

Detecting a variant of COVID-19 requires paying close attention to small changes in the virus’ RNA. Toney said there are a series of 17 “SNPs,” or single nucleotide polymorphisms, that have been identified in the UK variant — genetic variations that distinguish it from other lineages.

“In order to be designated as the B.1.1.7 variant, it doesn’t have to have all of the mutations, but it does need to have more than four,” she said. The state lab has been screening samples that could potentially contain the variant through its PCR testing process, which targets three different regions of the COVID-19 virus.

One of those regions is found in the spike protein, a section of the virus that helps it bind to host cells. The U.K. variant has a double deletion along that protein, which Toney said would come back as a testing failure in the lab.

“In that case, instead of having all three targets come back positive, only two of the three are positive,” she said. “Which would still tell us it’s one of the SARS-CoV-2 viruses. But the fact that the S-gene did not amplify gives us a way to think it could be the B.1.1.7  variant.”

In that case, the sample would be prioritized for genetic sequencing to determine that it really is the variant — a labor-intensive process that Toney said can take between three and four days. The state lab doesn’t sequence every sample of COVID-19 that comes through its doors, but its PCR testing process gives it a way to screen likely candidates.

“There are other tests out there that don’t target the spike gene,” she said. “So, if you had a test that only targeted a certain gene, you’d have no way of knowing if you could have the mutation.”

DCLS currently performs genetic sequencing on roughly 100 samples a week. Toney said the lab takes a targeted approach, not only sequencing samples identified as potential high-risk variants, but those from unique cases of the disease.

“Maybe it’s a patient who has unique clinical symptoms, or maybe you’re looking at a community cluster where there appears to be increased transmissibility,” she said. The lab also sequences at least two or three samples from every new outbreak and at least one percent of positive samples from independent commercial labs such as Quest and LabCorp.

“By doing this targeted sequencing, we can get the greatest amount of data in the quickest amount of time,” Toney said. DCLS also asks hospital labs to forward any samples with deletions or mutations that could be indicative of the B.1.1.7 or other high-risk variants.

Genetic sequencing has also allowed the state lab to offer greater insight to VDH epidemiologists as they analyze the spread of COVID-19. Over the past month, there have been 17 lineages of the virus circulating across Virginia (“as lineages propagate and die, some will continue to circulate, new ones will arise, and old ones will disappear,” Potter added in an email). In many cases, sequencing can help determine whether outbreaks are caused by multiple exposures in a single setting or whether they emerged from a single spreader.

“If all the samples were the same, it would indicate there was one person who introduced it and exposed the other people,” Toney said. To date, DCLS has sequenced about 170 outbreaks and found that 38 of them had strong evidence of multiple viral introductions.

Oliver said in a statement that health officials would “closely monitor” the emergence of the B.1.1.7 variant in Virginia. The state’s daily number of new cases — 6,172 as of Monday — has somewhat stabilized over the last several days after a post-holiday surge that brought daily increases closer to 10,000. But hospitals are still reporting record numbers of COVID-19 admissions — which they say is straining the same workforce needed to widely vaccinate Virginians against the disease. 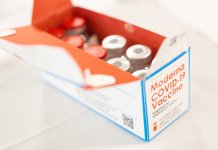 I’m young, healthy and got vaccinated. Here’s why.