Men walk down Main Street with firearms during a pro-gun rally in Richmond on Monday, Jan. 18, 2021. A sign warns that guns are banned at demonstrations. (Ned Oliver/Virginia Mercury)

As each new armed group arrived in downtown Richmond Monday, they were greeted by a swarm of cameras and interviewers asking why they had come out to stand near the Capitol with their guns.

“I’m just trying to get on TV,” said one young man wearing camouflage, drawing laughs from his group of about five armed associates. “Joke’s on you guys.”

One year after more than 20,000 gun enthusiasts swarmed Richmond to protest new gun laws, Monday’s sequel was smaller and stranger.

After being denied a permit to rally on the Capitol grounds, the pro-gun Virginia Citizens Defense League asked its supporters to participate in a vehicular caravan through the city. But several disparate groups, including members of the anti-government Boogaloo movement, the Proud Boys and the Black Panthers, demonstrated on foot around the locked-down Capitol building.

Many were carrying firearms. But there appeared to be no confrontations with police, despite the passage of a new city law last year meant to allow authorities to ban guns at political demonstrations and other public events. 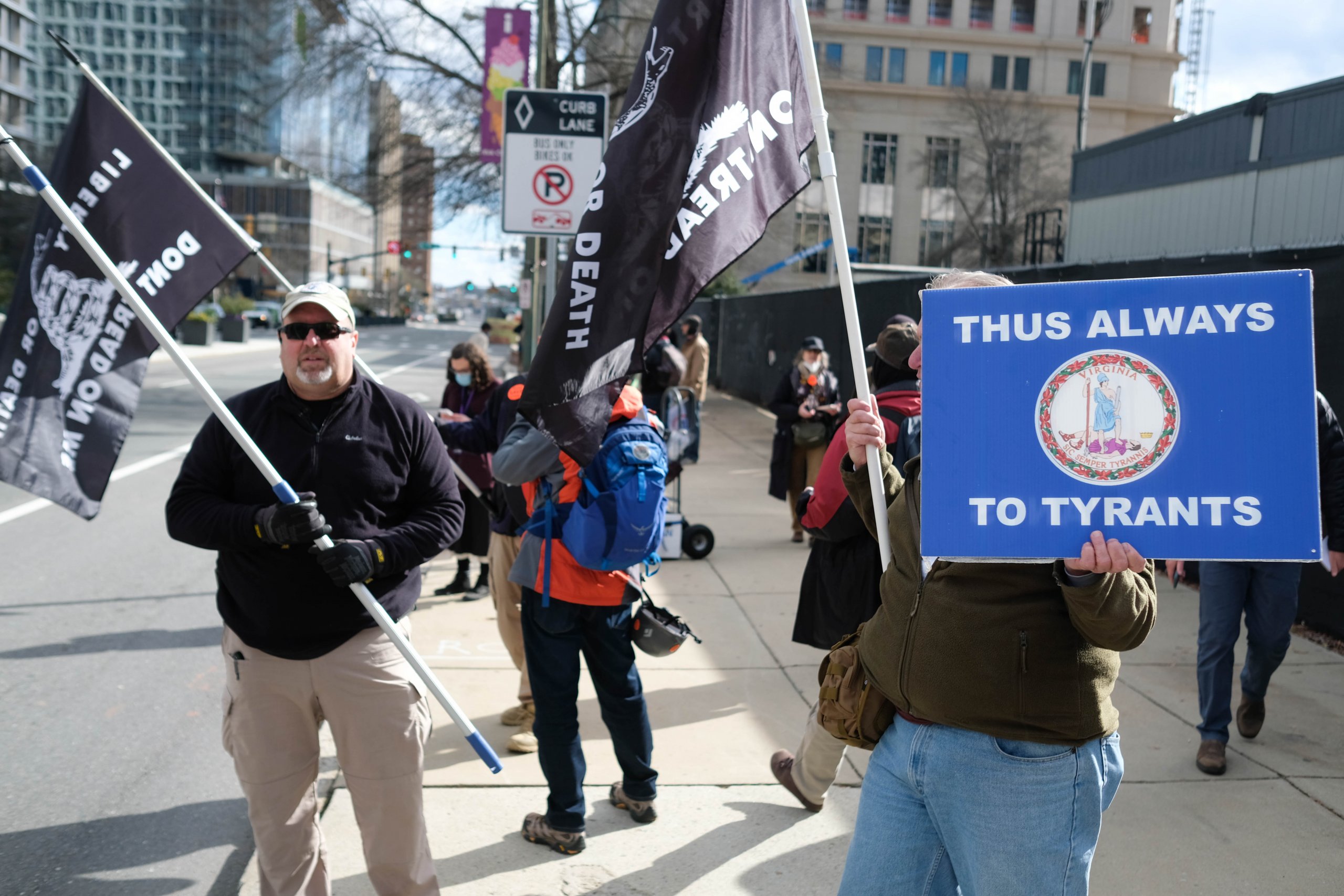 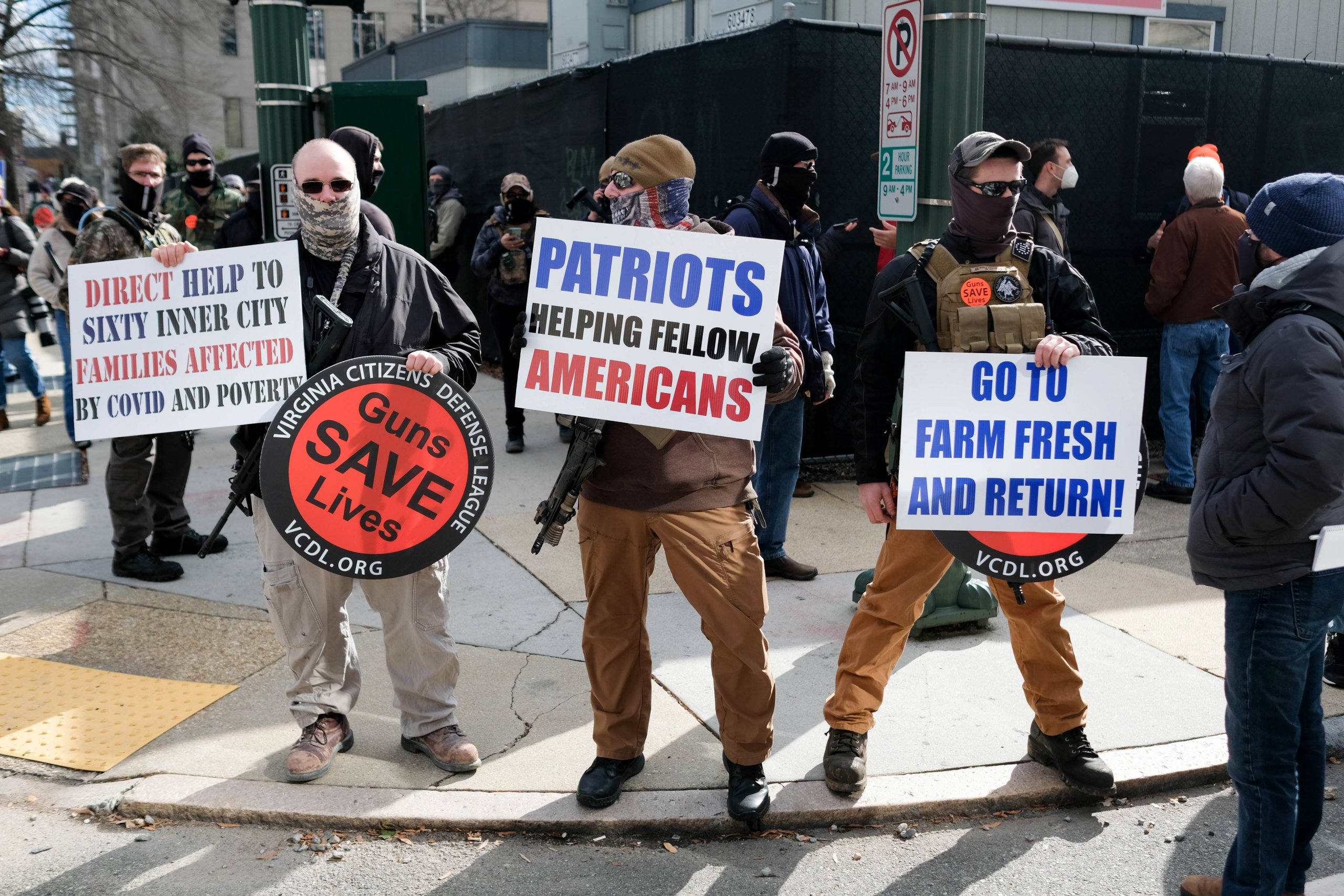 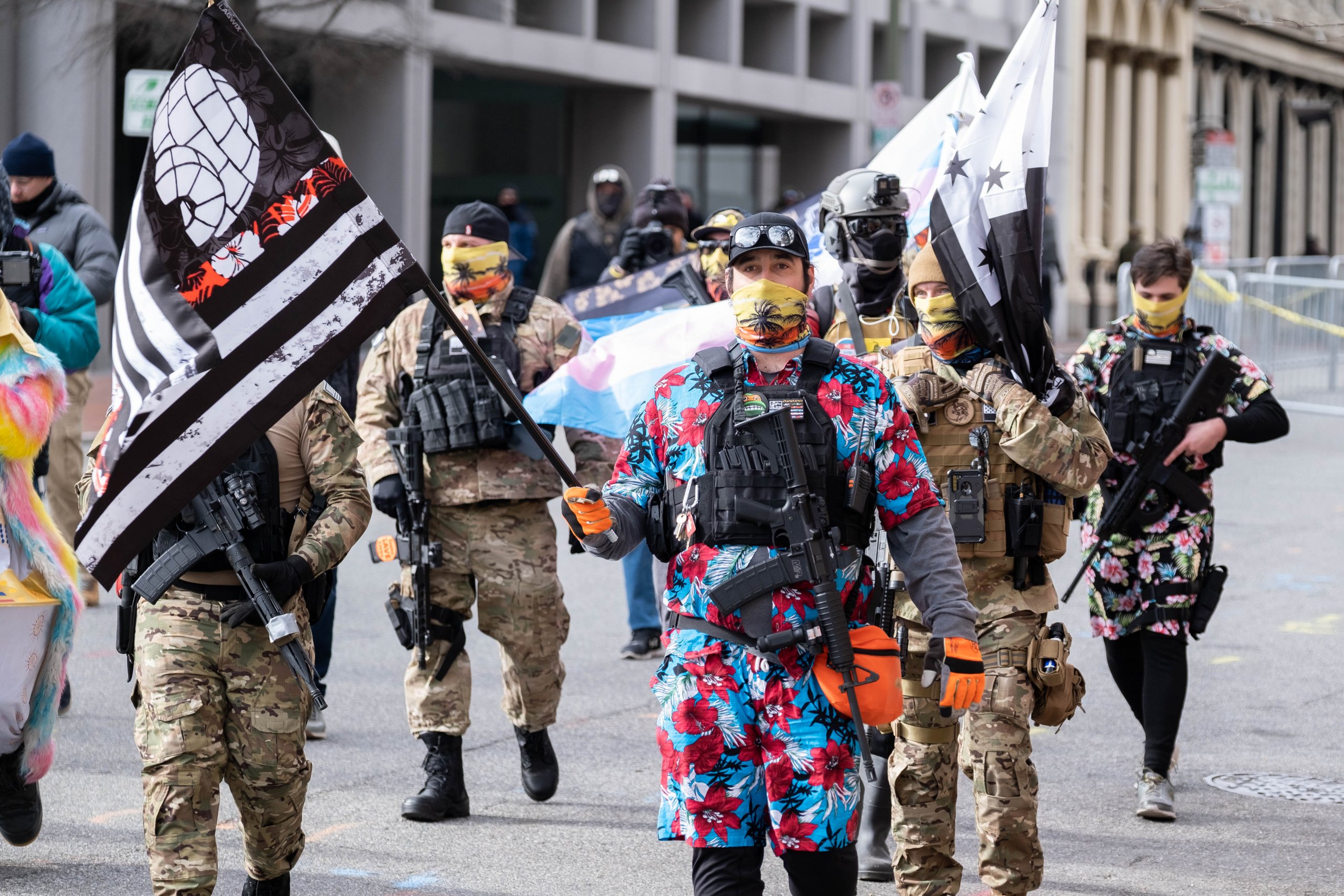 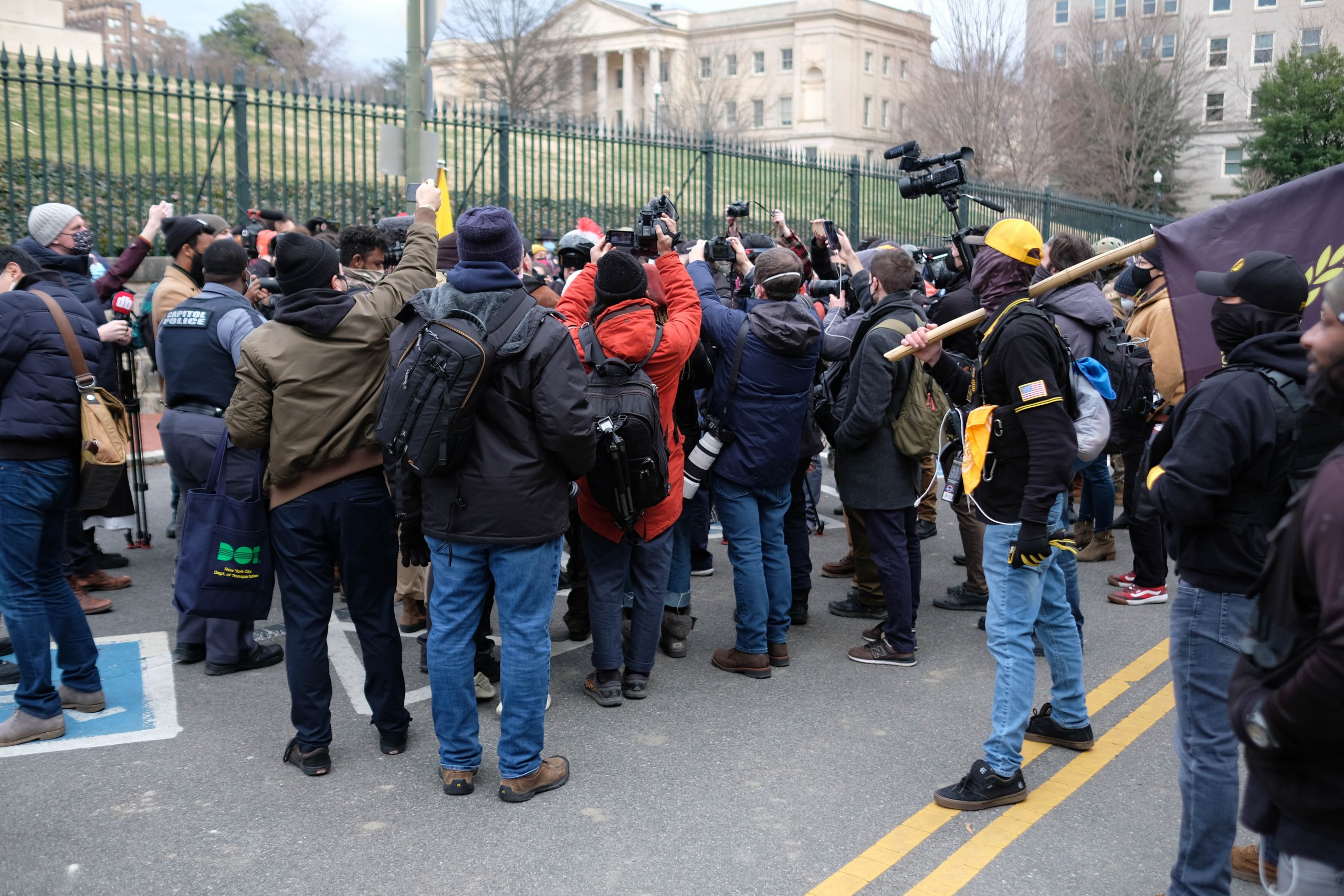 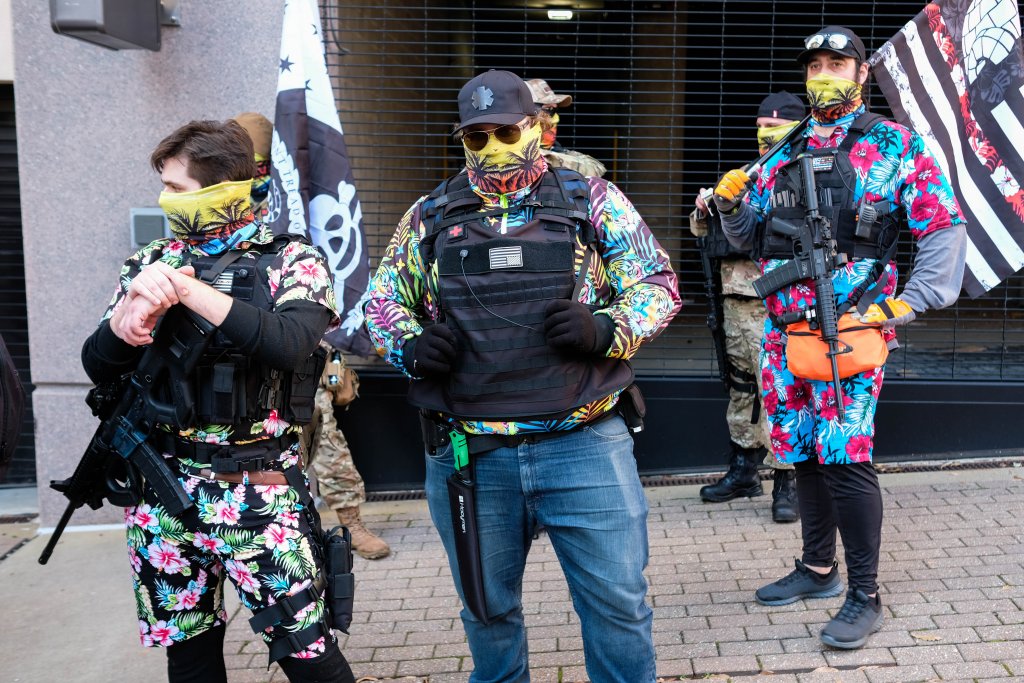 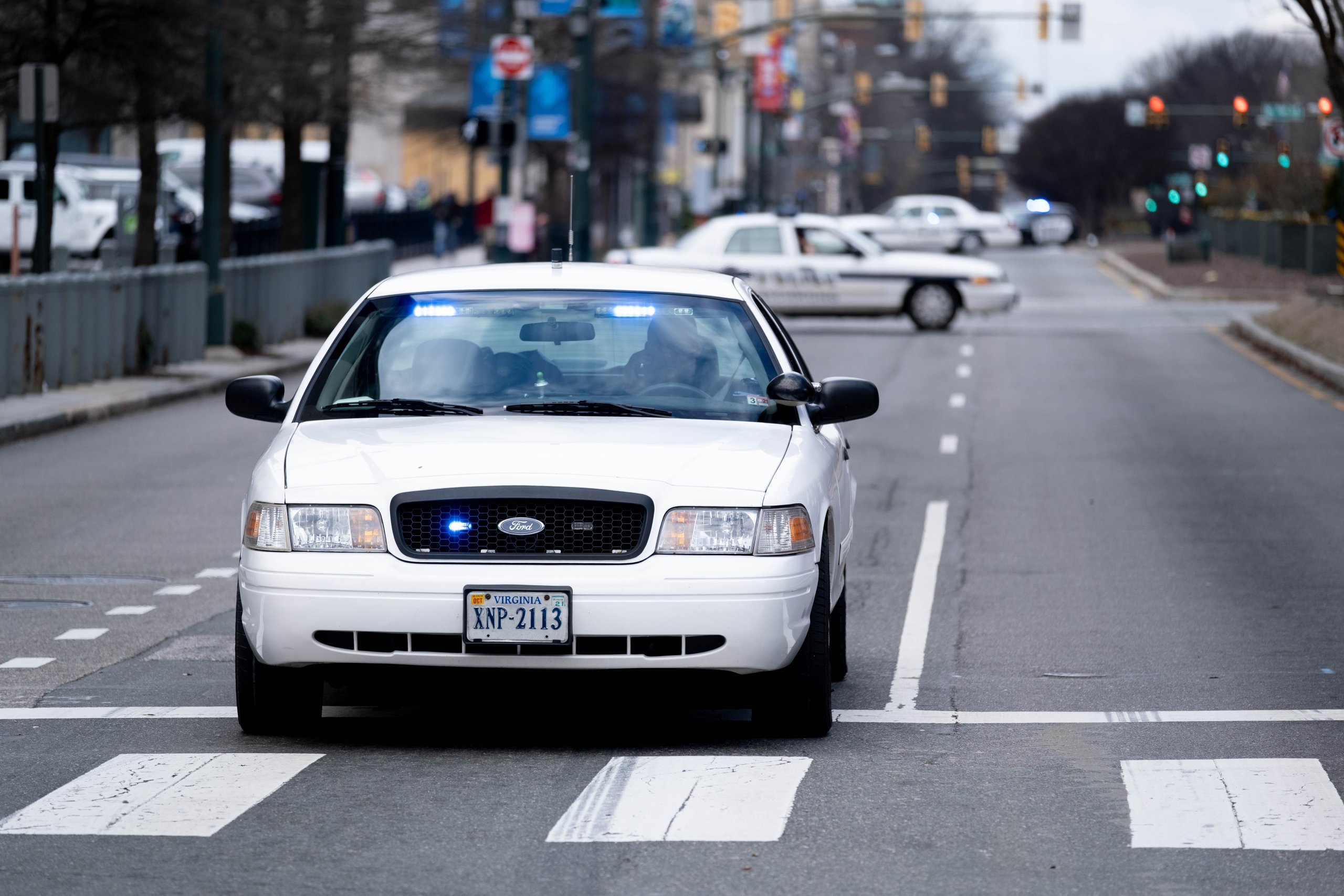 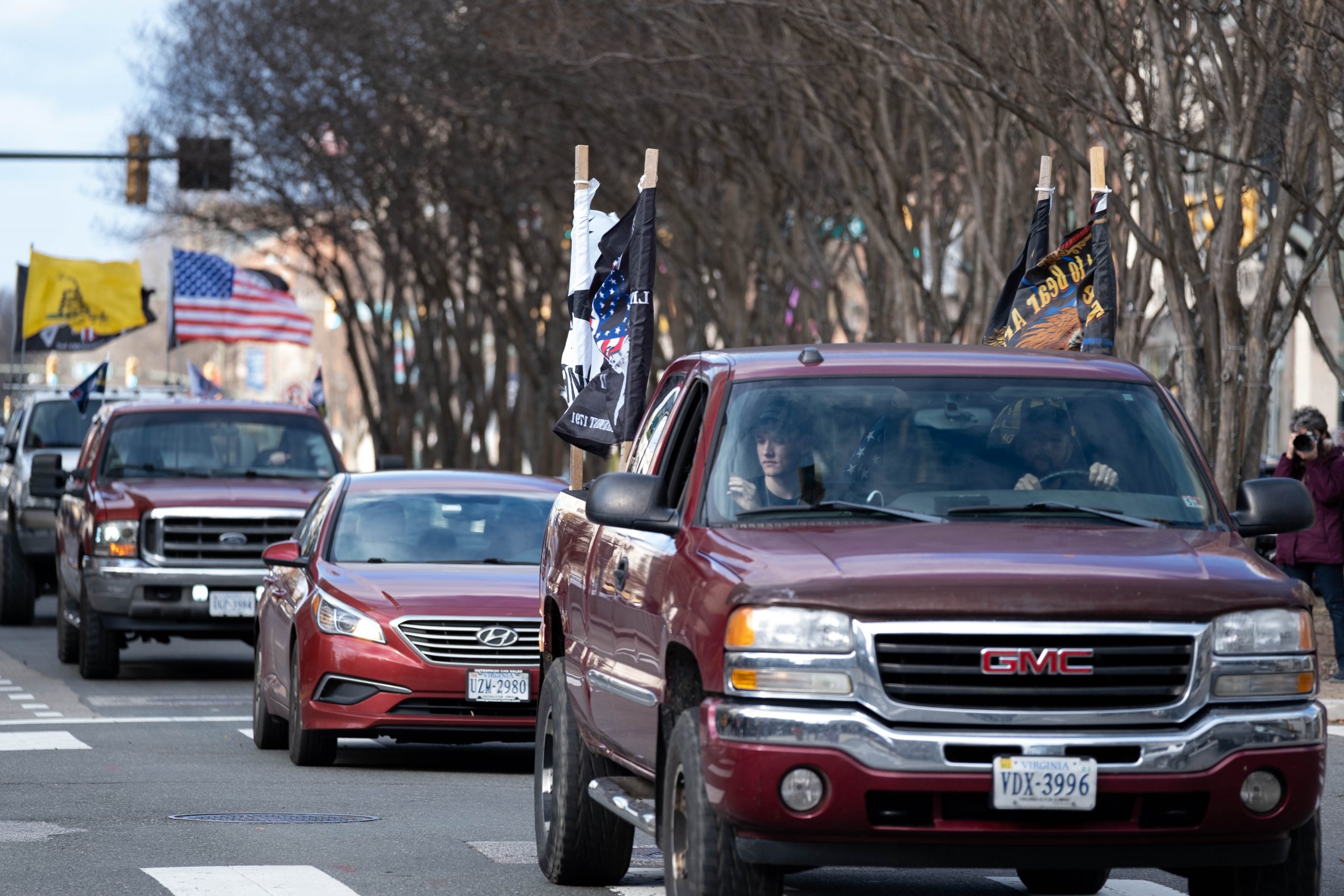 Vehicles decked with flags drive down Broad Street during a pro-gun rally in Richmond on Monday, Jan. 18, 2021. (Ned Oliver/Virginia Mercury) 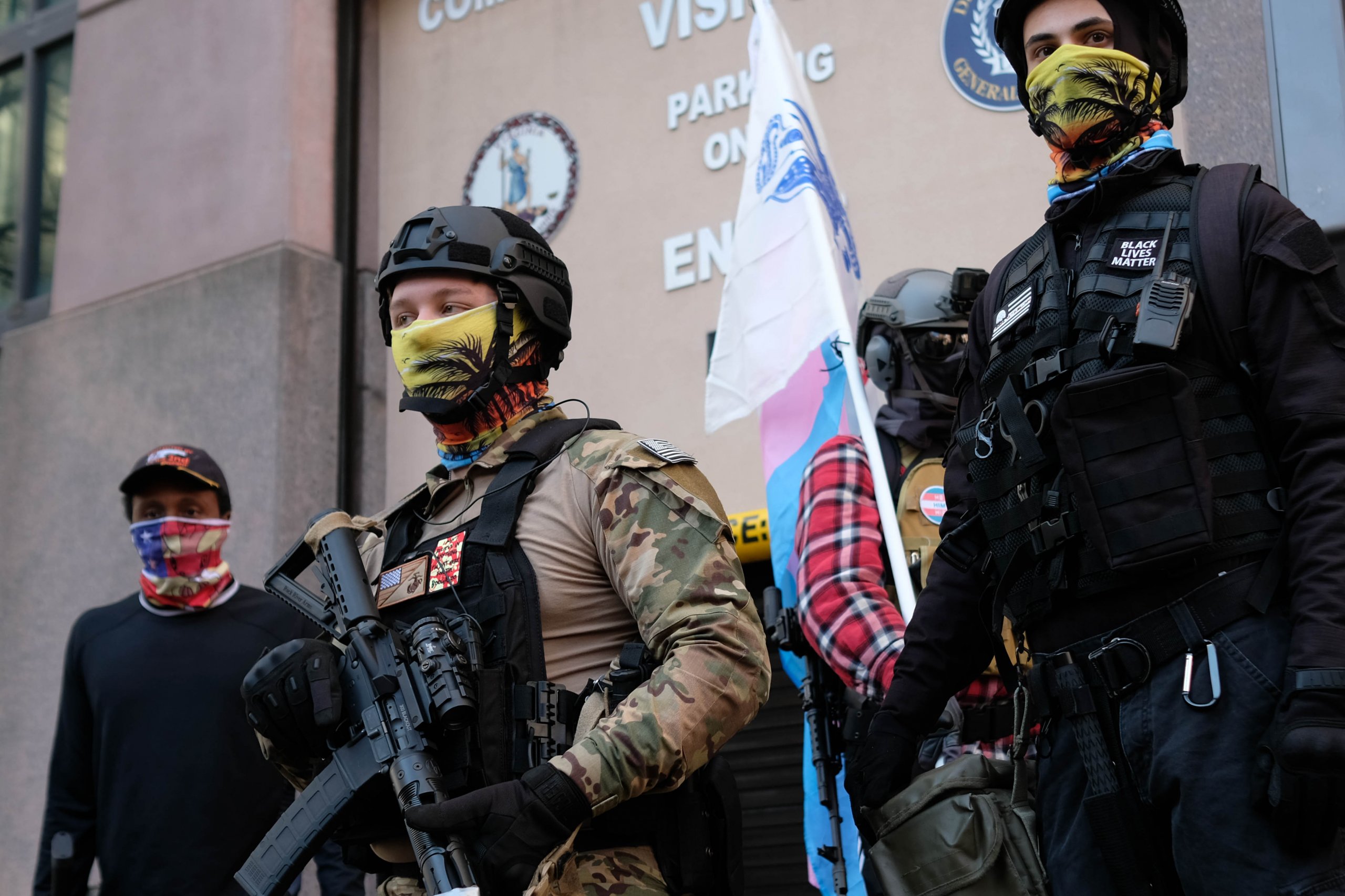 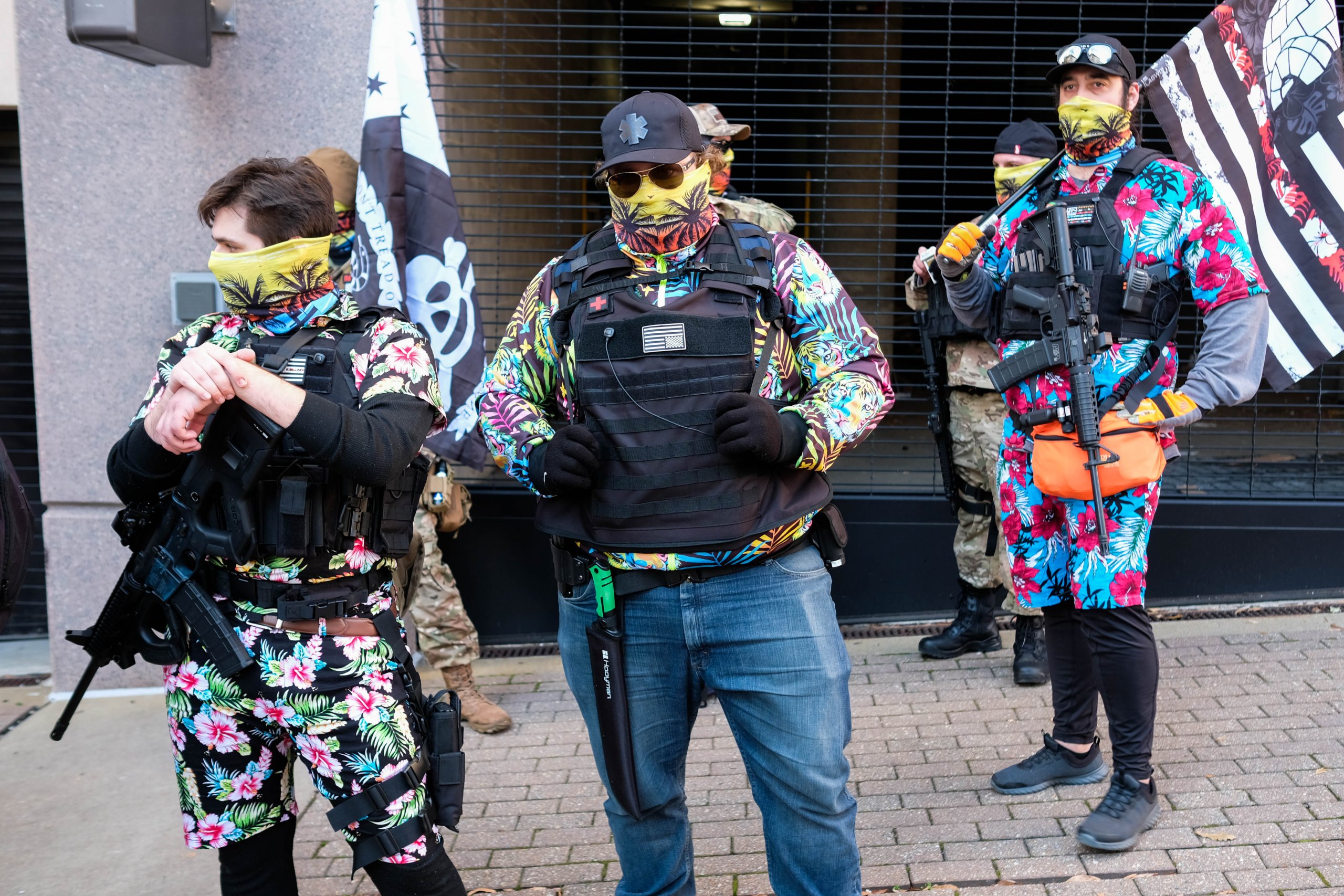 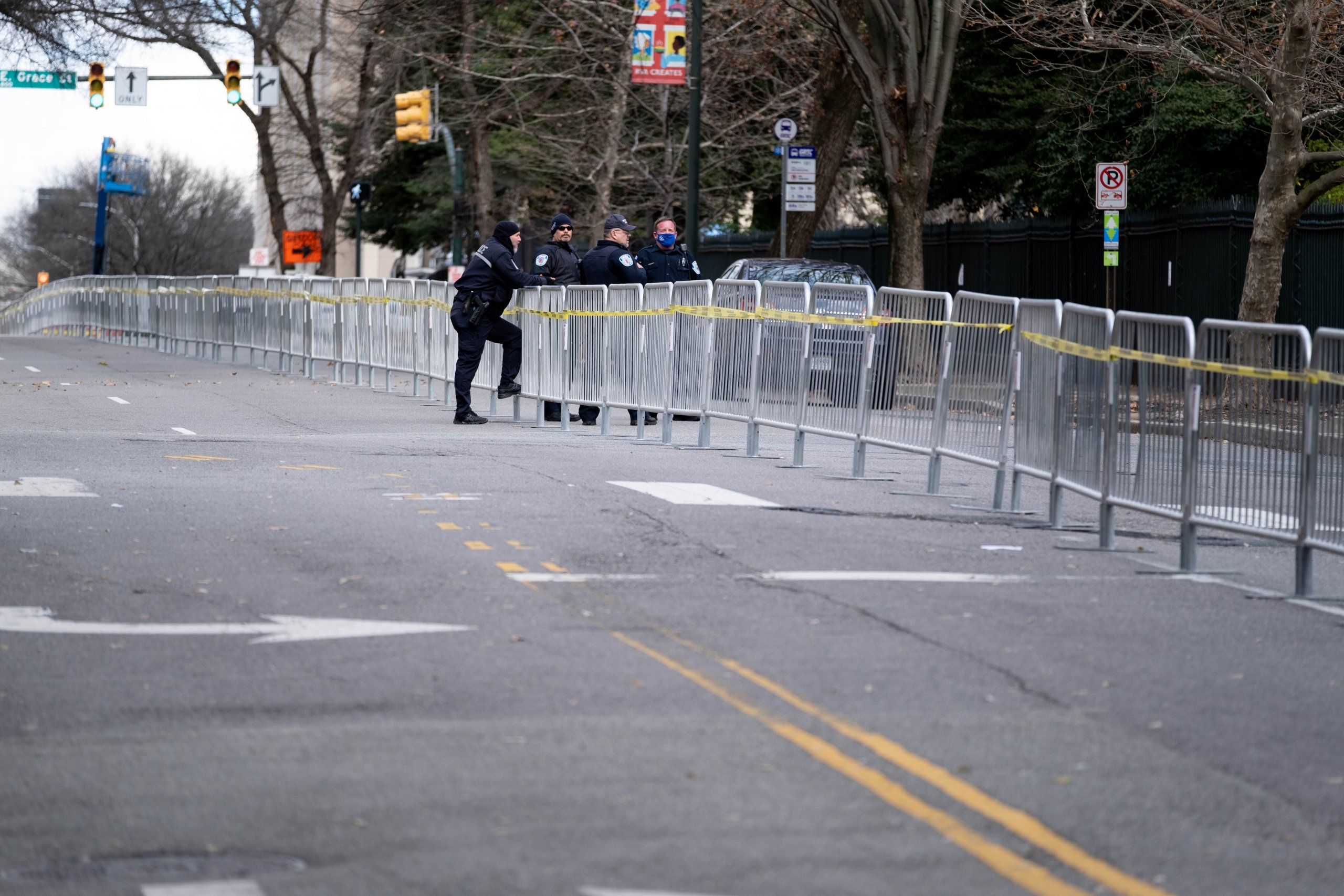 Capitol Square was blocked off with thousands of feet of fencing during a lightly attended pro-gun rally in Richmond on Monday, Jan. 18, 2021. (Ned Oliver/Virginia Mercury) 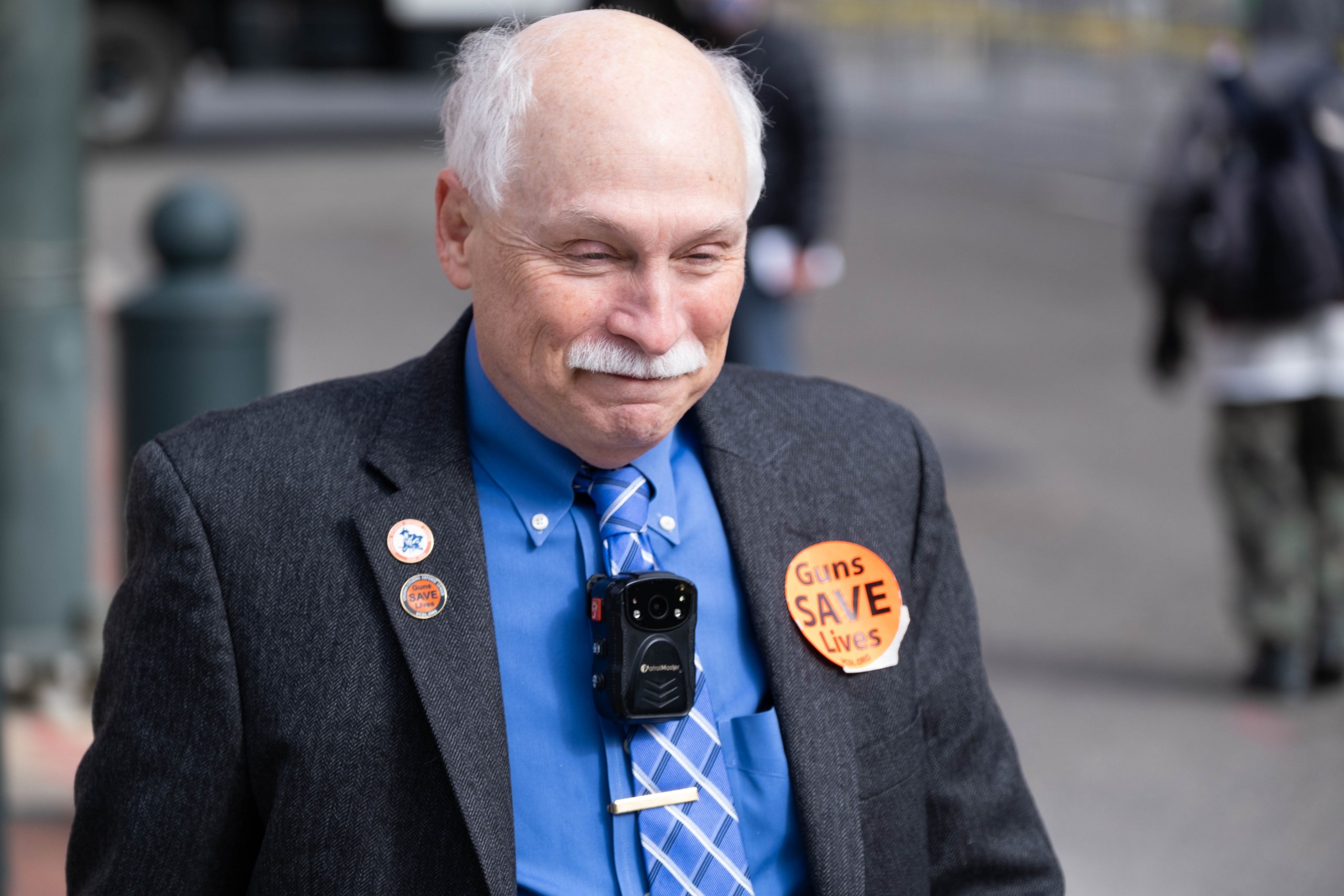 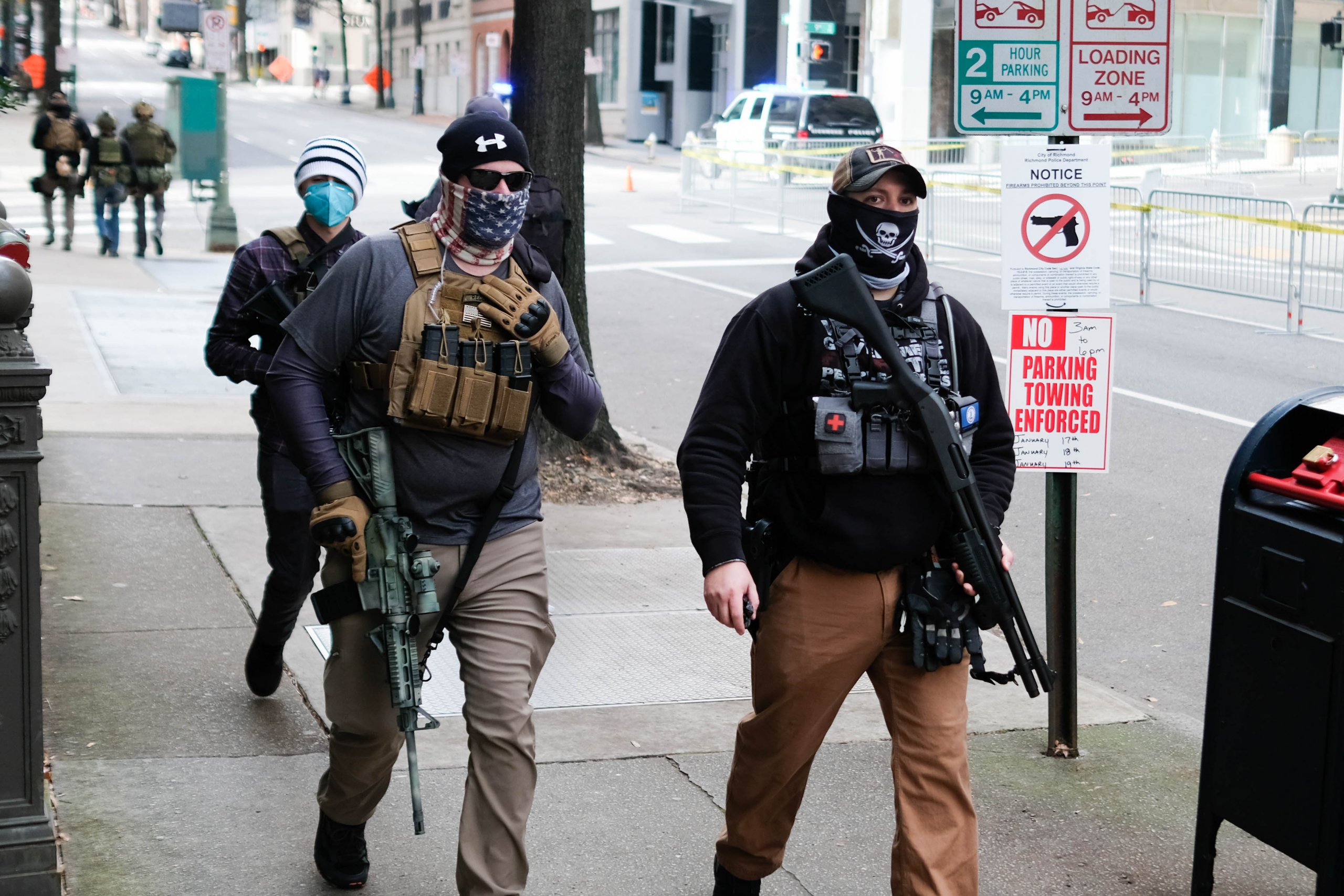 Men walk down Main Street with firearms during a pro-gun rally in Richmond on Monday, Jan. 18, 2021. A sign warns that guns are banned at demonstrations. (Ned Oliver/Virginia Mercury) 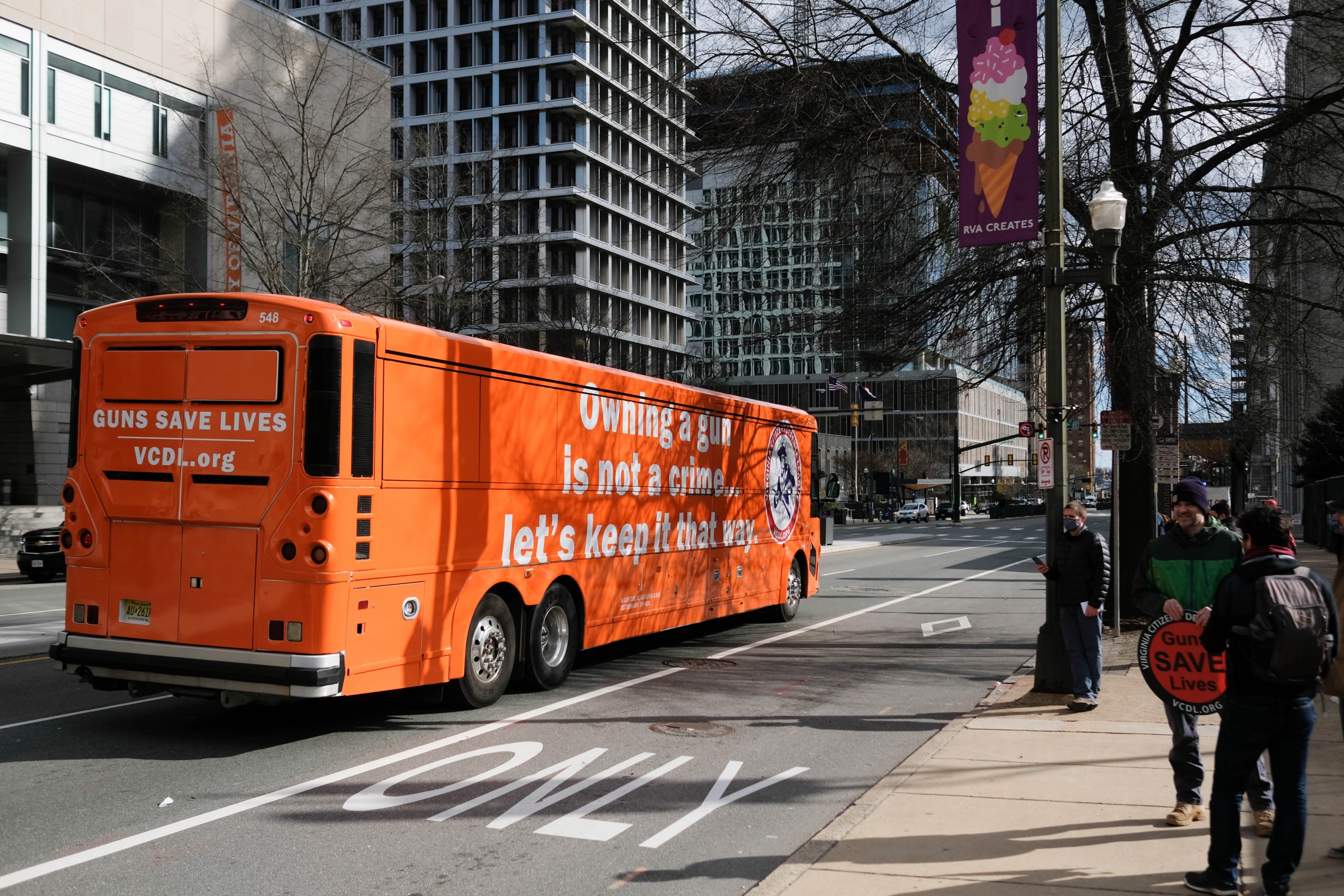 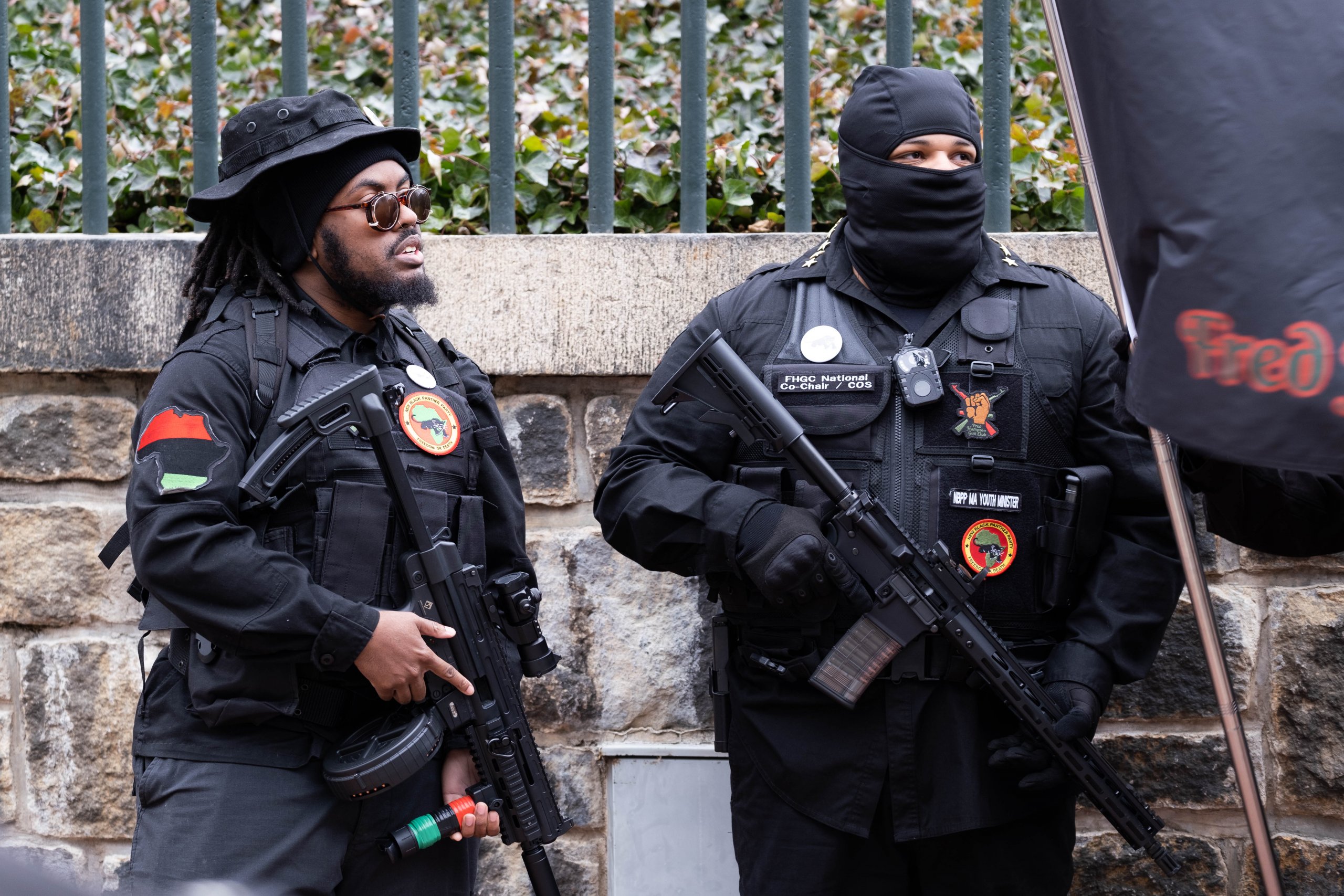 With tensions high following the right-wing riot at the U.S. Capitol earlier this month, Virginia officials took several precautions, including shutting down the grounds of the state Capitol, putting up fencing and cancelling permits for other groups planning events. The VCDL has been holding its annual Lobby Day event for decades, but other interest groups, including advocates for gun control, typically hold events with policymakers on the same day.

The prospect of potential violence tied to President-elect Joe Biden’s inauguration Wednesday has added to security concerns in many state capitals.

Since last year’s massive rally, the city of Richmond passed a new gun-control ordinance allowing guns to be banned in city buildings, parks and at political rallies in public spaces. That law applies to planned gatherings for which the city has issued a permit, as well as more impromptu events “that would otherwise require a permit.”

Last August, Mayor Levar Stoney retweeted a video of a militia march in Richmond, using it as an example of why the new law was needed.

“You don’t need to brandish a deadly weapon to make a point,” Stoney said.

That ordinance was made possible by legislation the General Assembly passed last year. The state law requires local officials to post signs warning that guns are prohibited in certain areas. Richmond did that for Monday’s event, but the signs didn’t appear to make much of a difference in how law enforcement handled the presence of armed demonstrators.

Mike Dunn, a self-styled Boogaloo leader who has appeared at several protests and rallies in Virginia over the last year, said he and his group of nine had come to Richmond Monday to intentionally and “proudly” violate that law. Dunn’s armed group stood in a line next to the Capitol directly across from police.

“If they attempt to arrest my guys we will defend ourselves,” he told reporters.

He threw them over the fence in the direction of the cops pic.twitter.com/F2gGJnCLDP

At one point, Dunn walked through the crowd holding two of the signs that had been posted to give notice of the apparent gun ban in the area. He said someone else had given him the signs, then proceeded to throw them over a fence in the direction of the police.

“This shows that we don’t care,” he said.

The Richmond Police Department explained its interpretation of the law in a series of Twitter posts.

“Gatherings that would require a permit are groups of 11+ people obstructing pedestrian or vehicular traffic in the vicinity of the signs,” the department said. “As a reminder, Virginia is and remains an open carry state.”

Police had not announced any arrests in the vicinity of the Capitol as of Monday afternoon. However, Richmond officials said one man had been given a summons for carrying a concealed weapon without a permit near the Robert E. Lee statue on Monument Avenue, which became a focal point for Black Lives Matter activists last year. Police said they confiscated the firearm.

Earlier today, Franklin Thurston was issued a summons for possession of a concealed firearm without a concealed carry permit at W. Grace Street and Allen Avenue. Officers confiscated the firearm.

Many of the streets around the Capitol — which was largely empty of lawmakers with the House of Delegates meeting virtually and the Senate convening at the Science Museum of Virginia — were blocked off in advance of Monday’s event. There appeared to be at least several dozen armed demonstrators, though many were traveling in small groups of fewer than 10 people.

Virginia also has a law on the books restricting the carrying of loaded weapons with high-capacity magazines in certain localities, including Richmond, but that too has not been strictly enforced at pro-gun rallies.

The heavily armed groups mixed in with more conventional gun-rights proponents affiliated with VCDL, many of them getting their message across by flying flags from their vehicles and honking their horns as they paraded up and down Broad Street.

At many points during the day, the media presence seemed to far outweigh the number of gun-rights proponents who demonstrated outside their vehicles.

Last year’s rally didn’t prevent Democratic majorities in the General Assembly from passing most of the big-ticket gun bills on their agenda, including legislation to expand background checks to all gun sales, restore the state’s one-handgun-a-month rule and institute a red flag law that allows authorities to take guns from people deemed a danger to themselves or others.

Lawmakers did not pass a bill banning assault-style weaponry, the proposal gun-rights groups fought the hardest to stop.

“If last year didn’t make a difference, the governor and his cohorts wouldn’t have tried so hard to shut us down this year,” Van Cleave said.

The VCDL was denied a permit for this year’s event after other groups signed up for all the time slots allotted for the day, according to The Washington Post.