Whither the GOP? Virginia will be center stage in determining party’s direction post-Trump.

Trump supporters stormed the U.S. Capitol during a deadly riot in 2021. (Alex Kent/ For the Tennessee Lookout)

There’s a reckoning ahead within the Republican Party and, when it’s over, we will know whether it can return as a serious political force or remain mired for the foreseeable future in the tick-infested mud gulch where Donald Trump wrecked and abandoned it like a stolen car.

Virginia is the first battleground in that nationwide reckoning as Republicans this year try to end a drought of 12 years without a statewide victory in next fall’s gubernatorial election.

The Virginia GOP has just a few months to shape its identity in a post-Trump world. Will it continue in the likeness of Trump, who is about to leave office after Wednesday’s deadly mob insurrection attempt at the U.S. Capitol as the most disgraced American president since Andrew Johnson? Or will it restore its bearings as a party whose candidates, positions and rhetoric click with the state’s dominant urban and suburban electorate by articulating conservative solutions to kitchen-table concerns.

The last time Virginia’s GOP put that combination together was 2009, the depths of the Great Recession, when Bob McDonnell made voters, without regard to demography or geography, forget his socially conservative record during a campaign laser focused on one issue: jobs. The GOP ticket won all three statewide offices in a rout that fall.

In the first months of a post-Trump America, is it even possible for the party to pick a traditional nominee more in the mold of a 2009 McDonnell? Or will the party double down on Trump-style populists whose divisive rhetoric resonates only among the state’s shrinking pool of older, mostly White rural voters.

That choice will be the unspoken subtext over the next several months as candidates begin making their pitch to Virginia Republicans for the gubernatorial nomination to be decided at their statewide convention at a date yet to be determined.

That convention’s verdict will be a definitive statement about the foreseeable future of the state party and perhaps beyond.

State Sen. Amanda Chase, a Trump apostle who panders to White nationalist sentiment with baseless conspiracy theories, is a declared GOP candidate for governor. She attended Wednesday’s infamous rally and had her Senate Facebook account suspended for 60 days after claiming falsely that rioters who sacked the Capitol were radical leftist Antifa infiltrators. She wasn’t cowed, using the suspension for a fundraising email over the weekend. 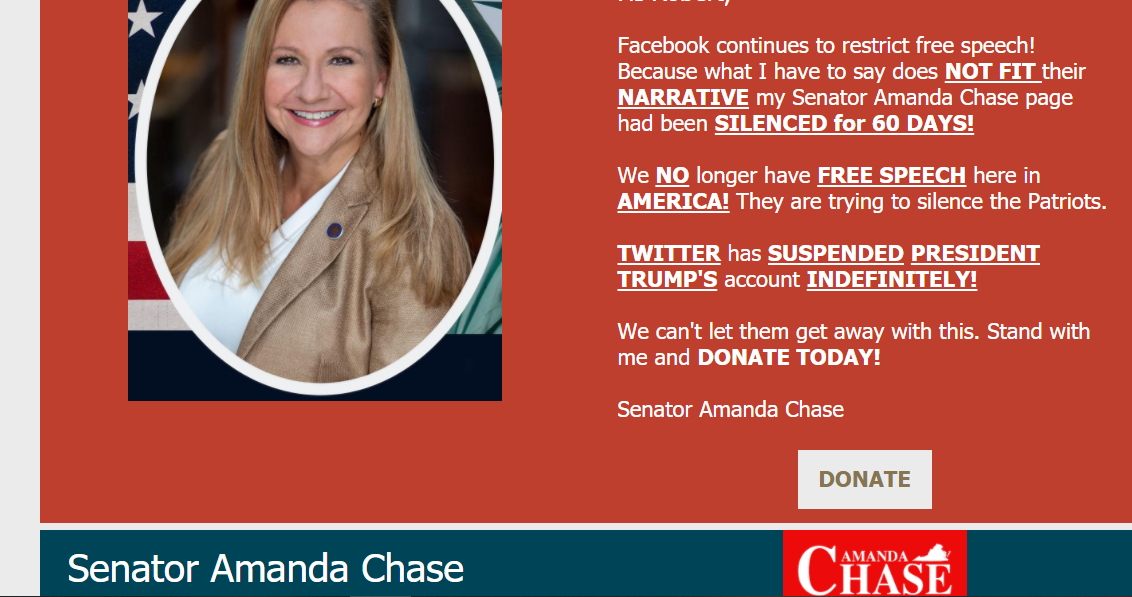 In December, she implored Trump to declare martial law to stay in power notwithstanding his election defeat.

“To my thinking, their convention is a pivotal moment. It really will define which direction the Republicans are going in this election cycle and beyond,” said political scientist Mark Rozell, dean of George Mason University’s Schar School of Policy and Government. “Are they going to take the most ideologically extreme candidates, or do they want to occasionally win elections and hold power and influence policy?”

“Go the Amanda Chase route, you further sink the party into irrelevance. Nominate a mainstream conservative with a softer image – a Kirk Cox type – it’s a different story,” Rozell said.

Former Lt. Gov. Bill Bolling was on the last victorious GOP ticket with McDonnell a dozen years ago and provided much of its business community gravitas for the pro-jobs message that caught fire with voters and the private-sector titans who write fat campaign checks. What worked then can work again, said Bolling, who now does business consulting and teaches government and politics classes at Virginia Commonwealth University and GMU.

“We’re a very different Republican Party from the last time we won in 2009,” he said. “It’s not that it’s necessarily more conservative. I think the party was conservative then and is conservative now. It’s not so much about the policies the party has pursued. It’s about this ideological rigidity and this aggressiveness and combativeness and mean-spiritedness. We saw that just explode in the Trump years.”

The crescendo came Wednesday after Trump personally exhorted his seething, militant supporters to storm the Capitol and disrupt House and Senate members who were certifying the Electoral College vote count that would formalize Joe Biden’s victory over Trump.

For some Republicans — though, pointedly, not all — live images of rioters carrying Trump and Confederate flags as they terrorized members of Congress, looted and ransacked their offices and desecrated the Capitol’s halls during hours of violence that left five people dead were too much. A growing number of Republicans in Congress are signaling support for Trump’s removal or second impeachment in less than a year, set to begin today in the House. Twitter, Trump’s dominant communications conduit to 90 million followers, permanently banned him on Friday, citing his use of the social media platform to traffic in conspiracy theories that could incite further mayhem.

“I think everyone recognizes that a red line was crossed, that something broke,” said Shaun Kenney, a former state GOP executive director, conservative writer and a critic of Trump. “What encourages me is that conservatives, as apart from the nationalists, have finally found their red line, the point beyond which we will be pushed no further.”

But will any of that matter? Has the party, with the tragedies of the past week, hit rock bottom hard enough to end its infatuation with angry populism and try a new approach — even if the new approach is a proven older one?

The next few months will tell. Kenney and Bolling agree with Rozell that the course charted by the convention will be consequential if not existential.

“If Amanda Chase is your (GOP) nominee, there will be a third-party candidate or at least an independent, and the Republican Party of Virginia will be in divorce court for the next four years,” Kenney said.

A three-way general election that splits conservatives between two candidates would all but guarantee the Democrats the keys to the Executive Mansion for another four years and continued control of the House. It would more than negate two rare circumstantial advantages shaping up for the GOP this year.

In 2021, the GOP won’t labor under a President Trump. His stench was so overpowering in Virginia’s last gubernatorial race that Ed Gillespie, a likeable, well-funded pro-business Republican who in 2014 came breathtakingly close to unseating, Sen. Mark Warner, the modern day paterfamilias of Virginia Democrats, got crushed by Democrat Ralph Northam less than one year into Trump’s presidency and just three months after the fatal “Unite the Right” riot in Charlottesville.

Democrats will also own the Northam administration’s thus-far lackluster record of getting the coronavirus vaccine distributed and into Virginians’ arms in every corner of the commonwealth. With the pandemic now surging to its worst levels yet and even worse in the weeks ahead, Republicans could have a powerful issue gifted to them unless state agencies significantly (and uncharacteristically) up their game — and fast.

There’s a Confucian curse that, translated from Chinese, goes: “May you live in interesting times.”

If you’re a Republican in Virginia, it doesn’t get more interesting.

Whither the GOP? Virginia will be center stage in determining party’s direction post-Trump.

Across cultural lines, home schooling has boomed since… by Jeff South January 3, 2022
Fed up, the vaccinated find their voice by Bob Lewis August 30, 2021
In tight Virginia governor’s race, policy takes backseat to… by Graham Moomaw October 28, 2021