Traffic flows over the American Legion Bridge along I-495, the Capital Beltway, on the day before the Thanksgiving holiday November 22, 2006 between Virginia and Maryland. (Photo by Chip Somodevilla/Getty Images)

Virginia isn’t committing just yet to join the Transportation and Climate Initiative, a regional proposal that aims to reduce carbon emissions from the transportation sector using a cap-and-invest model already in use for power plants.

On Monday, TCI leaders unveiled a long-awaited final framework for the program and announced Washington, D.C. and three New England states — Massachusetts, Connecticut and Rhode Island — had formally signed a memorandum of understanding committing to decrease transportation emissions by 30 percent by 2032.

Virginia and seven other states, though, haven’t signed the memo of understanding, opting instead to issue a statement pledging their “continued collaboration and individual actions to equitably reduce air pollution, create healthier communities, and invest in cleaner transportation.”

Alena Yarmosky, a spokesperson for Gov. Ralph Northam’s office, said the governor hasn’t ruled out the possibility of signing the memorandum of understanding at some point in the future.

Asked why Virginia isn’t jumping on board now, Yarmosky said “Virginia remains a participant in the Transportation Climate Initiative, and we continue to work closely with fellow states to develop a robust framework.” She pointed out that Virginia was the first Southern state to join the Regional Greenhouse Gas Initiative and called the commonwealth “a national leader on combating climate change and reducing greenhouse emissions — that work is continuing.”

A familiar framework for capping carbon

Beginning in 2015, TCI states began exploring the use of market-based policies to reduce greenhouse gas emissions from the transportation sector, which are estimated to be more than 40 percent of the Northeast and Mid-Atlantic regions’ overall carbon emissions. Virginia became involved in the process in 2018 as participating states ramped up efforts to craft a regulatory framework on which a broad regional program could be based.

The plan that’s emerged, culminating in the issuance Monday of the finalized memo of understanding, closely resembles the Regional Greenhouse Gas Initiative, a cap-and-invest program that targets carbon emissions from power plants. In fact, 10 of the states that have been involved in developing TCI are also participants (or, in Virginia’s case, soon-to-be participants) in the RGGI market.

“The MOU is important because it’s the end of the beginning,” said Chris Bast, deputy director of Virginia’s Department of Environmental Quality. “It’s the final program details.”

In its broad strokes, the final MOU closely tracks the draft program design released last December. TCI will set a regional annual emissions cap that declines over time and will require fuel suppliers — the companies that sell and transport gas and diesel — to purchase emissions allowances in an auction. The proceeds of those auctions will then be redistributed back to the states for reinvestment in clean transportation.

Like RGGI, TCI will effectively function as a unifying agenda that individual states agree to follow — an approach that has allowed RGGI to skirt legal challenges that accuse it of violating the U.S. Constitution’s Compact Clause forbidding a state to “enter into any agreement or compact with another state” without congressional consent. Under this approach, the collective develops a “model rule” that each participating state then adopts according to its own legislative or regulatory procedures.

The TCI model rule is expected to be developed during 2021 in a process including not only the four signatories of the memo of understanding but also the other eight states that issued their statement of support Monday. While early participant Maine is notably absent from the group, North Carolina is the most recent addition, edging out Virginia for the title of southernmost participant.

“We remain at the table on that,” said Bast.

In a news conference Monday, Connecticut Department of Energy and Environmental Protection Commissioner Katie Scharf Dykes said that while wide variations in fuel prices make it “difficult to predict the precise implications for consumers,” TCI’s most up-to-date modeling estimates gas prices could rise by 5 cents per gallon as a result of the program.

Collectively, signatories Connecticut, Massachusetts, Rhode Island and Washington, D.C. are expected to bring in nearly $300 million in revenues during the first year of implementation, slated for 2023. Under the terms of the memo of understanding, at least 35 percent of all state proceeds must be directed “to ensure that overburdened and underserved communities benefit equitably from clean transportation projects and programs.”

Karen Campblin, environmental and climate justice chair of the Virginia State Conference of the NAACP, said the minimum allocation was “not where it should be” and that environmental justice advocates had pushed for it to be as high as 50 or 75 percent.

She also expressed concerns about the equity advisory body TCI will require each state to convene, worrying that “not only will it not have a substantive number of members from frontline or marginalized communities, but it could end up being a political position that the administration is able to ignore their recommendations.”

“We really need to make sure that equity is not just a window dressing, that it really is deep-rooted and is well linked to the program and not just put in place to say, ‘We did equity,’” she said.

An uncertain road in Virginia

With the memo of understanding in place, TCI is now turning its attention to the development of the model rule, a process in which Virginia will participate through the Department of Environmental Quality.

Bast said that any adoption of such a rule would require both legislation and regulation, in that order. While a May 2017 advisory opinion by Attorney General Mark Herring found that the Virginia Air Pollution Control Board already possessed the authority to set a statewide emissions cap for new and existing fossil fuel plants, “in this instance there has not been an opinion that we have existing authority to regulate carbon from mobile sources,” said Bast.

Still, he struck a cautious note: “I think TCI has a lot to offer, but we definitely would have to figure out if we were to do it how to implement it here in Virginia.”

Any legislative effort is likely to face resistance. Several Republicans have decried TCI as a gas tax that will unfairly burden consumers. Former Republican House Speaker William Howell, who also serves on the board of the Thomas Jefferson Institute for Public Policy that has lobbied against TCI, condemned the program in a Richmond Times-Dispatch editorial this November as “a tax increase, taking money from one group of citizens to spend on another group of citizens.” 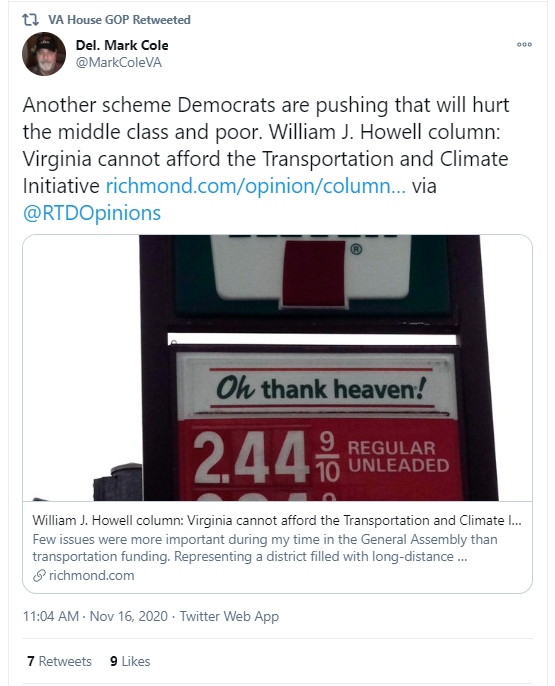 Gas stations have also opposed the proposal. Mike O’Connor, president of the Virginia Petroleum and Convenience Marketers Association, which represents almost 3,500 gas stations in the commonwealth, said in an email that TCI “would have expropriated the petroleum marketing industry.”

O’Connor said the VPCMA looks forward to serving the growing number of electric vehicles on the road and supports policy changes such as tax provisions “to encourage the retirement of older vehicles, and purchases of new cars that are more protective of the environment.”

“However, it is important to acknowledge that all investments we make in electric charging stations must be self-funded,” he wrote. “The government and regulated utilities must not be allowed to unfairly compete with the private sector by shifting those costs onto the backs of consumers and/or ratepayers.”