WASHINGTON — Congress on Monday night cleared and sent to President Donald Trump the first major COVID-19 relief measure since the spring, a sprawling spending bill that would provide $900 billion in pandemic-related aid but still didn’t go far enough for many Democrats.

House leaders divided the bill into two parts and passed the emergency relief portion on a 359-53 vote. Another portion, which included Pentagon and other spending for the coming year, passed 327-85. The Senate combined the two bills and cleared the package in an overwhelming 92-6 vote shortly before midnight. The White House has signaled Trump will sign the 5,593-page measure.

The bipartisan relief deal that ended months of haggling would extend an array of long-sought assistance, including direct payments to Americans of $600; an additional $300 per week in unemployment benefits; and billions more in loans to struggling small businesses.

We need to help the American people and you can’t let the perfect be the enemy of the good. I will be voting YES on the #COVID19 Relief Bill tonight because it will help countless Americans during this difficult time. pic.twitter.com/PSGAIe1jSP

It also would send nearly $9 billion to states to aid in vaccine distribution and $22 billion for more coronavirus testing and tracing. The measure contains billions more in child care assistance, help for schools, food aid and money for farmers; transportation funding; rental assistance and an extension of the eviction moratorium; and an end to surprise billing in emergency and scheduled care.

It doesn’t provide additional aid sought by state and local governments struggling with massive budget gaps, nor the liability protections sought for employers who may face COVID 19-related lawsuits if employees become infected with the virus. The measure also doesn’t extend the suspension of student loan interest and payments that will expire at the end of January.

I voted to pass this imperfect but desperately-needed relief deal including enhanced unemployment benefits, aid to small businesses, & rent relief.

More must be done and I’ll continue working across the aisle to help see our community through this crisis.https://t.co/6mN9pIwLju

That stimulus bill was sandwiched into a broader piece of legislation totaling $1.4 trillion that pays for federal government operations for the rest of the fiscal year, and was under debate in Congress just hours ahead of another deadline to avoid a government shutdown.

While the fiscal 2021 government operations will be funded through September, congressional Democrats described the emergency pandemic aid as only a small piece of what’s needed to address the ongoing crisis.

Millions of Americans remain on the unemployment rolls and the state-based vaccine distribution efforts have barely begun, while rising case counts have led to a new wave of restrictions on businesses and gatherings across the country.

“I would hope that as we see the need for what we have done in this nearly $900 billion legislation that we’ll vote on today that everyone understands it’s a first step,” House Speaker Nancy Pelosi (D-Calif.) said in a floor speech Monday. “It’s a first step, as President-elect Biden has said. It’s a first step, and we will need to do more.”

The relief package is the first major aid legislation to reach Trump since the CARES Act was approved in March, due to months of stalemate over the scope of another aid package. The Democratic-controlled House approved several additional relief measures, but those proposals did not advance in the Republican-controlled Senate.

Senate Republicans have cast blame on Democrats in that chamber for blocking aid proposals, while Democrats argued that those alternative bills did not go far enough.

Despite months of delays, unnecessary posturing, and piles of ignored legislation by @SpeakerPelosi and House Ds, the package passed today reflects key bipartisan priorities, including several wins I was proud to author and advocate for. More: https://t.co/YTZKxgKE9d

In touting the new relief bill Monday, Senate Majority Leader Mitch McConnell praised the measure’s price tag, saying it requires less than $350 billion in new spending because more than half a trillion dollars in previously approved spending is being repurposed.

“No sprawling left-wing wish list. No unconstrained bailouts for state and local governments, with no connection to COVID needs. Just smart, targeted, bipartisan policies,” McConnell said, adding that the bill will do an “incredible amount of good.”

You’d never know HE was the one who blocked that help for eight long months.

A deal on the pandemic relief bill appeared in sight late last week, but those talks stretched through the weekend due to disagreement over a provision sought by U.S. Sen. Pat Toomey (R-Pa.) to ensure that several temporary Federal Reserve lending programs will end this year.

Democrats objected to the provision, arguing that the language he sought was too broad and could overly constrain the Fed’s authority. Negotiators worked over several days to narrow the language sought by Toomey, clarifying which programs would wind down at the end of the year.

The bill’s full text was only released early Monday afternoon, just hours before House lawmakers launched debate on the measure.

After several delays and last-minute haggling, we finally began receiving text of the COVID relief bill at 11:30am this morning. This bill is likely to be thousands of pages, so I’m canceling my afternoon appointments & digging into the bill. As Reagan said, “Trust, but verify.” pic.twitter.com/8fGMPU0htJ

“But this action in the lame duck session is just the beginning. Our work is far from over,” Biden added.

What’s in the bill:

• $166 billion in another round of economic impact payments that will go directly to Americans.

• Language stating that taxpayers without a Social Security number are ineligible to receive stimulus payments unless married to a spouse that has a Social Security number or children with them. This provision fixes a problem in the first Covid-19 relief bill that excluded stimulus payments to families that included both citizens and undocumented people.

• An additional $300 a week in benefits for the jobless, through March 14.

• An extension of the Pandemic Unemployment Assistance program, which expanded coverage to the self-employed, gig workers and others in non-traditional jobs.

• An extension of the Pandemic Emergency Unemployment Compensation program, which provides additional weeks of federal unemployment benefits to those who exhaust their state benefits

• Extension of a  tax credit to employers who offer paid sick leave.

• $284 billion in loans through the Paycheck Protection Program.

• $20 billion for grants through the Economic Injury Disaster Loans program.

• $15 billion for struggling live event venues. There is a set-aside of $2 billion for eligible entities that employ not more than 50 full-time employees.

• A 15 percent increase in benefits for six months for recipients of the Supplemental Nutrition Assistance Program, or food stamps, at a cost of $13 billion. SNAP eligibility is also expanded for certain college students, including those eligible for federal or state work study.

• $5 million to expand a program in SNAP online purchasing.

• $400 million for the Emergency Food Assistance Program, to be used through Sept. 30, for food banks and pantries.

• Emergency costs covered for child nutrition programs, such as  school meals and child and adult care food programs, during the pandemic.

• $175 million for additional emergency food assistance through the USDA for older Americans, including $7 million for tribal nutrition assistance.

• $614 million to Puerto Rico and American Samoa for nutrition assistance, including $14 million for the Commonwealth of the Northern Mariana Islands.

• $11 billion to USDA to help agricultural producers, growers and processors.

• $100 million to support local farmers, farmers markets and others disrupted by the pandemic, through the Local Agriculture Market Program.

• An end to surprise billing in emergency and scheduled care.

• $1.25 billion to support research and clinical trials related to the long-term effects of COVID-19.

• A one-time, one-year increase in the Medicare physician fee schedule of 3.75 percent.

• $8.75 billion to aid in distributing vaccines.

• $22 billion to states to pay for testing and tracing efforts.

• $25 billion in rental assistance and an extension on the eviction moratorium until the end of January next year.

• Up to $2 billion through states for families with funeral expenses due to COVID-19 through Dec. 31. The bill requires the Federal Emergency Management Agency to provide this assistance, and waives an otherwise required 25 percent state match.

• $4 billion for a schools relief fund to be administered by governors. Of that, $2.75 billion will go toward grants for non-public schools. States are barred from using the money for school vouchers or tax credit scholarship programs.

• $7 billion for increased access to broadband internet, including $3.2 billion in an emergency fund for low-income families’ access through the FCC and $1 billion for a tribal broadband fund.

• $819 million for outlying areas and Bureau of Indian Education-operated and funded schools and Tribal Colleges and Universities.

• $2 billion to help with operation costs for airports, including economic relief for concessionaires.

• $10 billion for state departments of transportation that can be used to replace funds lost by other sources of revenue.

• $1 billion for Amtrak, and prevents any further employee furloughs.

• $14 billion in aid for transit systems.

• Phase out of the use of hydrofluorocarbons (HFCs), which is a potent class of greenhouse gases that are used in refrigerators and air conditions, by 85% over the next 15 years.

• $35.2 billion in research and development for a clean energy bill for the next decade on technologies that combat climate change such as energy storage, carbon capture, among others.

• A delay in a scheduled phase out for renewable and investment tax credits.

What’s out of the stimulus bill:

• Student loan relief: The package does not extend the suspension of student loan interest and payments, which is set to expire at the end of January.

UPDATE: This post has been updated to reflect the Senate vote.

CORRECTION: This article has been updated to correct the Senate vote. 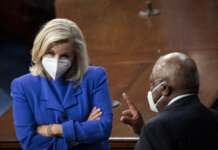