A hairy mini-monster from Virginia is drawing worldwide attention.

It is invading, taking over our state and making us vomit.

Except that it isn’t.

The 1½-inch-long venomous creature, called a puss caterpillar, can indeed hurt you, as it did a New Kent County woman on Sept. 4. But the little creeper’s threat has been magnified by extensive — and often outlandish — news coverage from the U.S. to the United Kingdom and Asia.

“It’s the new murder hornet,” said the New Kent victim, Crystal Spindel Gaston, referring to Asian giant hornets that made news in the Pacific Northwest. “The puss caterpillar has taken over. The murder hornet got bumped for the new in insect.”

The Virginia Mercury reported Gaston’s painful sting from a puss Sept. 11. The story quickly spread to other news sites.

Eric Day, a Virginia Tech entomologist who appeared in that first article, figured the story would take off. “It just had the elements that kind of get people’s attention.”

The puss caterpillar looks strange. (Some compare it to a bad toupee, or Donald Trump’s hair.) It is dangerous. (Experts say it delivers the most severe sting of any caterpillar in the country.) Most people had never seen it or even heard about it. And Gaston was minding her own business at home when she was stung.

“We run into this with entomology all the time,” Day said. “If there is going to be a story about insects that are good and everything, it’s just too boring. They don’t want to know about it. But if it’s scary or damaging or icky or stings or whatever, that’s the part that really gets the story going.”

Day said most of the coverage he saw was responsible but that some portrayals of the creature invading or taking over Virginia were over the line.

“This is a native insect that is rarely encountered, but when it is, you need to be careful with it,” Day said. “That’s the story. But what kind of goes out there becomes the scary invader.”

Gaston said someone has mentioned the caterpillar to her every day since the original story came out. “There was a day about two weeks ago when I had to turn my phone off because it was just non-stop.”

When Gaston talks to people in person, “They all, almost always, have that same face — that sort of like half-disgust, half-‘really-I’m-curious’ look — like you’d have about a horror movie.”

The puss caterpillar is covered with soft, brownish hairs that conceal hollow, venom-filed spines that can break off in your skin. The venom can cause extreme pain and, rarely, nausea, vomiting and even seizures. The caterpillar is called a puss because its hairs resemble the fur of a cat.

“The creep factor is huge in this story because it’s just such a bizarre-looking thing,” Gaston said.

Many people have noted that the puss turned up, of course, in 2020 —  a year already beset with vicious politics, racial tensions and a pandemic.

Preparing for a Labor Day weekend trip with her husband and dog, Gaston was reaching into her car in her front yard when she felt “like a scorching-hot pain” pass through her right calf. She had brushed a puss that was attached to the side of her car.

Gaston and family started their trip, but they detoured to an emergency room when the pain worsened to the point she was “seeing stars and was doubled over.”

At the ER, Gaston, the doctor and nurses searched online for information, she said. When Gaston showed them a photo of the puss, they seemed flummoxed, she said. “One of them actually said, ‘What the hell is that?’ “

Gaston was treated with antihistamines and over-the-counter pain meds and released. Three days passed before she felt almost normal.

Versions of the story appeared online, in print or on the air in news outlets including the New York Times, the Washington Post, Fox News, CNN, the Indian Express (an English-language  newspaper in India), Prevention Magazine and PCT Magazine (for Pest Control Technology), as well as sites across much of Virginia.

After about three weeks, the stories seemed to slow down. But like any good monster, the puss refused to die.

On Oct. 6, the Virginia Department of Forestry issued a warning —  “Social Distance away from this caterpillar!” — about the puss on its Facebook page. Suddenly, the frightening fur ball was a hot topic again. Tech’s Day said a New York Times reporter called him at home on a weekend.

The point of the post was “to let people know this is out there and don’t touch it or let your kids go pick it up,” said Michelle Stoll, the forestry department’s public information director. “I don’t know why it went viral like that.”

“Each day each headline got more and more preposterous,” Stoll said. “Our concern was that people would go start killing these caterpillars, which are an important part of the food chain.”

Stoll estimated 75 percent of the stories were “outlandish,” 10 percent were responsible and the rest  mixed.

She said her favorite headline was the one about Virginians left vomiting and feverish, “but it’s not true at all.”

“Almost an exact copy of the toupee my grandpa wore in the 80’s!,” one man wrote. “His was also venomous! We were always warned to stay away from it.”

Another man replied, “Puss caterpillars are nothing to joke about!”

For Gaston, an English teacher and former journalist, the puss encounter told another story — about what she sees as the shortcomings of journalism in 2020.

Gaston was quoted around the world. The quotes were often but not always attributed to the Virginia Mercury. And for those dozens of stories that ran after the Virginia Mercury piece, Gaston said, no one called her to check the accuracy of her story or get an update.

“I think it says a lot about the state of journalism today because I’m old school, and it’s sad and disappointing,” Gaston said. “It takes time to chase down stories, and these reporters are having to cover several beats and do several stories at one time.”

But overall Gaston is happy with the experience.

“It was just really important to me to get this story out because of children and pets. If this caterpillar dropped an adult like me to my knees, practically, it just hurt my heart to think what it could do to a child.”

The puss is the caterpillar form of the harmless southern flannel moth. It lives from Maryland to the Deep South and west to Texas.

The puss has been in Virginia a long time, but it is uncommon. Most people rarely if ever see one.

So was there an outbreak of homegrown creepers this year?

There seems to have been an increase in cases reported to the Virginia Poison Center at Virginia Commonwealth University, “which is consistent with the reports of common sightings,” said center director Rutherfoord Rose. “Not sure why this fall was any different.”

Still, the numbers of caterpillar-sting reports in recent years “are too small for meaningful comparisons,” Rose said.

“’You could say there’s a four-fold increase, but that’s sort of a stretch. …These are still very low numbers.”

While they continue to generate headlines, Virginia’s puss caterpillars have taken their leave for now, Day said. They have wrapped themselves in tan-to-brown silky cocoons, hanging from twigs, and await their long winter’s nap.

In the spring the creatures will emerge as young moths, mate and lay eggs.

The eggs will hatch, and the eternal cycle of insect life and bug-eyed human horror can begin anew. 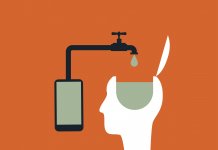 Here’s how to prevent the spread of misinformation 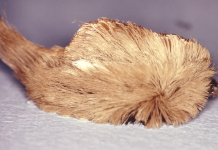 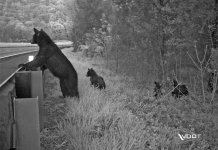 Step aside murder hornet: How a puss caterpillar sting in Virginia took the internet by storm.

Can media polls still get it right? Despite shortcomings, discerning voters...