The General Assembly sent a bill establishing rules for how police officers use chokeholds to Gov. Ralph Northam’s desk Wednesday after the Senate rejected a blanket ban on the maneuver and felony penalties proposed by lawmakers in the House of Delegates.

The legislation, introduced in response to the death of George Floyd under the knee of an officer in Minneapolis, stipulates that police may only use neck restraints in cases where it “is immediately necessary to protect the law-enforcement officer or another person.”

Democrats in the House expressed disappointment they couldn’t reach a compromise with the Senate on a stronger prohibition, warning the final version will allow police to continue to use the tactic in many cases.

Foy proposed the House version of the bill, which would have made any use of a chokehold by police a Class 6 felony. It cleared the chamber last month on a 55-43 vote, with Democrats supporting the measure and Republicans unanimously opposing.

But lawmakers in the Senate, where Democrats also have a majority, rejected the approach, arguing police should be allowed to use neck restraints as a last resort and that it was unnecessary to create a new felony charge.

Under the Senate’s version, police who use chokeholds in situations where they don’t believe it’s immediately necessary would face administrative penalties, including the loss of their license to work as a sworn officer.

Sen. Scott Surovell, D-Fairfax, argued that strangulation is already a felony and that in many cases it would be harder to pursue criminal charges than administrative penalties in cases of wrongdoing. And he said that while the House’s proposed ban sounds stronger than the Senate’s language, there would be no practical difference because common law establishes a right to self defense, meaning an officer could use a chokehold when they believe it’s necessary to protect themselves regardless of any prohibition to the contrary.

“We don’t need to muck up our criminal code anymore with a new felony on the books,” he said.

Foy said she agreed to the Senate’s amendments Wednesday after it became clear the chamber was unwilling to bend on the issue. “We were informed that the Senate is not inclined to impose a Class 6 felony on a law enforcement officer, even if there’s a deadly result,” she said.

Police groups opposed both versions of the law, but said they preferred the Senate’s approach, arguing a ban on chokeholds with no exceptions would force officers to use deadly force in situations where neck restraints could have presented a nonlethal alternative.

“This is taking away some of the tools available in their tool belt to protect themselves and others,” Dylan Bishop, a representative of the Virginia Law Enforcement Sheriffs, told Senate lawmakers during a hearing last month. “But our opposition to this bill is much more watered down now that the (Senate version) has been adopted by the committee.”

Correction: An earlier version of this story misstated the effect of legislation establishing a statewide curriculum for police training academies. 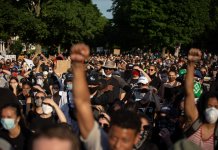 Virginia lawmakers vote to limit use of chokeholds by police, but reject outright ban

‘Still an ambush state’: The move toward discovery reform is going...