President Donald Trump said Monday that he would announce a replacement for the late U.S. Supreme Court Justice Ruth Bader Ginsburg by either Friday or Saturday.

During a morning interview on “Fox and Friends,” the president said the administration wanted to pay its respects to Ginsburg, who died Friday night from complications with cancer, before announcing a nominee later this week.

The president did not disclose his other picks during Monday’s interview.

The president nominated Barrett for the 7th Circuit, which runs jurisdiction in Wisconsin, Indiana and Illinois, in 2017. Her anti-abortion views have made her a favorite among conservatives.

She also clerked for the late Supreme Court Justice Antonin Scalia after she graduated from Notre Dame University Law School.

Rushing was also nominated by Trump in 2018 to serve in the 4th Circuit, which includes Maryland, North Carolina, South Carolina, West Virginia and Virginia. She also clerked for Justice Clarence Thomas and was a partner at Williams & Connolly in Washington, D.C. When Trump appointed her to the 4th Circuit, which covers federal jurisdictions in North Carolina, Virginia, West Virginia, South Carolina and Maryland, LGBT and civil rights groups were quick to denounce the choice, The Washington Post reported at the time, citing her internship with a conservative Christian nonprofit that famously defended the Colorado baker who refused to bake a cake for a same-sex wedding.

But Lagoa, who has strong ties to Florida — a key battleground state for the president and his Democratic opponent, former Vice President Joe Bidden — is also a top contender.

The 11th circuit runs jurisdiction in Florida, Georgia and Alabama.

Lagoa is the daughter of Cuban immigrants and was born in Miami, where Trump and Biden are vying for Latino support.

In early September, Biden visited Kissimmee, Florida, to unveil a plan to support Puerto Rico, which is still struggling in the aftermath of Hurricane Maria from three years ago that left more than 3,000 Americans dead. After Hurricane Maria, thousands of Puerto Ricans settled in Florida, including Kissimmee and Orlando, which are areas with a high Puerto Rican population.

Similarly Trump announced a nearly $13 billion plan last week to help rebuild the island’s power grid that was damaged during the storm, leaving Americans without electricity for weeks.

The president acknowledged that Lagoa’s ties to Florida could help him in his re-election campaign.

“Florida, we love Florida,” he said.

The president said the Senate would have “plenty of time,” to confirm his nominee to a lifetime appointment on the Supreme Court before November’s presidential election.

While Senate Democrats have vocalized their opposition to filling the Supreme Court vacancy with 42 days till the presidential election, Senate Majority Leader Mitch McConnell (R-Ky.) issued a statement on Friday that the Senate would move to vote on a nominee from the president. McConnell refused to hold hearings for Merrick Garland, President Obama’s last nominee for the Supreme Court in 2016, arguing that the nomination should not be filled in a presidential election year. 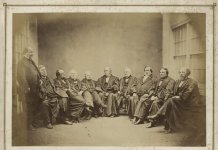 Packing the court: Lincoln and his Republicans remade the Supreme Court...