WASHINGTON — Transgender teen Andrew Adams used the boys bathroom, which aligned with his gender identity, when he enrolled as a freshman in 2015 at Allen D. Nease High School in Ponte Vedra, Fla.

Then two girls lodged a complaint and school authorities ordered Adams to use a gender-neutral or girls restroom instead. In 2017, he filed suit against the St. Johns County School Board.

“I am a boy and I know that with every fiber of my being,” he said at a trial in district court, which found in his favor.

Last month an appeals court handed him a second victory in his suit, one of a pair of cases that have major implications for transgender students in Florida and across the country and could eventually make their way to the U.S. Supreme Court. The rulings also are significant in Florida, where advocates say there are few protections in the law for LGBTQ people.

Adams called the victories “symbols of progress for the transgender community” in an interview.

“The ruling definitely doesn’t mean that nobody will get hurt like this again,” he told the Florida Phoenix. “But it means that students who might be … in a bad situation will have more evidence to support their side.”

The victories make it “a lot harder” for school districts to justify transphobic policies, he said. As a result, fewer students will be forced to use restrooms that don’t align with their gender or are separate from other student restrooms, and fewer will experience the trauma of suing for equal bathroom access while in high school, he said.

Tara Borelli, a lawyer at Lamda Legal who has argued Adams’ case, agreed, calling his victory a “beacon of hope for transgender kids.”

The cases center around Adams and Gavin Grimm of Virginia, who also went to court after he was barred from his high school boys bathroom.

Lambda Legal, a nonprofit legal advocacy organization, filed a lawsuit on Adams’ behalf in 2017, arguing that the school district bathroom policy violated the Equal Protection Clause of the 14th Amendment to the U.S. Constitution and Title IX of the U.S. Education Amendments of 1972 — which bans discrimination on the basis of sex but not explicitly on gender identity.

The trial was the first in the country involving bathroom access.

A Florida district court sided with Adams in 2018 and ordered the school board to allow him to use the boys restroom. A federal appeals court in Atlanta upheld the ruling in August.

“A public school may not punish its students for gender nonconformity,” the appeals court ruled. “Neither may a public school harm transgender students by establishing arbitrary, separate rules for their restroom use. The evidence at trial confirms that Mr. Adams suffered both these indignities.”

Grimm has a similar story.

He was using the boys restroom as a student at Gloucester High School until 2014, when the Gloucester County School Board adopted a policy requiring him to use alternative facilities after receiving complaints from some parents and residents.

The American Civil Liberties Union and the ACLU of Virginia sued the school board, a district court dismissed the claim and a federal appellate court overturned the ruling.

The Supreme Court was expected to review the case in 2017 but sent it back for reconsideration after the Trump administration that year rescinded Obama-era guidance protecting transgender students’ rights.

Grimm, whose case has drawn national attention, filed an amended complaint with the district court for nominal damages and a declaration that his rights were violated. A district court ruled in Grimm’s favor, and a federal appellate court upheld the ruling in August.

Both Adams and Grimm have since graduated from high school.

Adams’ victory made a big splash in Florida because of its lack of strong protections for LGBTQ people, said Rodrigo Heng-Lehtinen, deputy executive director for the National Center for Transgender Equality.

Florida, which is under GOP control, hasn’t enacted a statewide ban on discrimination against LGBTQ people or policies that recognize students on the basis of their gender identity.

Virginia, by contrast, ushered in a spate of new laws protecting transgender rights earlier this year after Democrats took control of the General Assembly last November.

Still, Eden Heilman, legal director of ACLU Virginia, called the Virginia decision “hugely important” because it affirms Grimm’s right to “live in accordance with his identity.”

The cases’ reach goes far beyond the men’s home states.

The rulings have “persuasive” authority beyond those states, Borelli added.

But opponents of equal bathroom access aren’t giving up.

They argue that allowing transgender youth to use bathrooms that align with their gender identity rather than their sex at birth threatens the privacy and safety of cisgender students, and they say bathrooms separated by sex are legal and gender-neutral restrooms are an “accommodation” rather than a “burden.”

“There is nothing unlawful, under either the Constitution or federal law, about a policy that separates bathrooms for schoolchildren on the basis of sex,” William Pryor, chief of the 11th Circuit Court of Appeals, argued in his dissent in Adams’ case.

Transgender rights advocates argue that bathroom policies that single out trasngender youth violate federal and constitutional law and say such policies harm them, not cisgender students.

Nationwide, nearly 2 percent of high school students identify as transgender, according to the U.S. Centers for Disease Control and Prevention. More than a third have attempted suicide.

Advocates note that transgender youth are at special risk of bullying and harassment, and bathroom policies that single them out are “very stigmatizing,” Maurer said.

The Gloucester County School board appealed last week, asking the entire 4th Circuit Court of Appeals to hear the case.

‘May not be the last chapter’

Borelli doubts the case involving Adams — now a sophomore at the University of Central Florida who is active in LGBTQ groups — is over either. “This may not be the last chapter,” she said.

The cases could eventually make their way to the U.S. Supreme Court — a prospect that Adams called “a scary thing” — despite a recent ruling in favor of transgender rights in the workplace.

But he and other advocates are buoyed by an increasing number of rulings in favor of transgender rights, including the high court’s blockbuster decision this summer. “Even though the Supreme Court didn’t specifically decide the question of restrooms, there’s only one way to apply its analysis and that is to require equal treatment for transgender students and employees,” Borelli said.

Heilman is less certain. “It is a helpful case,” but she said it’s hard to predict how the court would rule.

Change could come faster via the political process, she noted.

In 2017, the Trump administration revoked guidance issued by the Obama administration requiring public schools to allow transgender students to use bathrooms that align with their gender identity.

But Democratic presidential nominee Joe Biden has said he would reinstate the guidance if he wins this fall.

And Congress is considering legislation that would add explicit protections against discrimination based on sexual orientation and gender identity to federal civil rights law. The bill passed the U.S. House last year but has not been taken up in the GOP-controlled Senate. Its prospects will improve if Democrats win control of the chamber this fall. 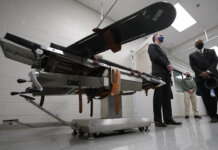