WASHINGTON — A high-profile dispute over whether to rename military installations that honor Confederates isn’t the only fight between the White House and Congress over this year’s defense authorization bill.

Another battle has been brewing below the surface that also has major implications for Virginia: whether to fund construction of one or two next-generation Virginia-class submarines next year.

In February, the Trump administration proposed funding only one of the fast-attack nuclear-powered submarines in fiscal year 2021, a 50 percent reduction from last year’s budget and a departure from long-standing military plans to build two of the subs per year, according to Sen. Tim Kaine, a Virginia Democrat who sits on the Senate Armed Services Committee.

After the president’s request was released, the Navy listed the “missing” Virginia-class submarine as its most important unfunded priority, according to USNI News.

Congress has since pushed back.

The U.S. House approved a National Defense Authorization Act (NDAA) in July that would authorize $6.8 billion for two Virginia-class submarines, an increase of $2.6 billion over the president’s request. The House also approved a spending package last week that would fund construction of both ships.

The difference would make possible construction of a second Virginia-class submarine, a Kaine aide explained. Advance procurement allows for the purchase of materials needed before construction begins, while regular procurement dollars are appropriated during construction.

Unlike the House, which would commit full, up-front funding for both Virginia-class submarines, the Senate is essentially “buying one and making a down payment” on another, said Bryan Clark, a senior fellow at the Hudson Institute with expertise in naval operations.

The Senate had less money than the House to work with because Senate Republicans authorized $3.6 billion in the Senate NDAA to replenish funding from military construction accounts that Trump had taken to build a wall at the southern border, the aide said. The House NDAA did not authorize use of those funds, according to Stars and Stripes. 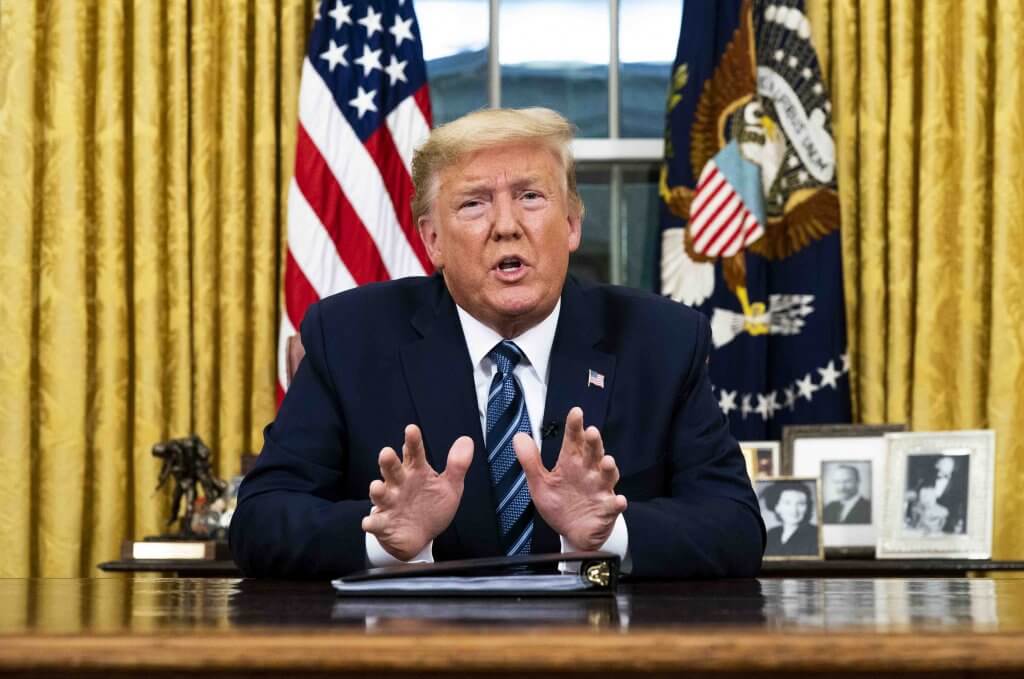 US President Donald Trump addresses the nation from the Oval Office about the widening Coronavirus crisis on March 11, 2020 in Washington, DC. (Photo by Doug Mills-Pool/Getty Images)

The defense authorization bills now move to a conference committee, where House and Senate negotiators will iron out differences between them before submitting a single piece of legislation for final passage and the president’s signature.

U.S. Rep. Rob Wittman — the ranking Republican on the House Armed Services subcommittee that has jurisdiction over seapower forces — expects to be named to the conference committee when members are appointed.

Wittman, who represents Virginia’s 1st District, fought to restore full funding for the second Virginia-class submarine and says chances are “very good” that both will be funded this year.

“I am confident that we can come out of the conference committee with agreement that we will be fully committed to construct a second submarine and that it will be fully funded,” he told the Mercury.

The difference between the House and Senate bills is essentially over funding methodologies, he said, noting that both would allow construction of a second ship to take place.

“The Senate has their way of doing things,” he said. “I’m not worried about it.”

The Kaine aide called the higher amount for Virginia-class submarines in the House bill “good” and said Kaine will advocate for it.

The issue is of concern to southeastern Virginia, which is home to one of only two shipyards in the country — Huntington Ingalls Industries’ Newport News Shipyard and General Dynamics Electric Boat in Connecticut — that build nuclear-powered submarines.

“It’s good for Virginia, it’s good for the Hampton Roads economy, but I think even more important is that it is critically important for our nation’s military,” Wittman said. “We’re blessed to have the best shipbuilders in the world right there in Newport News.”

The U.S. Navy has a contract to build nine submarines and an optional 10th between 2019 and 2023, and building only one Virginia-class sub next year would comply with contractual obligations, according to USNI News.

But doing so could destabilize the shipbuilding industry and compromise military readiness, according to a letter Kaine, Virginia Sen. Mark Warner, a Democrat, and 15 other Democratic and Republican senators sent in February to Thomas Modly, then acting secretary of the Navy.

The potential savings from building just one of the ships next year won’t justify the loss to seapower capacity in the face of looming fleet reductions, they argued. That’s particularly true in light of significant investments by Russia and China in their respective fleets, they said.

Clark said Virginia’s shipbuilding industry could see a loss of productivity and efficiency but not necessarily mass layoffs if Congress approves advance procurement money but not full, up-front funding for two Virginia-class submarines. In that case, the biggest impact could be on local suppliers, which could suffer a dip from delayed purchases of smaller parts, he said.

Wittman called the two-per-year annual build rate of the Virginia-class submarines a “sweet spot” in terms of efficiency and production capacity and said the pace would enable the military to replace aging submarines that will be retired in coming years.

Most of the state’s federal lawmakers backed the House NDAA. Seven Virginia Democrats and two Republicans voted for it while one — GOP Rep. Ben Cline — opposed it. Republican Rep. Morgan Griffith didn’t vote.

Rep. Elaine Luria, a Virginia Beach Democrat and former naval officer who sits on the House Armed Services Committee, praised the House bill in a statement, saying it positions the state’s coastal region to “continue to secure our critical role in securing America.”

In a recent interview with the Mercury, Kaine noted that Newport News Shipyard is slated to do a “big chunk” of work on the Columbia-class submarine, which he said would be “really, really good” for Virginia.

The battle over the nation’s sea power capacity has been overshadowed by higher-profile issues in the defense policy bill, such as whether to rename military facilities that honor Confederates.

The White House threatened to veto the bill last week, in part over the renaming language.

Virginia is home to three military bases named for Confederate generals — more than any other state in the country. They are Fort Lee, an Army base south of Richmond; Fort A.P. Hill, a military training site north of Richmond; and Fort Pickett, a site near Blackstone.

Both House and Senate versions of the NDAA include the renaming language and passed with veto-proof majorities. Armed Services Committee Chair James Inhofe (R-Okla.) has pledged to remove the provision before the bill is passed, according to Politico.

The legislation, which authorizes funding for the U.S. Department of Defense and other national security programs through fiscal 2021, has passed 59 years in a row. Some lawmakers — including Senate Majority Leader Mitch McConnell (R-Ky.) — have urged Trump to reconsider his threat to veto the “must-pass” bill, which authorizes spending for the nation’s military and would raise pay for troops in an election year.

Wittman brushed off the veto threat, noting that the administration’s statement on the matter doesn’t specifically object to funding for a second submarine. “I’m not concerned about it at this point,” he said.

The Senate NDAA also authorizes funding for ship maintenance and operations support and help for submarine and surface ship suppliers, funds military construction projects in Virginia and across the country and has “quality of life” provisions in areas related to child care, employment for military spouses and pandemic-related funding, according to Kaine’s office.

The House NDAA also includes funding to address the pandemic, support military infrastructure projects and enhance military “quality of life,” such as through job-placement programs for unemployment guardsmen or reservists, according to Wittman’s office.

It would also require the secretary of the Navy to report on ship maintenance and repair, a provision Luria backed.

“As a twenty-year Navy veteran, I know firsthand that ship maintenance is the backbone of naval readiness,” she said in a statement, noting that the provision will increase transparency on an issue of concern in Hampton Roads, which she said leads the nation in naval ship repair.

CORRECTION: This article has been updated to correct the characterization of the move by Senate Republicans to replenish money in military construction accounts that had been diverted for a border wall.