What’s in a pledge: Joe Morrissey spins on utility contribution

“I lead by what I think is right.”

“Just give me the facts.”

Throughout 2019, then-candidate Joe Morrissey opened his daily radio show with these two pronouncements of principle. But now it’s 2020, candidate Morrissey is Senator Morrissey, and it seems he’s got a new idea about what is right – and about the facts – when it comes to taking money from Dominion Energy.

So when Morrissey made it clear he was challenging then-Senator Rosalyn Dance in the Democratic primary last year, we reached out and asked him to pledge never to accept contributions from Dominion Energy or Appalachian Power. He took the pledge.

But he didn’t just take the pledge. He made his critique of Dominion Energy and the (now defunct) Navy Hill development project – led by Dominion CEO Tom Farrell – a central theme of his campaign. In fact, Morrissey elevated the Dominion issue in his campaign more than almost any other signatory of our pledge.

Fast forward to last week. As I perused the most recent campaign finance reports from Virginia politicians, I noticed a $2,500 contribution from Dominion Energy to Morrissey’s campaign committee on January 6, 2020. This was a blatant violation of our pledge, even if Dominion CEO Tom Farrell’s $1,500 contribution to Morrissey on October 29, 2019 was not.

Last Thursday, I emailed Senator Morrissey to inform him that he’d broken his pledge and to ask him if he’d be willing to return the $2,500 to Dominion Energy. On Tuesday, Morrissey replied with a letter in which he simultaneously defends taking Dominion’s money and argues he did not violate our pledge.

Morrissey states: “I disagree that I did not follow through with the pledge I signed with Activate Virginia. Indeed, I pledged that I would not take campaign contributions from Dominion during the recent campaign cycle. This turned out to be true as I took absolutely no donations from public utilities (e.g. Dominion, Verizon, App. Electric Power) during the 2019 Democratic primary and General Election.”

The facts: the Activate Virginia pledge clearly states that the signatory pledges “never to accept campaign contributions from either Dominion or Appalachian Power.” No caveat about a specific campaign or campaign cycle – “never” means never. As you can see, when Morrissey emailed me on March 18, 2019 to sign the pledge, he did not indicate that he was limiting his pledge to the 2019 campaign cycle. 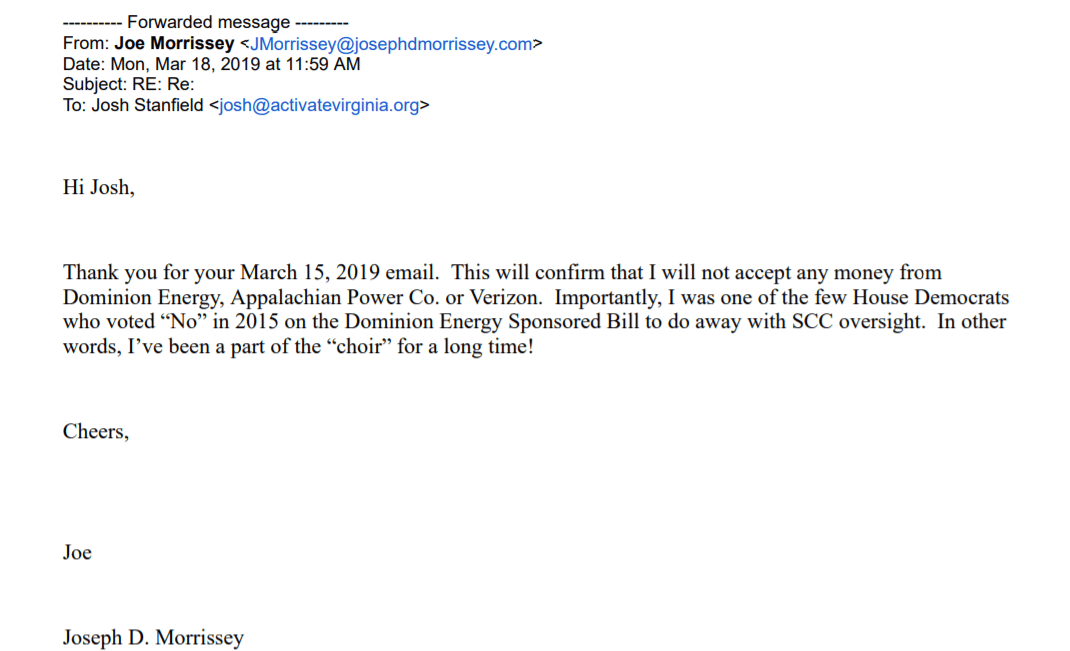 Morrissey also states in his letter that “nobody buys or controls Joe Morrissey.” Let’s get the facts straight from candidate Morrissey, when I called into his live radio show on January 10, 2019. He told me and his audience that, on the question of Dominion campaign contributions:

“I know what legislators say – well they don’t buy my vote. You know what, they buy access.”

On that same show, candidate Morrissey took a principled stand:

“We should not have candidates or incumbent legislators accepting these funds knowing that those folk are coming before the General Assembly year-in and year-out to be regulated.”

On that same show, when I asked him if he’d “take money from Dominion or Appalachian Power in the future,” candidate Morrissey responded tersely: “No chance. Not gonna happen.”

And on that same show, candidate Morrissey challenged Attorney General Mark Herring, who had recently announced he would no longer accept Dominion contributions:

“Herring said I’m not gonna take it but you know what I think, Josh? He’s already taken $137,000 dollars – how about give that money back?”

That was candidate Morrissey in his own words. A year later, perhaps dizzy from a 180-degree spin – or from flipping through the Saslaw-McAuliffe rolodex – Senator Morrissey accepts Dominion money and apparently won’t give it back.

We shouldn’t be surprised. Not because he’s Joe Morrissey. But because he’s a politician. The whole point of the pledge was to instigate a culture change within the political class, to apply pressure on politicians who ignore Virginia’s corrupt campaign finance system and to demonstrate that the legislative will to change actually exists.

As Senator Morrissey demonstrates, politicians will almost always put money, power and political self-interest above principle. It’s therefore imperative – as candidate Morrissey suggested on that same 2019 radio show – that we pass legislation to prevent lawmakers from accepting contributions from public utilities that they regulate.

Otherwise another legislator may pull a “Joe Morrissey,” collapsing back into Dominion’s cold, yet oh-so-cushy embrace.

Josh Stanfield is executive director of Activate Virginia, a Democratic advocacy group and the originator of a pledge to refuse campaign contributions from Dominion Energy and Appalachian Power Company. He lives in Yorktown.

What’s in a pledge: Joe Morrissey spins on utility contribution