What will restore trust between police departments and the communities they serve, particularly with people of color? A local law enforcement executive in Virginia – thrust into the spotlight since the slaying of George Floyd by officers in Minneapolis – has some ideas.

“A real quick fix will be banning chokeholds,” Norfolk Police Chief Larry Boone told me in a lengthy interview at his downtown headquarters.

Recruiting people who have a “guardian” mentality, instead of that of a warrior, is another. That means changing the police culture.

And though it could take a while: ensuring that every police officer around the country has standardized training, he added.

State officials would be smart to listen to Boone, one of a few dozen African American police chiefs among the several hundred law-enforcement agencies in the commonwealth. He’s been appointed to advisory panels in Virginia, has the ear of Gov. Ralph Northam, and has gained credibility around Norfolk because of his outreach to community groups.

There also was Boone’s comportment during one of the early protest marches in Norfolk after Floyd’s killing. He answered dozens of questions from demonstrators, some while using a bullhorn. He also marched with the hundreds there that day – though a few bristled at his appearance.

Boone had heard on the police radio a report that some demonstrators wanted to attack the station where they’d gathered. He had visions of the Minneapolis police station that burned during protests, and the chief wanted to ensure it didn’t happen in his city.

That’s why Boone made himself visible and defused tension. Lots of police supervisors might not feel as comfortable in a similar situation.

“It wasn’t planned,” he told me, saying he ordered his police officers to stand down. Some protesters were unconvinced by his answers to the crowd, but many appreciated his presence.

Several days after that Norfolk march, Northam appointed Boone to the State Crime Commission. The panel makes recommendations on public safety policy, and Northam said Boone, chief since late 2016, would bring an “important perspective” to discussions about changing the criminal justice system in Virginia.

Northam also praised Boone for taking part in the Norfolk march with protesters. “He’s a reformer,” the governor said.

Boone sits on the state’s African American Advisory Board, too. It was created in 2019 after the scandal broke involving a racist photo on the governor’s 1984 medical school yearbook page.

The chief told me he’s already made recommendations to the Governor’s Office on police reform.

Boone is quick to point out that his department has credibility in Norfolk because of its wide-ranging outreach. He notes that Norfolk police officers operate more than 20 community programs, including a “Guns Down Movement” to try to stem firearms violence – particularly among young adult African American males.

Overall, the programs encompass age 5 to senior citizens, with some focusing on getting to know police officers, while others delve into understanding police procedure and getting a foothold in law enforcement careers. Among the recent initiatives is a Hispanic Citizens Police Academy.

Yet a lot of the focus remains on Boone, who joined the Norfolk police in 1989 and rose through the ranks after serving in canine, gang suppression, patrol and other units. He proudly notes that he’s made more than 1,300 arrests during his career yet has been the subject of perhaps only four citizen complaints.

His style includes giving out his personal phone number to people who want to contact him at a moment’s notice.

“I’ll meet with anybody,” Boone said.

The Virginian-Pilot has reported the chief supports creating a civilian review board that would oversee the department. That oversight could have a range of authority and might be less independent than citizens demand.

Anything that would improve the police-community relationship, though, is a plus.

“Currently, there’s just a perception of police (nationwide) not in the best light,” he told me, particularly in the African American communities. “There are opportunities to fix it. If we don’t fix it now, we’ll never get it right.” 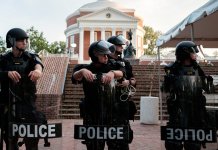 Another type of front-line: There’s an urgent need for funding for children’s mental health