‘I’ve been wanting to see this all my life.’ Celebration in Richmond as Confederate memorials come down.

A statue of Confederate Gen. Stonewall Jackson is removed from its pedestal in Richmond on Wednesday. (Ned Oliver/Virginia Mercury)

David Randolph grew up impoverished in Charlotte County just a mile from the plantation where his great grandparents were enslaved. Today he and his son work together as doctors — both radiation oncologists — at Johnston-Willis Medical Center in Chesterfield.

And that’s where he was when he got a call from a friend early Wednesday afternoon letting him know that crews in Richmond were about to take down a statue of Confederate Gen. Thomas “Stonewall” Jackson.

“I told my son, ‘You got the office. I want to see this, because I’ve been wanting to see this all my life,’” he said, straddling his road bike and still wearing scrubs as workers from a Connecticut-based crane company strapped rigging around the chest of the massive bronze horse upon which Jackson has sat for more than a century.

The unannounced plan to begin removing the statue and three other Confederate memorials along the city’s Monument Avenue drew a crowd in the thousands to celebrate. The moment — marked by cheering, thunderclaps and a hard rain — did not disappoint.

“I’m overjoyed,” Randolph said, recalling his sophomore year at VCU when someone scrawled a racist slur on the door to his dorm room. “This guy here, if he had heard somebody call me a n—–, he wouldn’t have cared. He would have thought they were right. He was all in favor of that. He was fighting to keep that. So I’m glad he’s coming down. I can’t wait until they all come down.”

For years, the statues presented as untouchable. And when people did challenge them – most often with paint and graffiti, the city saw to it that they were immediately repaired and restored.

The dynamic changed fast amid widespread protests following the death of George Floyd in Minneapolis. There are five Confederate statues on Monument Avenue — one, a six-story homage to Gen. Robert E. Lee is owned by the state and four, including Jackson, are owned by the city. Leaders promised last month they would begin the process to remove all of them, but protesters made clear they would not wait.

First the statues’ pedestals were blanketed in graffiti. Then protesters began pulling them down. A statue of Jefferson Davis went head first into the pavement on June 10. Protesters also pulled down two less prominent memorials in city parks.

Richmond Mayor Levar Stoney decided Wednesday he would not wait for the City Council to follow a two-month long process to remove the statues laid out in new legislation passed by new Democratic majorities earlier this year that for the first time allowed local governments to remove Confederate war memorials on public land.

Following the lead of Norfolk and Farmville, he said the possibility that protesters would try to remove the massive memorials on their own represented a public safety threat that required immediate action. “As the COVID-19 pandemic continues to surge, and protestors attempt to take down Confederate statues themselves, or confront others who are doing so, the risk grows for serious illness, injury, or death,” he said in a statement. “We have an urgent need to protect the public.” 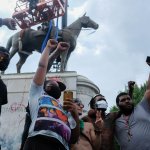 A crowd grew as workers spent about four hours rigging and preparing a statue of Confederate Gen. Stonewall Jackson for removal from Monument Avenue in Richmond this summer. (Ned Oliver/Virginia Mercury) 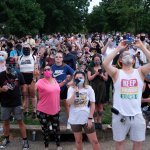 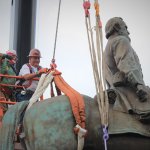 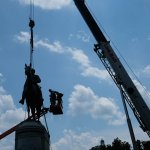 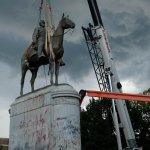 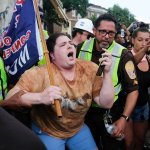 The mood around the statue was overwhelmingly celebratory except for the brief appearance of a man who begged crews to stop their work before throwing himself at its base and crying. (Sarah Vogelsong/Virginia Mercury) 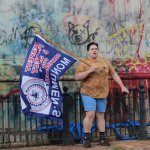 The mood around the statue was overwhelmingly celebratory except for the brief appearance of a man who begged crews to stop their work before throwing himself at its base and crying. (Sarah Vogelsong/Virginia Mercury)

Before the rigging crew got to work, Stoney asked the Richmond City Council to take a vote in support of his decision to remove the statues early. But the virtual meeting quickly devolved into confusion and council members decided to hold off, citing procedural concerns around the lack of public notice for the resolution Stoney wanted them to pass.

Several council members also questioned whether the mayor’s plan was legal. “When we start ignoring laws we don’t like we set a very dangerous precedent,” said Councilwoman Kim Gray, who is running against Stoney in this fall’s mayoral race, noting that she favored finding a legal means of expediting the removal process.

Interim City Attorney Haskel C. Brown III told the council in no uncertain terms that Stoney’s emergency authority does not empower him to start taking down statues immediately, despite similar actions in other jurisdictions. “Obviously any action to do that incurs legal risk on the part of the people who would be moving the statues,” Brown said. “That is my advice. That continues to be my advice.”

Stoney was undeterred and a little over an hour later crews were on the scene beginning their work.

A crowd quickly formed, growing to the thousands by the time the statue was lifted off its pedestal amid a hard rain shortly after 4:30 p.m. With the exception of a single counter protester who ran toward the base of the pedestal crying, the atmosphere was overwhelming celebratory.

“Just a sense of awe, of history,” said Councilman Mike Jones as he looked up at the statue. “I’m glad the mayor has taken this step. I told him if he did it, I’d stand with him, because it’s the right thing to do.”

Nearby, Matthew Pearson sat with his wife and four-year-old daughter. The family lives in the neighborhood and when Pearson saw what was happening, he said he had to stop and watch. Pearson said he appreciated the symbolism and wanted his daughter to be there for a moment he views as historic. But like many attendees, he said he viewed the city’s reckoning with Confederate memorials as the beginning of a discussion, not the end.

“The statue is symbolic of a larger issue,” he said, “and I’m just hopeful that going forward we’ll be able to continue to make progress on — not only pulling down statues that are symbolic of things — but providing real long-term solutions for certain systematic issues that have been going on for hundreds of years.”

‘I’ve been wanting to see this all my life.’ Celebration in Richmond as Confederate memorials come down.

Oppression in the kitchen, delight in the dining… by Guest Column December 25, 2020
Virginia's naturopathic doctors are continuing a… by Kate Masters January 5, 2021
With Confederates vanquished, what’s next for… by Ned Oliver September 8, 2021