Thanks to a less rainy spring, the Chesapeake Bay’s “dead zone” is likely to be slightly smaller this summer than normal, though it will still be bigger than long-term targets for the nation’s largest estuary, scientists announced Wednesday.

Ecologically, a dead zone is part of a body of water that is unable to sustain plant or animal life due to a lack of oxygen, a condition known as hypoxia.

The phenomenon is the result of years of excess nutrients, particularly nitrogen, flowing into waters from agricultural fields, wastewater sites and urban and suburban areas. These nutrients fuel enormous growths of algae that eventually die and decompose, depleting the waters of oxygen.

While the biggest dead zone in the U.S. is found in the Gulf of Mexico, the Chesapeake Bay has also long suffered from hypoxia, giving rise to the emergence of a dead zone.

Researchers at the Virginia Institute of Marine Science have found that the Chesapeake’s dead zone, which appears along its main-stem in the summer, covers about 40 percent of the bay’s area and as much as 5 percent of its volume.

This year, scientists anticipate the dead zone will be 9 percent smaller than normal.

That decline is due to not only less rainfall this spring but also less runoff carrying nutrients within the watershed as a result of long-term reduction plans colloquially called “pollution diets” enacted by bay states such as Virginia.

Nitrogen pollution this spring, as measured at nine river monitoring stations, was 17 percent below the long-term average.

While Lisa Feldt, vice president for environmental protection and restoration with the Chesapeake Bay Foundation, said in a statement that “the good news is that dead zones are shrinking over time,” she cautioned that “a prediction for a dead zone that is ‘slightly smaller than average’ is nothing to cheer.”

“If accurate, we will continue to see harmful algal blooms and underwater dead zones where crabs, fish, oysters, and other marine life can’t survive,” she said.

Many Virginia watermen are already struggling this year as a result of market disruptions due to the COVID-19 pandemic.

The forecasts come amid pending litigation by Virginia, Maryland and the District of Columbia against the U.S. Environmental Protection Agency over what the states say is that agency’s failure to enforce pollution reduction targets for New York and Pennsylvania.

The latter state, which disproportionately affects the Chesapeake’s water quality because of its upstream position, has long lagged behind the other bay states in its cleanup efforts.

One key measurement used by scientists to assess the extent of the problem is hypoxic volume, or the amount of water affected by hypoxia at a given time.

In the bay, the average total annual hypoxic volume — the sum of the hypoxic volumes that have occurred each day in a year — is 809 km3 days, said Chesapeake Bay Program Communications Director Rachel Felver.

For scale, the Virginia Institute for Marine Science estimates that 1 cubic kilometer holds roughly the same amount of water as 400,000 Olympic-size swimming pools. 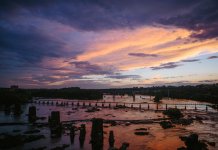 Clean air and clean water are more important now than ever