So the much-vaunted swans had been in the Venetian canals all this time, and the dolphins had never been there at all.

But not every bit of news you’ve heard about the positive environmental byproducts of the pandemic has been fake.

Case in point: air emissions. Whether carbon dioxide, nitrogen dioxide or ozone, many emissions that at certain concentrations are considered hazardous to human health and are therefore tracked and regulated by state and federal governments have seen noticeable declines since the pandemic was declared in mid-March.

The effect, said Jeremy Hoffman, chief scientist at the Science Museum of Virginia, has been akin to “a traumatizing geophysical experiment.”

“We saw it do something — in carbon emissions, in air quality, in people going to the park, in the city getting quieter, all of those things. When we do something, it can have an impact,” he said. “It’s just unfortunate that it had to be such a traumatizing experience for us to see that we can make a difference collectively.”

Scientists caution that at only two months into nationwide lockdowns, no one can say definitively what the effects have been on air quality — or public health related to air quality, like the incidence of respiratory illness.

“Everything is kind of nuanced,” said Daniel Goldberg, a research scientist with George Washington University’s Department of Environmental and Occupational Health who has been studying satellite data on nitrogen dioxide and particulate matter concentrations in the atmosphere. “I think it’s too early to make any firm conclusions.”

Car emissions are down — but truck emissions, not so much

In Virginia, the biggest emissions drops detected so far have been linked to transportation.

Produced by not only vehicles, but also power plants and large ships at sea, nitrogen dioxide can be emitted in concentrations significant enough to be detected by satellites. 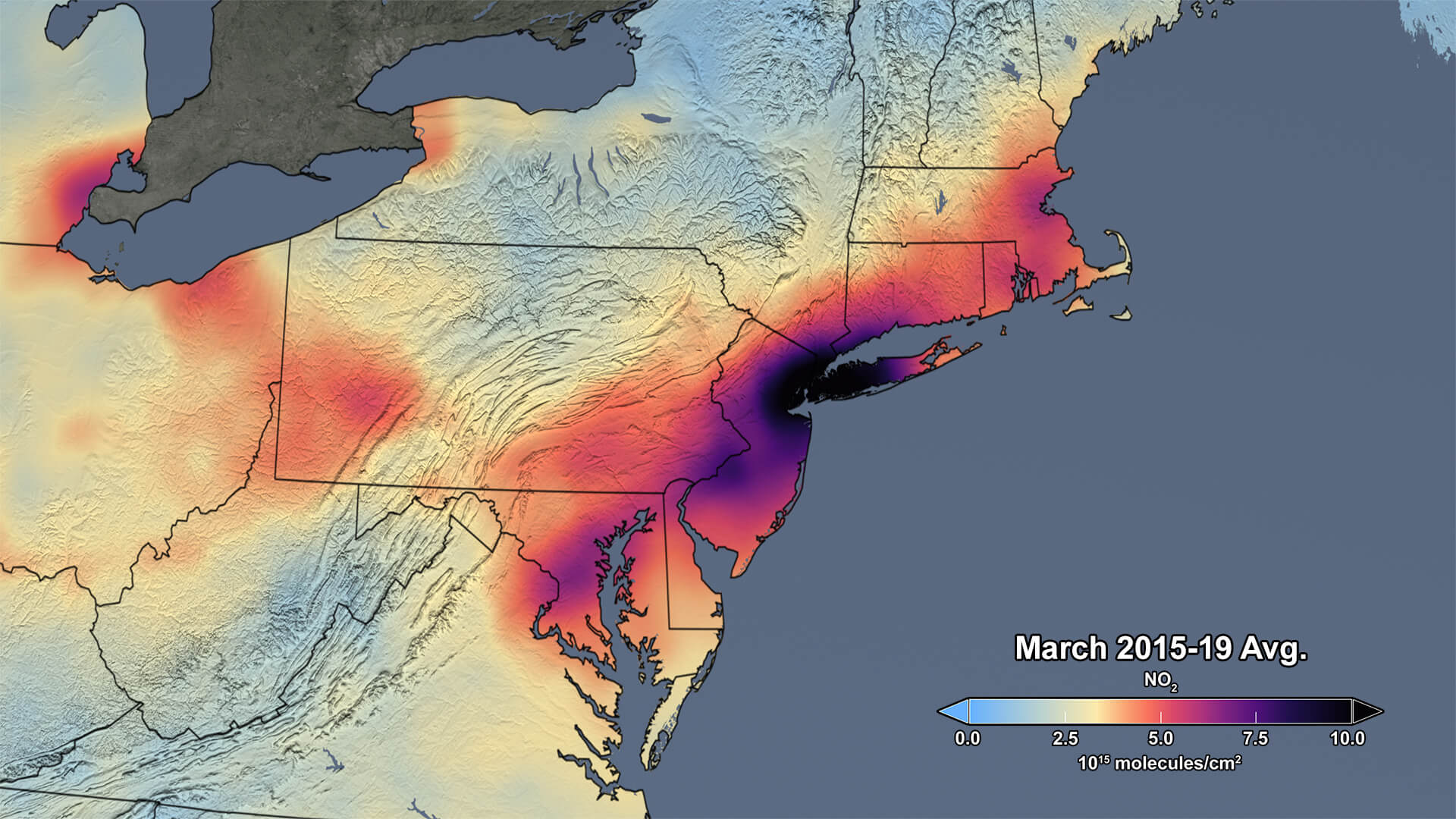 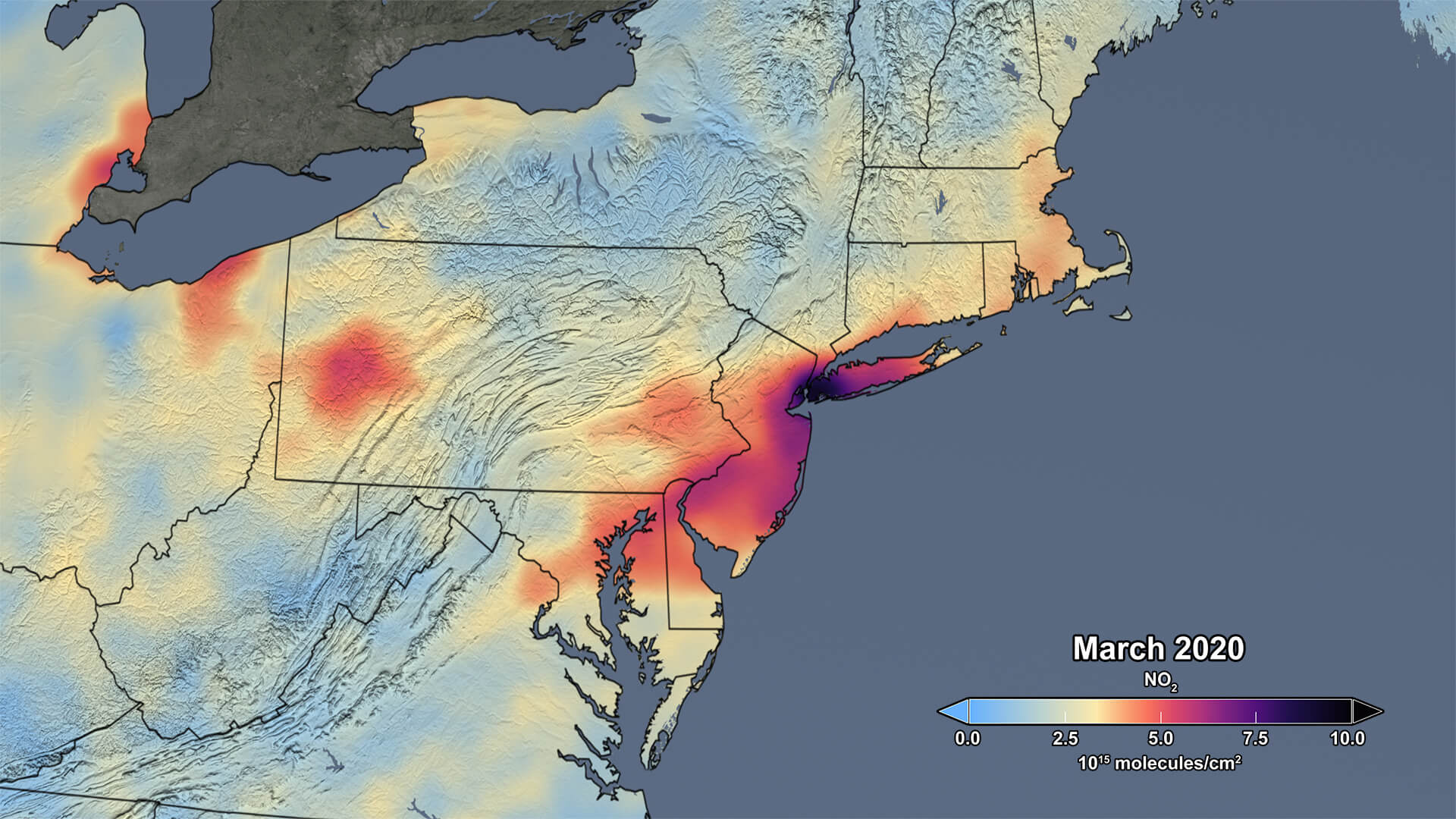 “We do know that cars are generally significantly dropping on the highways and the roadways. The evidence is suggesting the reduction is on the order of 50 percent” as of mid-April, said Goldberg.

That kind of drop, he said, would be expected to produce reductions in nitrogen dioxide emissions of about 15 percent — a prediction that so far seems to be in line with observations in the Washington, D.C. region, including Northern Virginia. There, emissions drops have been in the range of 15 to 20 percent, he noted.

The effect is by no means limited to NoVa, though. Virginia Department of Transportation data comparing statewide traffic volumes this spring to those from 2019 show stark drops in the number of vehicles on the commonwealth’s roads, ranging from a roughly 12 percent decline the week of March 16 to an astonishing 43 percent decrease the week of April 6.

Since then, traffic has started to tick upward, but it’s still well below normal levels: the week of May 4, the last full week reported, showed 34 percent less traffic on the roads than at the same time in 2019.

But most of those reductions so far seem to be cars, said both Goldberg and Dowd.

“When you look at (particulate matter), the PM numbers are about the same. Why is that? Diesel trucks,” said Dowd. There’s been “no indication that heavy-duty trucks have declined in traffic that much.”

Jenny O’Quinn, a communications manager for VDOT, confirmed that while traffic volume data collected from more than than 550 continuous count stations throughout the state has shown a 40 to 60 percent reduction in car traffic, the reduction in truck traffic has been “similar but less severe.”

If, like many Americans, you’ve been relying more heavily on delivery services like Amazon while most brick-and-mortar stores have been closed, you won’t need much of an explanation why.

“This is a very good experiment in testing what amount of emissions are really from cars and what are from other vehicles,” said Goldberg. “I think that’s the main thing a lot of people are going to be investigating in each city.”

The weather has also helped push down emissions of all kinds

No scientist denies the pandemic has had a major effect on emissions worldwide. But it’s not the only factor at play.

Weather, said Goldberg, is also key — and this spring, which in Virginia has been cool, rainy and frequently overcast, conditions have been pretty favorable to reducing air emissions.

“The conditions have just not been right to produce ozone,” he said. For that, ideal conditions are hot temperatures, stagnant winds and sunny skies, all of which have been in short supply in the commonwealth.

Ozone, however, is a complicated pollutant, he cautioned. Because there are so many components involved in producing it, one change in behavior doesn’t necessarily mean that overall concentrations will decline. States like California have continued to see poor air quality days due to ozone even during the pandemic.

Weather, though, also has a significant effect on air pollution by driving humans’ use of electricity and thereby leading to the consumption of more or less fossil fuels that produce carbon emissions.

“Traditionally, this is when demand is the lowest,” said Dowd. Moderate temperatures mean that few Virginians are using either heat or air conditioning, and longer days mean less reliance on electric illumination.

Power plant emissions are down, even taking weather into account

Transportation declines have been the most obvious reason behind emissions declines this spring.

But energy usage has also dipped dramatically, even taking into account changes in weather, according to Jeff Shields, the media relations manager for the PJM Interconnection power grid of which Virginia is a part.

“Since March 24, PJM has seen weekday peak (energy use) coming in about 10 percent — or about 9,000 (megawatts) — less than would be expected, with changes in weather accounted for,” he wrote in an email. And while total daily energy use has been impacted less, he added, it’s still dropped by about 7 to 8 percent during the same time.

Given Virginia’s continued reliance on natural gas, there’s little doubt that driving down energy use will decrease emissions. How much is the question, as is exactly what energy usage declines have occurred in Virginia, rather than the entire 14-jurisdiction PJM region.

Within Virginia, exact numbers will take some time, said Dowd. Large emitters either submit emissions measurements on a quarterly basis, meaning that data for the period of the pandemic’s largest impact won’t be sent to DEQ until the end of June, or else the agency requests it during inspections.

“At the moment we don’t have real-time emissions data,” said Dowd, although “we will get it in the fullness of time.”

The reductions are temporary, but they may pave the way for more permanent changes

The emissions decreases we’ve seen over the past two months aren’t likely to linger for long.

“It’s like we turned back the clock maybe 10 to 15 years on our emissions pattern,” said Hoffman. But, he warned, “it’s temporary.”

That’s particularly true when it comes to carbon. Despite a recent study by an international team of researchers that measured daily global carbon dioxide declines of 17 percent at the peak of the pandemic, carbon emissions for the year are expected to be only about 4 to 7 percent lower than 2019 levels.

“CO2 stays in our atmosphere much, much longer than NO2 … so this temporary reduction in CO2 is doing almost nothing to climate change over the time scale,” said Goldberg. “But short-term reductions in NO2 can definitely change air quality in the very near term.”

To Hoffman, the most apt analogy for the injection of carbon dioxide into the atmosphere is that of filling a bathtub with a fire hose. You can turn the hose off briefly, but the bathtub will still stay full.

“Global temperatures don’t care about a year-to-year variation,” he said. “It’s the fact the fire hose has been on for 150 years.”

Still, the unprecedented times have given scientists unprecedented opportunities to test their models and gather data for new ones that can be used by policymakers grappling with how to help their societies adapt to climate change.

Among other aims, said Dowd, researchers will need to figure out how to incorporate low numbers recorded during the pandemic into models that calculate emissions limits for programs like the Regional Greenhouse Gas Initiative, which Virginia will join Jan. 1, and the Transportation Climate Initiative, which Gov. Ralph Northam’s administration has expressed interest in joining.

And as data roll in, they may also offer insight into more local questions, shaping governments’ decision-making on issues such as transportation.

“The goal is for these to not be temporary,” said Goldberg. “That’s really what turns this from a cool experiment to something that’s helpful for society overall.”

Across cultural lines, home schooling has boomed since… by Jeff South January 3, 2022
Can Southwest Virginia remake itself as a laboratory for… by Sarah Vogelsong September 20, 2021
Researchers eye coal ash as a possible source of critical… by Sarah Vogelsong July 7, 2021