Sen. Richard Burr (R-N.C.) is resigning as the committee’s chairman after federal agents seized his cellphone Wednesday as part of an insider trading probe.

“Senator Burr contacted me this morning to inform me of his decision to step aside as Chairman of the Intelligence Committee during the pendency of the investigation,” McConnell said in a statement. “We agreed that this decision would be in the best interests of the committee and will be effective at the end of the day tomorrow.”

The Los Angeles Times reported that agents had seized Burr’s cellphone Wednesday as part of a Justice Department investigation into stock sales he made ahead of the market drop caused by the COVID-19 pandemic.

Burr has faced a backlash from Democrats and Republicans alike since the allegations of insider trading surfaced. Critics allege that the North Carolina senator broke the law by using nonpublic information about the threat posed by the virus when he dumped up to $1.7 million of stocks in February.

Florida Republican Rep. Matt Gaetz previously slammed the North Carolina senator for remaining the intelligence chairman “after screwing all Americans by falsely reassuring us” with op-eds on COVID-19 “while he dumped his stock portfolio early.”

Burr’s spokeswoman did not immediately respond to a request for comment for this story.

It’s not yet certain who would replace Burr as chairman on the committee. Sen. Jim Risch of Idaho is the next Republican in terms of seniority, but he is chairman of the Senate Foreign Relations Committee.

Florida Republican Sen. Marco Rubio is the next Republican in line. Rubio appeared surprised when asked about Burr’s decision on Thursday. He quipped to reporters: “I wish they would time these things better,” The Hill reported.

Rubio’s spokesman Nick Iacovella declined to comment Thursday on whether Rubio is interested in leading the committee or has been asked to do so.

Rubio told the Miami Herald, “I’ll do whatever they ask, but it’s not up to me.”

Dennis DeConcini, a former Arizona Democratic senator who served as chairman of the Senate Intelligence Committee, said he “never heard anything like that before,” regarding the seizure of Burr’s phone. Asked how serious the situation is for the North Carolina senator, DeConcini said: “One to 10? Ten.”

Craig Holman, a lobbyist for the watchdog group Public Citizen, said Burr’s resignation as chairman, “is rooted in political opportunism. Burr faces very serious allegations of self-dealing insider trading during the pandemic, which reflects very poorly not just on Burr himself but also the political party in which he has a leadership position.”

Critics stepped up their calls for Burr’s resignation from the Senate on Thursday.

“Senator Richard Burr’s announcement is a blatant admission of guilt. He used privileged information to personally profit and is only acting now because he got caught. His actions today are still a day late and a million dollars short; he has lost the trust and confidence of his constituents and as a result, is incapable of serving in public office.” 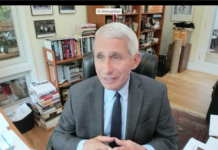 Kaine to Fauci: ‘The death rate … is unacceptable, isn’t it?’