As Gov. Ralph Northam prepares to gradually reopen parts of Virginia on Friday, a new health metric has emerged as a key factor in his decision-making. While the state has seen a growth in total COVID-19 cases as testing increases, Northam said he’s looking more closely at what the state is calling “percent positivity”— the percentage of total tests that return positive.

The metric has only recently surfaced as an important marker in the coronavirus pandemic, driven by recommendations from the World Health Organization and Centers for Disease Control and Prevention. And, as case numbers continue to rise in Virginia, health experts say it’s also important to look at other data points to determine how effectively the state’s distancing guidelines are slowing the spread of disease.

For one, test results are often reported several days after patients develop symptoms, making them less useful in tracking the development of disease in real time. A rise in case numbers is also the expected result of more tests being performed. That can be a good thing, experts say — indicating that the state is doing a better job of picking up infections.

For Northam, the decision to launch the first phase of his reopening plan was at least partially informed by a 14-day decline in Virginia’s percent positivity rate. While the metric can be a good data point to consider, experts say there are also drawbacks to relying on it too heavily. Here’s what Virginia’s positive-test rate can tell us about the status of coronavirus in the state.

What is percent positivity and what does it measure?

On the surface, percent positivity is fairly straightforward, said Dr. William Petri, an infectious disease specialist at the University of Virginia.

“That’s the easiest part of the equation,” he continued. “It’s just the number of tests that have been performed versus the percent that come back positive.”

How it’s interpreted is a little more complicated. Percent positivity is often used to gauge the amount of testing being conducted in a particular area and who’s being screened. “It’s telling you who’s got the biggest testing game in town,” said Dr. Barry Bloom, a professor and global health expert at the Harvard T.H. Chan School of Public Health.

That’s because as the total number of tests goes up, the percent of positive tests typically goes down relative to the overall number. Both Bloom and Petri pointed to South Korea, a country that’s become internationally renowned for its rapid deployment of tests to a large segment of its population.

In South Korea, the percentage of positive tests is roughly 3 percent, Petri said — compared to about 13.2 percent at commercial and public health laboratories in the United States, according to the Centers for Disease Control and Prevention.

Many public health experts, including officials at WHO, have said to aim for a positivity rate of 10 percent or even lower to ensure testing is capturing most — and ideally all — COVID-19 infections in the community.

In Virginia, an average of 14 percent of tests come back with positive results, according to data from the Virginia Department of Health. That rate has gradually decreased from a high of 22 percent in mid-April — meeting Northam’s goal of a 14-day decline.

But Dr. Hongjie Liu, chair of the department of epidemiology and biostatistics at the University of Maryland, said a 14 percent positivity rate is still less than ideal, especially during a global pandemic.

“To me, even 10 percent [positivity] indicates an ongoing epidemic,” he said. “Meaning the epidemic is spreading relatively fast. And 10 percent is not a small number. It’s a huge number in any epidemic.”

That’s because percent positivity can also be used to assess the scale of disease. And a rate of 14 percent indicates there are still a high number of cases in Virginia, both with and without symptoms, Liu said.

“[It] implies that the risk for other people to acquire the virus is high,” he wrote in a follow-up email.

“Unless rigorous prevention measures are implemented, this percentage may facilitate the further spread of COVID-19,” he added.

Other factors to consider

Another complicating factor is who’s being tested. Experts say high positivity rates also indicate that most tests are being conducted among people who are already at high risk for the disease, including symptomatic patients and close contacts of known cases. That makes it more likely that people with mild symptoms — or no symptoms at all — are going undercounted.

But those people can make up a significant portion of coronavirus cases. When health officials finally tested every resident at Canterbury Rehabilitation & Healthcare Center, a Henrico nursing home with one of the worst COVID-19 outbreaks in Virginia, they found that more than half showed no signs of the disease.

For weeks, Virginia’s strict guidelines reserved tests for the most vulnerable residents, including hospitalized patients and residents in long-term care facilities with symptoms. Even now, the state’s guidance prioritizes high-risk groups over people with symptoms or asymptomatic residents tapped for testing based on a doctor’s judgement.

While a declining positivity rate is a good indicator that testing is increasing, Bloom said it still doesn’t give much insight into infections among the overall population — a factor that’s important to consider when easing social distancing restrictions.

“What we don’t know is how many people are walking around, have the infection, and are able to transmit it but are perfectly healthy,” he said. That’s important in the case of COVID-19, which can spread through asymptomatic patients or those who haven’t begun to show signs of the disease.

Bloom pointed to the Biogen leadership conference in Boston, where a small group of executives unwittingly spread COVID-19 between themselves and — later — to contacts in Massachusetts and at least five other states.

“Within a month, 99 people sitting in that room all were infected with COVID from two putatively healthy people,” Bloom said. “And then there was an explosion, because those 99 people went all over Boston and nobody knew they were sick.”

Northam’s Phase One reopening plan maintains many of the restrictions of his initial shutdown, including a ban on gatherings of 10 people. Gyms, theaters and indoor dining spaces will remain closed. But other spaces are permitted to reopen at reduced capacity, including hair salons and churches.

Experts told the Mercury that expanded detection will be a key way to reduce the risk of new transmissions once businesses reopen. Petri said it’s an encouraging sign that the positivity rate is declining as testing increases, and that Northam has set a goal of testing 10,000 people per day.

But so far, Virginia isn’t meeting that objective. On Wednesday, the state recorded 8,845 results — some of the highest numbers to date. Two days earlier, the state tested 3,373 people.

Without a continued growth in testing to fully capture the number of infections, Petri said it’s difficult to say whether the state will be able to reopen without another spike in cases.

“I think it’s too early to tell because we’re not at the level that the governor has set,” he added. “And 15 percent [positivity rate] isn’t 10 percent. So, I don’t think we’ve achieved that goal yet, of going from where we are to where we need to be.”

Where to go from here

Both Liu and Bloom also said that testing isn’t inherently useful without the resources to follow up on the results.

Many of the countries that most effectively curbed the spread of disease, including South Korea, coupled widespread testing with strict isolation measures. In South Korea, that meant tracing possible contacts of known infections with high-tech mapping and instructing them to quarantine at home.

Without a vaccine for COVID-19, Bloom said testing, contact tracing and isolation is one of the only ways to prevent new transmissions.

State officials say Virginia is still in the process of ramping up its contact tracing program. VDH is currently in the process of hiring 1,000 new contact tracers, which — combined with the existing workforce at local health departments — will amount to roughly 15 tracers for every 100,000 residents, Health Commissioner Dr. Norman Oliver said at a news conference on Wednesday.

Northam said VDH has received more than 3,000 resumes. At an earlier press conference, Health Secretary Dr. Daniel Carey said the state would continue to build its tracing workforce into the summer.

Testing the contacts of confirmed cases is also important. Oliver said Wednesday that the state will test symptomatic contacts of known cases, though it’s still unclear whether asymptomatic contacts will also be offered tests. Dr. Laurie Forlano, VDH’s deputy commissioner of population health, later said “that level of detail still needs to be fleshed out.”

Primary contacts of known cases — which Oliver defined as anyone who spent extended time less than six feet away from them — will be asked to self-quarantine for 14 days. But it’s still unclear whether other contacts will be warned of their potential exposure. Bloom pointed out that identifying and reaching out to contacts also becomes more difficult as case numbers increase, which is another important reason why states are concerned about a second surge.

“When you have 25,000 cases, you simply can’t track down every contact,” he said. “It’s a matter of resources and how to track down vast numbers of people. And that can become very hard and very expensive.” 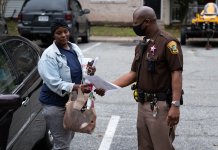