The party’s statement referenced Trump’s recent tweets about Virginia, Michigan and Minnesota, saying the president’s calls for liberation in those three states were directed at people “subjected to the tyrannical rule of incompetent liberal governors.”

Many of the critiques in the release seem more relevant to the shutdown debate in Michigan, which has imposed stricter social distancing rules.

The disconnect may have arisen because much of the language originated from a viral anti-shutdown social media post that has been circulating online for days and doesn’t appear to be tailored to Virginia’s actual policies. The state GOP version includes only slight modifications to the original, which has been shared widely by people acknowledging they copied and pasted the text from another source.

For example, the Facebook post begins: “When the State tells you it’s safe to go to Home Depot to buy a sponge but dangerous to go and buy a flower, it’s not about your health.”

The state GOP release says: “When the State tells you it’s safe to go to the store to buy a broom but too dangerous to go and buy a flower, it’s not about your health.”

The Facebook text continues: “When the State prevents you from buying cucumber seeds because it’s dangerous, but allows in person lottery ticket sales, it’s not about your health.”

The RPV release follows: “When the State prevents you from buying gardening supplies because it’s dangerous, but allows in person lottery ticket sales, it’s not about your health.” 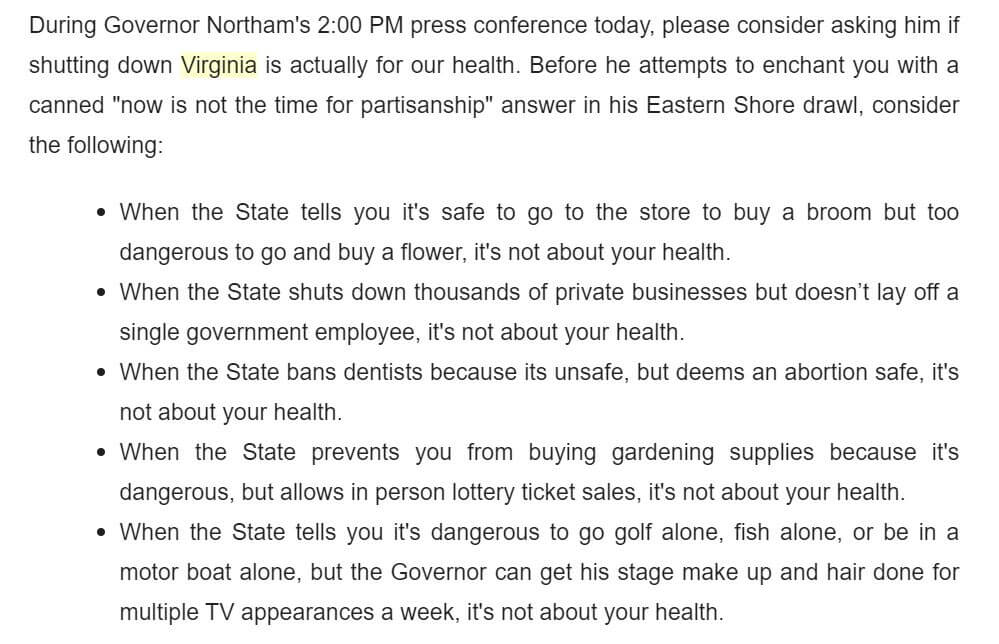 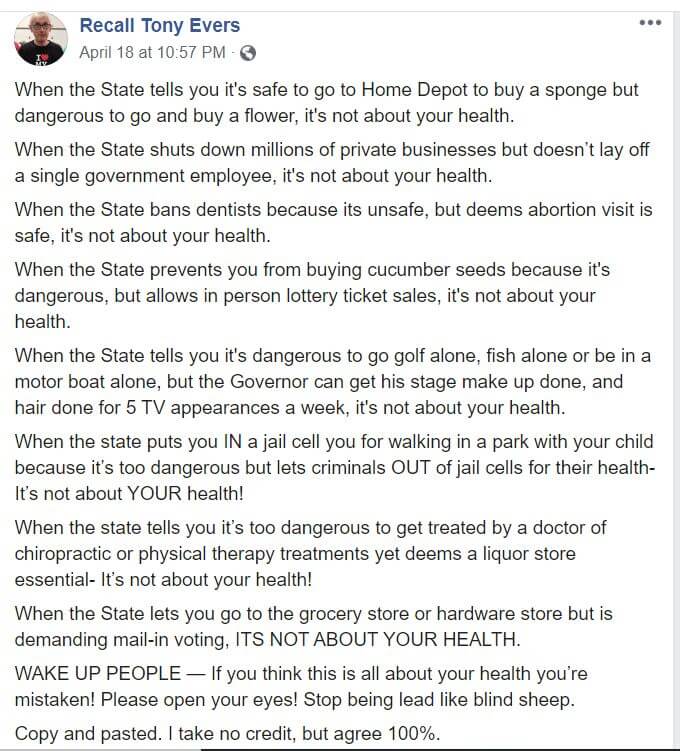 A version of the anti-shutdown post that appeared April 18 on a Facebook page opposing Wisconsin Gov. Tony Evers. The original source of the text is unclear.

It’s not clear who authored the original text.

Trump-supporting actor Kevin Sorbo, best known for his starring role in the 1990s-era TV series “Hercules: The Legendary Journeys” shared a version of it Sunday in a Twitter post retweeted more than 26,000 times. But it appeared to be circulating before the Sorbo bump.

When asked Monday evening if the text had come from the social media post, RPV spokesman John March initially said: “What difference does it make?”

He later acknowledged the text had come from the online post. He said someone sent it to him, but declined to identify his source.

“I think a lot of the points apply to all of the states,” March said. “There were three states that the president tweeted about.”

There is no ban on the sale of flowers in Virginia. Lawn and garden retailers are classified as essential businesses under Northam’s executive order, as are home improvement stores like Home Depot and Lowe’s.

The issue of whether florists and garden centers should be considered essential has been a point of contention in Michigan, which has a much stricter shutdown order than Virginia.

Another section of the Virginia GOP release suggested Northam allowed abortions to continue but banned dentists. The same portion of Northam’s executive order that allows “the full suite of family planning services” to continue also specifies that dentists, orthodontists and endodontists are allowed to perform “any procedure or surgery that if delayed or canceled would result in the patient’s condition worsening.”

The GOP release also suggests authorities have told residents “it’s dangerous to go golf alone, fish alone, or be in a motor boat alone.” That too appears more relevant to the specifics of Michigan’s shutdown, not Virginia’s.

Golf courses remain open in Virginia, and Northam made a specific exception to allow fishing on state beaches even though they’re closed for general recreation.

“Trump speaks and people listen,” tweeted U.S. Rep. Don Beyer, D-Alexandria. “We are in a really dangerous time and it is more important than ever that Virginians STAY HOME. Trump is going to get people killed.”

When asked about the GOP release at his media briefing Monday, Northam said the messages about liberating Virginia seem to encourage protests that pose public health risks.

“Whether it’s Republican, Democrat, this is not the time to play politics,” Northam said. “This is the time for all of us as a nation and certainly the Commonwealth of Virginia, to work together and be part of the solution. I would just encourage all Virginians right now to be part of the team.”

The White House’s own guidance says states need to have 14 days of declining new case totals before the first phase of easing restrictions can be implemented.

Republican General Assembly leaders have begun calling on Northam to come up with a plan to reopen the state to avoid further economic pain. But their messaging has been less aggressive than the state party’s.

“I don’t agree that there’s an ulterior motive behind the governor’s actions to date,” House Minority Leader Todd Gilbert, R-Shenandoah, said in a statement. “Everyone who has an opinion on this, including the governor and me, will be wrong at some point. I do think the governor has a responsibility to expand testing as rapidly as possible and to find creative and safe solutions to get people back to work.”

The state GOP seemed unswayed by any blowback for its release.

After the left-leaning website Talking Points Memo published a story on the release under the headline “Virginia GOP goes full Trump,” the party took to Twitter to respond.

“When the liberals get mad at you, you know you’re doing something right,” its post said.