Gov. Ralph Northam said Wednesday that he is recommending postponing the May 5 municipal elections to November and delaying the June 9 congressional primaries by two weeks to avoid having people vote in person during the coronavirus pandemic.

The typically low-turnout elections for local offices, which dozens of towns and cities throughout the state were scheduled to hold in less than a month, are expected to be rescheduled for November, coinciding with presidential and congressional contests. That plan will require General Assembly approval later this month.

Absentee voting was already underway for the May elections, and the local registrars who have had to find ways to safely accommodate mail and in-person voting have been anxiously awaiting additional guidance from state leaders. Local election officials had asked the state to cancel in-person voting for both May and June, citing safety risks to both voters and poll workers.

Anyone who has already voted absentee in the May elections will have to cast a ballot again in November in order to have their vote count, according to state officials.

“We are in the middle of a public health crisis. We have wrestled with our options and none of them are ideal or perfect,” Northam said. “Elections are the foundation of democracy and voting is a fundamental right But no one should have to choose between protecting their health or casting ballot.”

Northam can also use his executive power to delay elections for up to two weeks, and he will use that option to enact a shorter delay for the June 9 congressional primaries.

Those elections will be rescheduled to June 23, allowing a little more time for the crisis to pass and pushing those contests past the June 10 expiration date for Virginia’s stay-at-home order.

“Modeling right now suggests that by the end of June we should be able to pull off a primary and feel better about it,” said Northam Chief of Staff Clark Mercer.

The General Assembly could also revisit the timing for the June primaries depending how conditions look when they reconvene on April 22 to wrap up work on the state budget and bills Northam tries to change or veto.

The dramatic shift to May’s school board, town council, city council and mayoral races comes as governments across the nation grapple with the problem of how to conduct elections safely while adhering to social distancing rules and avoiding spreading the coronavirus through polling places.

Those difficulties were on full display Tuesday in Wisconsin’s Democratic presidential primary. A last-minute court battle ended with the state proceeding with its primary despite Gov. Tony Evers’ effort to suspend it, forcing many voters to choose between staying home for safety reasons or going out to exercise their right to vote.

Virginia held its presidential primary before the coronavirus disrupted normal routines, but policymakers have been trying to find a solution for the lower-profile contests coming up in the next few months.

The fix for the May elections is expected to be included in the so-called caboose budget, allowing it take effect immediately. The Northam administration has already discussed the proposal with Democratic legislative leaders and supporters believe the plan will win General Assembly approval.

“We’re all in this together, and we know that Covid-19 doesn’t care if you’re a Republican or Democrat, everyone is at risk,” said Democratic Party of Virginia Chairwoman Susan Swecker.

Some Republicans seemed more skeptical of the move to to delay the municipal elections for six months, which would allow incumbents in those races to serve slightly longer terms.

House of Delegates Minority Leader Todd Gilbert, R-Shenandoah, praised the two-week delay for the congressional primaries. But he said House Republicans are hoping for a “better solution” for the local elections. He raised the prospect of holding the local elections on June 23 along with the GOP’s statewide primary to pick a nominee to challenge U.S. Sen. Mark Warner, D-Va.

“Delay is prudent, but pushing these elections back by six months may be unnecessary if Virginia is able to hold elections safely on June 23,” Gilbert said.

“The governor is under intense pressure, but any proposal to suspend elections and discard already cast ballots should trouble all Virginians,” Suetterlein said in a written statement.

Northam’s office said its plan – crafted in conjunction with Attorney General Mark Herring – would allow “one ballot” in November’s general election. Rescheduling both upcoming elections for June 23 would create a different set of complications. Local general elections are technically nonpartisan, meaning candidates aren’t identified as Republicans or Democrats on the ballot. Congressional primaries are partisan by design, with voters requesting ballots for the political party they identify with.

State officials have already determined that anyone who wants to avoid going to the polls can cast an absentee ballot by mail using an excuse for illness or disability. The state requires voters to give a valid excuse to qualify for an absentee ballot, but Democratic lawmakers voted earlier this year to scrap that requirement for November’s election and allow 45 days of excuse-free early voting.

The new law is not scheduled to take effect until July 1, but some Democratic legislators are exploring ways to expand the concept to allow universal voting by mail, potentially allowing every registered voter to be mailed an absentee ballot whether they requested one or not.

With absentee voting for the congressional primaries set to begin in a few weeks, universal vote-by-mail may not be an option for June given the short timeframe to overhaul the process.

Though many Virginians will likely take advantage of mail-in voting, loosening absentee voting rules didn’t address the question of whether polling places should be open to accommodate those who show up to vote in person.

The Voter Registrars Association of Virginia and the Virginia Electoral Board Association sent a letter to the state on March 23 asking for polling places to be shut down for the May and June elections.

The election officials tasked with registering voters, running polling places and counting votes had raised concerns about health risks to both the general public and poll workers, many of whom are older adults put at higher risk by the virus that causes COVID-19.

“We have reports of officers of election and even Electoral Board members who have declared they will not serve in June for fear of bringing the virus back to their families,” Goochland County Electoral Board Member Robin Lind said in an email this week. “Many polling places are in facilities that have been closed; some have withdrawn permission to use the facility.”

Registrars have also raised questions about whether they will be able to acquire stockpiles of personal protective equipment like masks and wipes, which are in short supply everywhere.

As they waited for direction from the state, some registrars with May elections resorted to curbside absentee voting and asked voters to make appointments before coming in. With most local government agencies shut down, some election officials have started wearing masks and gloves as they go into their offices to proof ballots and process their growing volumes of mail.

“They weren’t prepared,” said Falls Church Registrar David Bjerke. “And yet they are doing it. They are getting it done.” 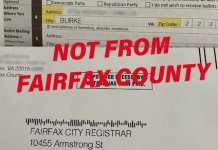 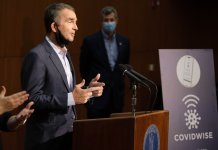