As confirmed COVID-19 cases rise rapidly, Virginians are hunkering down and stocking up on essentials should the government order a severe lockdown that shutters nearly all commerce.

Across Virginia, the state’s Alcoholic Beverage Control stores are seeing a significant jump in business, likely by people preparing for an extended period of home isolation, said Taylor Thornburg, a spokeswoman for the ABC. The agency holds a monopoly on distilled spirit sales in Virginia and state government thus far has deemed it an essential service and chosen to keep the stores open. But as confirmed coronavirus cases increase exponentially, there’s no guarantee that will remain the same.

That was on the mind of one shopper on Sunday who perused the bourbon aisle of a large suburban Richmond ABC store and added a bottle of Woodford Reserve to a basket he carried.

“The governor at any point could close all the stores. It’s happened in other states, even in the past 24 hours,” said Brennen Keene, an attorney who is practicing social distancing by working remotely from his Chesterfield home. “Look at what’s happening now in New York. It’s definitely going to get worse.”

Last week, ABC closed one store in Richmond for two weeks after the roommate of a store employee tested positive for the disease, Thornburg said. The ABC has also reduced hours for 24 stores on the Peninsula, including Williamsburg, Newport News and Hampton, to reduce exposure and protect staff, she said. The new hours are noon to 7 p.m.

“We will maintain store operations as long as it is safe to do so,” Thornburg said. “We will base our plans on the recommendations of the VDH (Virginia Department of Health) and the CDC (U.S. Centers for Disease Control and Prevention).”

Shoppers are doing more shopping online, she said. While home delivery or mail delivery is not possible, ordering ahead online minimizes the time customers are in the store because purchases are prepaid by credit card. At some stores, she said, employees can walk orders out for curbside pickup if customers call the store in advance and if there are sufficient staff on hand.

In a small central Virginia ABC store on Sunday, a clerk split his time between operating a cash register and using disinfectant wipes on commonly touched surfaces such as countertops, credit card readers, shopping carts and door handles. The clerk, who would not speak for attribution because he was not authorized to comment, said store employees have been vigilant over the past week or two about regular wipedowns — as much for their own protection as for the customers’.

At a western Henrico store, one employee disinfected counters, another worked the cash register and yet another hustled to keep shelves stocked with fast-selling Tito’s vodka. Tito’s, the state’s top-selling brand for the past three years, was flying off the shelves faster than any other label with some customers buying multiple bottles to see them through a possibly protracted home quarantine, a clerk said.

Figures on how much sales had increased weren’t available Sunday, Thornburg said. The ABC’s focus on changes to protect staff and customers has slowed the work of compiling and disseminating sales data, she said.

The western Henrico store was the last stop Elizabeth Mason of Henrico was making after stocking up on groceries. Her concern wasn’t so much that everything would be shut down, she said. She just tends to make few trips and buy enough to last a while on each trip.

“You can never be too careful,” she said as she walked toward her car with a bulging bag of liquor bottles. “Besides, I have a college kid who’s over 21 and who’s now back home, so I’ve got to stock up.” 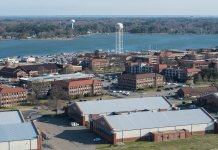