A Republican senator is accusing Democratic leaders in the House of Delegates of blocking a bi-partisan pick to fill a district court judgeship because the candidate opposed former Gov. Terry McAuliffe’s blanket restoration of felon voting rights in 2016.

LaBravia Jenkins, the commonwealth’s attorney of Fredericksburg, was one of dozens of Virginia prosecutors who signed an amicus brief filed with the Supreme Court of Virginia challenging McAuliffe’s move, which was ultimately ruled unconstitutional.

“She thought the process was flawed and she stood up for that,” said Sen. Richard Stuart, R-Stafford, who argued that Jenkins, a black woman, was exactly the kind of candidate the General Assembly should be elevating to the mostly white and male judiciary. “Now they are ripping her off, pulling her from the list and blocking her from going on the bench because of that. And I think it’s incredibly unfair.”

“I have absolutely no idea,” said Sen. John Edwards, D-Roanoke, who chairs the Senate’s Judiciary Committee.

Things weren’t much clearer in the House. Del. Joe Lindsey, D-Norfolk, who chairs the chamber’s judicial subcommittee, only acknowledged that the local delegation put a name forward, but that “there’s not support for that candidate.”

In short, it was a classic General Assembly judge fight, mired in obscure protocol, ongoing obfuscation and lingering grudges.

Virginia and South Carolina are the only two states where judges are elected by the legislators, and the process has long been fraught with political in-fighting.

Most states hold general elections to select judges. Carl Tobias, a constitutional law professor at University of Richmond who has studied Virginia’s judicial system, says he doesn’t think that’s a great system either, but says there are other options, including establishing a commission to make appointments or mirroring the federal system, in which the president makes appointments that are then vetted by the Senate.

“I think those seats are so prized and so important that sometimes the choices are made based on how they think the judges will rule,” he said. “That’s not ideal.”

The most high-profile Virginia dispute in recent memory came in 2016, when McAuliffe, a Democrat, made an interim appointment to the Supreme Court of Virginia while the legislature was out of session. The move irked Republicans who then controlled the legislature and said McAuliffe had made the appointment without consulting them.

During a prolonged and volatile back and forth after lawmakers reconvened, the GOP refused to reappoint McAuliffe’s pick, Jane Marum Roush. They briefly considered elevating Ken Cuccinelli, the state’s polarizing former attorney general, to the court before settling on then-Court of Appeals Judge Stephen McCollough.

For state-level judgeships on the Supreme Court and Court of Appeals, the majority party’s caucuses in each chamber privately select candidates from a pool of applicants that has been vetted by the Virginia Bar Association. If there is a disagreement between the House and the Senate, negotiations ensue.

“A lot of times you have to make an agreement — you get the Supreme Court and I get the Court of Appeals,” said Del. Terry Kilgore, R-Scott.

A deference to local preference

To select the local judges that oversee circuit, district and family courtrooms around the state, the majority party has typically deferred to lawmakers who represent the judicial districts in which the appointee will serve.

What that looks like varies by region. In some areas, candidates apply to the local bar association, which conducts interviews and, as in the state level selections, ranks applicants as either highly qualified, qualified or not qualified. In other areas, lawmakers handle applications and interviews themselves.

Whatever process they use to winnow the field, members from the local delegation — Republicans and Democrats — meet privately to vote on who their region’s nominees should be.

A public round of interviews before the judiciary committees of each chamber follows and, a few weeks later with no further public discussion, a resolution appears on the floor of both chambers proposing the election of unnamed persons to specific judgeships.

‘I am stunned by this’

That’s when Stuart, the senator from Stafford, noticed the resolution didn’t call for an appointment to the district court vacancy in the Fredericksburg area for which Jenkins had been selected.

“It’s not right, because our delegation agreed on her,” Stuart said. “The House leadership shouldn’t determine who’s going to be in each delegation’s selection.”

The Senate voted unanimously to add Jenkins back into the nominations, but because the House didn’t follow suit, she was not among the 24 other appointments and reappointments lawmakers made Tuesday. (A second appointment in the Roanoke area was delayed a day over disagreement among local delegates that at one point led Sen. Lionel Spruill, D-Chesapeake, to accuse a Edwards of trying to delay a vote to appoint former Del. Onzlee Ware to a circuit court seat because he “can’t stand” him.)

McAuliffe has made no secret he remains upset by the prosecutorial backlash to his restoration of rights maneuver. Last year he actively campaigned against then-Arlington Commonwealth’s Attorney Theo Stamos, who also questioned his approach. She subsequently lost her reelection bid to a primary challenge from the candidate McAuliffe endorsed.

But if Jenkins’ appointment was targeted on McAuliffe’s behalf, no one besides Stuart was willing to discuss it publicly.

Del. Jennifer Carroll Foy, D-Prince William, who is also a member of the delegation, confirmed that Jenkins was the group’s pick. And like her colleagues, she said she didn’t know why Jenkins wasn’t included in the final nomination resolution.

“I’m not quite sure,” she said. “We have not spoken on it here on the House side.”

Lindsey, the House judiciary subcommittee chair, would only say in a brief interview that it’s “not automatic that someone get nominated from a delegation and they become a person on the final resolution.”

“It was just a situation where issues were brought forth as to whether she was an appropriate candidate and it was determined that she was not,” he said.

Jenkins said in a phone interview that her decision to sign the amicus brief was the only explanation she had been given for the decision to pull her nomination.

“I am stunned by this, pulling my name out,” she said.

She said she supported McAuliffe’s intent, but objected to the legal maneuver he used to accomplish it, which she worried wouldn’t stand up to scrutiny. It didn’t, and McAuliffe ultimately opted to individually restore rights via autopen.

“Everything’s fine and he fixed the problem,” she said. But she got wind that he was offended. “I did what I thought was right at the time, and I’m sorry if Gov. McAuliffe was offended by that. I was told by one of the legislators that he took it very, very badly.” 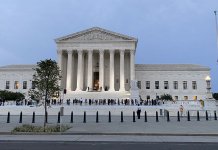 The Supreme Court could strike down Obamacare. Here’s what’s at stake.