A proposal to add a bipartisan redistricting commission to the Virginia Constitution passed its first test in the House of Delegates Monday evening, signaling a late-session breakthrough in a yearslong effort to reduce the General Assembly’s gerrymandering powers.

The House Privileges and Elections Committee voted 13-8 to advance a proposed constitutional amendment to create a 16-person commission to redraw the state’s political maps next year using new census data. Four Democrats voted with nine Republicans to report the proposal to the House floor for a final vote later this week. Seven Democrats opposed it.

The Democratic split appeared to throw the proposed constitutional amendment into jeopardy earlier in the session as House leaders declined to put their version of the amendment to a vote. But the Senate version — which passed the upper chamber 38-2 — was still alive, and Monday’s vote ensured it will move forward for consideration by the full House. If it passes, it will still have to be approved by voters in a statewide ballot referendum this fall.

Anti-gerrymandering advocates applauded after the committee vote, taking it as a positive sign that the political shift at the legislature may not doom the proposal as some feared.

“At the end of the day, stuff like this is about the health of our democracy,” said Del. Schuyler VanValkenburg, D-Henrico, who sponsored the amendment in the House. “And I think our commission, if it passes in November, puts us in a place to be a healthier democracy.”

If its approved this fall, the commission would oversee the once-a-decade redistricting process that, thus far, has been controlled by whichever party controls the legislative chambers and the governor’s mansion. If the amendment fails and no other reform measure is passed, Democrats would have full control over the 2021 redistricting, putting the party in a position to lock in its majorities for years to come.

The amendment represents a bipartisan compromise Republicans and Democrats struck in 2019, the final year the GOP had control of the legislature. The amendment was approved last year with broad bipartisan support, but some House Democrats — particularly members of the Virginia Legislative Black Caucus — warned it doesn’t do enough to fully end political gerrymandering and doesn’t include explicit constitutional protections for communities of color. In order to be in place for the 2021 redistricting process, amendment had to pass in the exact same form this year, with Democrats now controlling both chambers.

“We look forward to a full vote on the House floor so Virginia voters can make their voices heard in November,” Cannon said.

At Monday’s hearing, Democratic critics argued the legislature shouldn’t feel compelled to accept the only proposal Republicans were willing to support just before they lost power.

“I hate, that’s a strong word, I hate that the Supreme Court is the backdrop,” said Del. Joe Lindsey, D-Norfolk, the chair of the elections committee. He was referring to provision in the proposal stating that if the commission deadlocks or fails to deliver a map that can pass the General Assembly, the maps would be drawn under the supervision of the conservative-leaning Supreme Court of Virginia.

Supporters of the amendment contend they’ve largely addressed that concern by specifying that the court would have to hire two experts to conduct its map-drawing, one picked by Democrats and one picked by Republicans.

The proposed commission would consist of eight legislators — four delegates and four senators with equal party representation — and eight citizen members. Critics have said the commission structure could incentive partisan shenanigans because it allows any two members of the same party and the same chamber to have veto power over any map proposal. For example, if the two Republican delegates decided they’d get a better shake by kicking the process to the Supreme Court, the other 14 members would be powerless to stop them.

Sen. George Barker, D-Fairfax, who sponsored the amendment in the Senate, said that provision was included to prevent one chamber from overriding the other. Allowing legislative members on the committee, he said, was the only way for a commission to pass.

“In my discussions with a lot of people in the assembly, both Republicans and Democrats were much more comfortable if they were at the table to protect their interests,” Barker said.

Del. Marcia Price, D-Newport News, who had championed an alternative redistricting commission that she said addressed the constitutional amendment’s flaws, said having a select group of legislators serve on the commission would make them “semi-gods” empowered to grant map-drawing favors for their colleagues through backchannel conversations. She has also insisted that the amendment should include explicit racial protections instead of simply referencing the Voting Rights Act, which could be subject to change by future court rulings or federal action.

“Voting rights protections for my community are not some silver lining,” Price said. “They are the basis of the ability for us to be able to participate in the democratic process.”

Though the House GOP blocked redistricting reform efforts for years prior to 2019, Republicans on the committee expressed no mixed feelings about Monday’s vote.

“When it comes to bipartisan redistricting, this is the only vehicle that’s moving forward this year,” said Del. Israel O’Quinn, R-Washington. “And it won’t move again until 2030.” 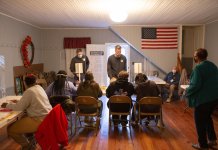