Bernie Sanders stepped onstage in Richmond last week and thousands of people who had shivered in the cold for hours responded with an ear-splitting roar for what seemed like minutes.

Overwhelmingly young and predominantly female, the racially diverse crowd was drawn there by Sanders’ populist and progressive promises (government-paid health care for all, wiping out college debt, curbing greenhouse gas emissions, taxes on the uber-rich) and by their shared loathing for President Donald Trump.

In that instant, Sanders seemed to have it all.

Message? The self-proclaimed socialist Vermont senator is clear and unwavering in proposing the most groundbreaking big-government plan since Franklin Roosevelt’s New Deal.

Money? He’s the only Democrat whose grassroots fundraising allows him to hold his against self-funded billionaire and erstwhile Republican Michael Bloomberg, a perfect foil for Sanders’ rants against privileged plutocrats.

Organization? Thursday’s rally of committed Bernie foot soldiers should be a clue.

Sanders and most of the rest of the Democratic field, including Biden, Bloomberg, former South Bend, Indiana, Mayor Pete Buttegieg and Sens. Elizabeth Warren and Amy Klobuchar appeared across Virginia in the weekend leading to the pivotal Super Tuesday primary.

Virginia figures large these days for Democrats. The commonwealth has voted Democratic in the past three presidential elections, and no Republican has won a statewide election since Bob McDonnell was elected governor in 2009. Yet this is not a state historically generous to far-left statewide candidates.

For 40 years, until 2008, Republicans had a lock on Virginia and its 13 electoral votes. Barely 20 years ago, the GOP owned every statewide elective office, both chambers of the General Assembly, both U.S. Senate seats and more than two thirds of its 11 U.S. House seats.

The Democrats’ ascendancy owes in no small part to the explosive growth of Virginia’s affluent suburbs and their college-degreed, white-collar, home-owning, two-car moderate-voting households which have swung toward the Democrats the past 15 years, particularly since Trump’s election.

How eager will that key swing vote be to support a candidate who would end employer-subsidized health insurance plans to impose a government-run one? And when Sanders speaks of higher taxes on the wealthy, might that include six-figure annual salaries many of them earn? What about the 401(k) retirement savings plans they’ve grown into several hundred thousand dollars?

“It’s clear that Virginia is not particularly Bernie-friendly. He didn’t do well here in 2016,” said Stephen Farnsworth, a University of Mary Washington political science professor and director of its Center for Leadership and Media Studies. “Virginia Democrats are not Vermont Democrats by any means.”

But times have changed since 2017. Trump was impeached, though the Senate refused to convict and remove him. During the deadly violence of a white supremacist rally in Charlottesville, he praised “very fine people, on both sides.” One Trump confidante after another has been convicted in trials related to the president’s 2016 campaign, including onetime campaign manager Paul Manafort and adviser Roger Stone. Trump’s mercurial style has created alarming turnover in cabinet-level posts. His tweets inflame international tensions and roil stock markets. A nation has grown weary.

Because of that, Farnsworth said, should Sanders be the nominee, he might be able to unify Democrats and independents in an anti-Trump coalition and keep Virginia blue.

“In a general election, when it’s Democrat vs. Republican, I think Trump is a powerful incentive to get Democrats to turn out. Voters who like Biden or Bloomberg would come together,” he said. “I do believe that Virginia is more likely to vote Democratic in November regardless of who the nominee is.”

Should Sanders lose the nomination, however, could the twenty-something throngs who screamed themselves hoarse for Sanders in Richmond Thursday back one of the establishment Democrats Sanders himself decries?

Ronald Felton, who traveled 90 miles with daughter Talaya from their Chesapeake home, had to ponder the question for a while. He had voted for Sanders in the 2016 primary, then “did the right thing” and voted for the eventual nominee, Hillary Clinton. But now?

“I think the only one I can’t see myself supporting would be Bloomberg,” he said, and then paused to further consider the alternative.

“If it’s between him and Trump, I’d probably vote for Bloomberg. I don’t think Trump has the best interests of our country at heart, I think he looks after his own interests. I also think he incites a lot of divisiveness in this country and I don’t want that for my daughter.”

Nathaniel Renouf, 44, a self-employed photographer from Stafford, carefully watched his toddler son, Sebastian, play with a blue “Bernie” placard on the arena floor as the crowd filed in. His deep investment in Sanders flows from his “Medicare for all” pledge. Lacking employer-subsidized insurance, the Renoufs buy bottom-rung coverage from the public exchange created under Obamacare and struggle constantly with premiums, copays, deductibles and potentially ruinous medical bills.

“I like some of the rest of the (Democratic) candidates, but to some extent, they all seem to follow the status quo,” he said. But could he vote for a nominee other than Sanders? “I think so. I didn’t like Hillary, but I voted for her.”

Voters under 25 drive Sanders’ passionate following, motivated – ironically – by the energy of a soon-to-be octogenarian.

“It’s his authenticity,” said John Naylor, 20, of Winchester and a senior at nearby Virginia Commonwealth University. “There’s not a specific policy reason. You just know he’s really fighting for something, not just saying it. So even if there is a policy position I don’t agree with, I support him because I know he’s real.”

He was noncommittal, however, about whether his support was transferrable to another Democrat.

Along the periphery of the crowd, Menachem Sherman, 31, of Richmond, stood quietly amid the din holding 6-year-old son, Abe, shoulder-high to give him a view of the event. A Democrat in the mold of Franklin Roosevelt and the New Deal or Lyndon Johnson and his Great Society, he says Sanders is the only candidate since then to advance that ideal.

“Even Richard Nixon was more progressive than most of today’s Democratic party,” he said.

Still, he added, he would support other Democrats in the field, “including, most hesitantly, Bloomberg because I see Trump as a bigger threat than any establishment Democrat.” 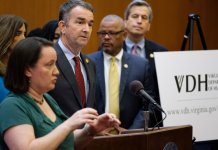 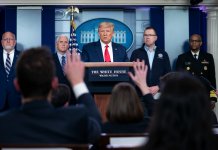 ‘A great deal of happiness’: Remember, there’s a lot more to...