Until this year, if prison inmates in Virginia needed to see a nurse or a doctor for anything other than an emergency, the state charged them a $5 copay — a modest amount in the context of ballooning health care costs nationwide but a huge sum behind bars, where most inmates are paid between 27 and 45 cents an hour for work assignments.

The Department of Corrections suspended the policy on Jan. 1 without announcement or fanfare, instituting what officials described as a pilot program to see how things go without the copay.

The General Assembly is considering legislation to make the policy permanent.

“They’re no different that the general population,” said Del. Patrick Hope, D-Arlington, who proposed the legislation. “If they can’t afford a copay they’re not going to get access to health care and health problems will get worse and worse.

“Coupled with what inmates are getting paid for the work they do – think about how much you would need to work to earn the $5 for a copay.”

The quality of health care within Virginia’s prison system has been under intense scrutiny following allegations of inadequate care and a string of deaths at Fluvanna Correctional Center for Women, which is under supervision of a federal judge.

Inmates at the facility have expressed frustration about the copay requirement and say that even when they pay it can take weeks or months to see a doctor, making people reluctant to spend the money.

“When you go to sick call, they don’t help you,” Shebri Dillon said during an interview with the Virginia Mercury in August. “They refer you to a doctor and take your vitals and make sure you’re not dead.”

She described requesting medical help and waiting two weeks to finally be seen by a doctor, who ordered an ultrasound, which took another month. A month after the ultrasound, she said she was informed they had found a mass that could be a tumor.

The Department of Corrections says they haven’t set an end date for their pilot program. “The idea was to study where it would lead us,” said Jeremiah Fitz Jr., the department’s legislative liaison.

Officials have said permanently eliminating the requirement would cost them $400,000 in uncollected inmate copays, and, depending on whether easing access to doctors leads to more visits, potentially much more. In an impact statement, the department wrote that it would cost $1.9 million “to cover personnel costs if the number of sick call requests were to double.”

Some lawmakers worried that not charging some fee for sick calls might lead inmates to abuse the program just to get out of their cells. But others said they think the concern is overblown.

Hope’s legislation passed the House of Delegates on a 68-31 and is advancing in the Senate.

“If they don’t have that money in their account, they don’t get that treatment, and I think that’s disgraceful,” said Sen. Joe Morrissey, D-Richmond.

Under the department’s suspended policy, prisoners were charged a $5 copay for each “offender-initiated request for medical and dental care,” including visits for pre-existing or recurrent conditions.

The policy stated that inmates couldn’t be denied access to health care based on their ability to pay the fee. But John Horejsi, founder and coordinator of the faith-based advocacy group Social Action Linking Together (SALT), said the department applied missed copays as debt on inmate accounts.

“They can say they don’t deny care, but everyone knows the fees go on their tab,” Horejsi said in an interview last month. “And when they leave, that’s a big debt to pay.” 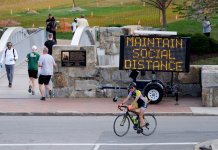