U.S. Sen. Susan Collins was absolutely right about this much: President Donald Trump has learned his lesson. And he’s learned it by heart.

Thanks to the Senate’s cowardly abdication of its responsibilities two weeks ago, the Republican president now feels absolutely emboldened to trample on what few constitutional norms remain standing in Washington D.C.

Since Collins, of Maine, and her fellow Republicans acquitted Trump on the two impeachment articles sent over from the U.S. House, the authoritarian-in-chief purged the White House of perceived critics; demanded a reduced prison sentence for a crony (with the apparent acquiescence of his own attorney general); and declared Friday that he has “a legal right” to intervene in court cases.

Writing in the Washington Post on Friday, columnist Eugene Robinson compared Trump’s Washington to the banana republics he’d covered during a four-year stint as the newspaper’s South American correspondent from 1988 to 1992.

“There has been considerable hyperventilation, some perhaps by me, about the grave harm Trump is doing to our democratic institutions,” Robinson wrote, adding that he was not hyperventilating now. “Public faith in justice is a delicate, precious thing. Once squandered, it is incredibly hard to regain.”

I’m not hyperventilating now either. There is a profound difference between the daily, schoolyard bullying that’s sadly become just a routine part of the former reality television star’s administration, and his direct, incredibly damaging and ongoing assault on the judiciary.

It’s already well-established that when Trump isn’t treating the law like his personal plaything by issuing pardons to such friends and supporters as former Maricopa County, Ariz. Sheriff Joe Arpaio, he’s insulting or undermining judges and courts he believes should bend to his will.

That includes U.S. District Judge Gonzalo Curiel, whom Trump disparagingly referred to as “Mexican” in 2018, despite the fact that Curiel was born in Indiana. Trump has also used the 9th Circuit U.S. Court of Appeals, based in San Francisco, as a personal punching bag because it’s dealt Trump a series of legal setbacks on some of his most radioactive proposals.

“I mean, it’s really sad when every single case filed against us is in the 9th Circuit,” Trump told a gathering of governors at the White House in 2018, according to CNN. “We lose, we lose, we lose and then we do fine in the Supreme Court. But what does that tell you about our court system? It’s a very, very sad thing.”

What it would tell anyone with even the most cursory knowledge of the judiciary is that the system is working. Courts follow law, and they follow precedent, not the political whims of whoever’s sitting behind the Resolute Desk, or whichever party commands a majority on Capitol Hill.

That’s why it was possible in 2008, for instance, for the late U.S. Supreme Court Justice Antonin Scalia, whom no one would mistake for a fire-breathing progressive, to simultaneously declare that, while the U.S. Constitution provided for an individual right to bear arms, the government still had a compelling and legitimate role in regulating them.

“Nothing in our opinion should be taken to cast doubt on longstanding prohibitions on the possession of firearms by felons and the mentally ill, or laws forbidding the carrying of firearms in sensitive places such as schools and government buildings, or laws imposing conditions and qualifications on the commercial sale of arms,” Scalia wrote in the landmark District of Columbia v. Heller case.

Scalia, an icon to conservatives who was appointed to the high court by President Ronald Reagan, also noted in his opinion that, “like most rights, the right secured by the Second Amendment is not unlimited … [it is] not a right to keep and carry any weapon whatsoever in any manner whatsoever and for whatever purpose.”

That’s being guided by the law. And it was a point amplified by U.S. Supreme Court Chief Justice John Roberts who, in 2018, was compelled to publicly defend the judiciary when Trump derided yet another judge as an “Obama judge.”

“We do not have Obama judges or Trump judges, Bush judges or Clinton judges,” Roberts said in a statement, the Washington Post reported at the time. “What we have is an extraordinary group of dedicated judges doing their level best to do equal right to those appearing before them.”

In that stirring defense, Roberts added “that independent judiciary is something we should all be thankful for.”

That’s the beauty and the sanctity of our system. And that’s what’s at risk when a president who already believes he’s above the law has that delusion enforced by a legislative branch that refuses to live up to its constitutional duty to serve as a check on his excesses.

That’s not hyperventilating. That’s a warning. You won’t know how much you’ll miss a fair and impartial judiciary until it’s gone. 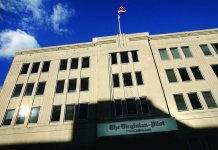 COVID-19 is the story of this century, and many newspapers may not survive to cover it

Virginia could use a lot more sunshine