WASHINGTON — The U.S. House voted on Thursday to remove one barrier to adding the Equal Rights Amendment to the U.S. Constitution, but plenty of legal and political obstacles remain.

The House voted 232-183 on Thursday — largely along partisan lines — to approve a resolution that would remove an expired congressional deadline for the ratification of a constitutional amendment to ensure equality for U.S. citizens under the law, regardless of their sex.

The Equal Rights Amendment was first introduced in Congress in 1923 and was passed overwhelmingly by the House and Senate in the 1970s. Lawmakers initially set a March 1979 ratification deadline for states, which was later extended to June 1982. But the amendment still hadn’t gotten the backing of 38 states when that deadline expired.

But this year, Virginia sparked renewed discussions about the fate of the long-stalled ERA when it became the 38th state to ratify the amendment.

In the vote Thursday to remove the deadline, Virginia’s delegation split along party lines. All seven House Democrats backed the resolution and the four House Republicans opposed it.

The effort faces political opposition in the GOP-controlled Senate and is certain to face court battles, but ERA proponents heralded Thursday’s vote as an important step toward enshrining women’s equality in the Constitution.

“I think it’s important that we go on record and say that we believe in the Equal Rights Amendment and that we believe in equality of the sexes and it should be memorialized in the United States Constitution,” said freshman Virginia Democratic Rep. Jennifer Wexton of Leesburg.

The women in Virginia’s congressional delegation have been some of Capitol Hill’s most outspoken champions of the ERA.

Wexton, who presided over part of the House floor debate on Thursday, remembers learning about the push for the ERA during her childhood in the 1970s.

“I never at that time imagined I’d be carrying the resolution in the Virginia State Senate, but I did,” she told the Mercury in an interview this week. “And it was encouraging to see some bipartisan support, but we couldn’t quite get it over the finish line then. I’m extremely happy that we finally got it through the General Assembly this year.”

Wexton’s constituents are often surprised to hear that women aren’t mentioned in the U.S. Constitution, she said.

“There is nothing having to do with equality of the sexes,” she said. “And when they hear that in fact there’s no prohibition against discrimination based on your sex, that is surprising to people. They think it should be in there.”

Rep. Abigail Spanberger, D-Henrico, another freshman, said the issue has energized her state, and was a motivating theme in the 2019 elections that flipped the General Assembly to Democratic control. Her constituents often wear ERA pins to events.

“The fact that the Constitution doesn’t explicitly demonstrate or speak to equality among genders I think is incredibly important,” Spanberger told the Mercury this week.

“This has been a living document that we have amended throughout time, as our society has changed,” she said. “So I think it’s important that women or any individual know that his or her or their rights are protected regardless of their sex.”

Wexton, Spanberger and their fellow freshman Democratic Rep. Elaine Luria, who represents Hampton Roads and the Eastern Shore, issued a statement saying Thursday’s vote was dedicated “to the Virginians who advocated in the halls of power, marched alongside their fellow organizers, educated their neighbors and inspired others to pursue the cause of equality over the last 100 years.”

The resolution to remove the deadline faces an uncertain future in the GOP-controlled Senate and in the courts.

Sen. Benjamin L. Cardin (D-Md.) has introduced a Senate version of the resolution to remove the ERA deadline. His bill has 44 co-sponsors, including two Republicans, Lisa Murkowski of Alaska and Susan Collins of Maine. Virginia Democratic Sens. Mark Warner and Tim Kaine have both signed on.

The Trump administration weighed in on the issue recently with a legal opinion that the ERA couldn’t be ratified due to the expired deadline. The opinion from the Justice Department’s Office of Legal Counsel said, “Congress may not revive a proposed amendment after the deadline has expired.”

That issue is likely to play out in the courts. Several states have filed a federal lawsuit arguing that the deadline for ratification had expired. Even if it hadn’t, they said, five states — Nebraska, Idaho, Tennessee, Kentucky, and South Dakota — have since rescinded their ratification.

Opponents of the ERA, including congressional Republicans, have pointed to recent remarks from liberal U.S. Supreme Court Justice Ruth Bader Ginsburg as evidence that ERA advocates need to start over. Ginsburg suggested recently that she believes the 1982 deadline should be considered binding. “I would like to see a new beginning” for ERA ratification, she said in an interview.

Legislation has been introduced in both the House and Senate that would effectively start the process from scratch in Congress, but that effort promises to be more politically difficult than getting the votes needed to scrap the deadline.

Virginia Republican Rep. Morgan Griffith told the Mercury earlier this week that he would oppose the House resolution to remove the deadline.

“With two deadlines that have already come and gone, I agree with Justice Ginsburg that the amendment is dead,” he said. “This resolution will not resurrect it.”

Many Republican lawmakers argued on the House floor Thursday that the Equal Rights Amendment would be used by supporters to fight abortion restrictions.

“If ratified, the ERA would be used by pro-abortion groups to undo pro-life legislation and lead to more abortions and taxpayer-funding of abortions,” said Rep. Debbie Lesko (R-Ariz.).

House Speaker Nancy Pelosi (D-Calif.) brushed off that argument on Thursday, calling it an “excuse” for those who oppose the ERA. “This has nothing to do with the abortion issue,” Pelosi said.

Spanberger also dismissed the criticisms. “I think anyone who is opposed to constitutional equality of the genders is going to find … reason to disagree and I think that’s really truly unfortunate.”

Wexton said, “it’s interesting that they’re using choice and women’s reproductive freedom as a cudgel in this instance because it just goes to show that you can’t be truly equal unless you have your own reproductive autonomy.” 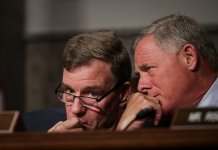