Legislation extending driver privileges and in-state tuition regardless of immigration status, pushed for years by advocates for Virginia immigrants, cleared both chambers of the General Assembly Tuesday.

“There’s a growing cognizance that these are communities who need licenses and in-state tuition,” said Monica Sarmiento, the executive director of the Virginia Coalition for Immigrant Rights. “They’re filled with talented people who already contribute to the Virginia economy and need a path forward to build their own prosperity.”

Advocates packed the Capitol for the vote on driving privileges, filling an overflow room where an interpreter translated the debate as unfolded on the floor of the Senate.

“It’s very, very important for me – this moment,” said Ingrid Vaca, who immigrated from Bolivia 20 years ago and lives in Alexandria. She teared up as she described deciding between driving without a license illegally, risking arrest and deportation, and spending two-hours traveling by public transit every morning to her job cleaning houses.

“My life was in the hands of all the people who voted today,” she said.

The Senate voted 22-18 to adopt its version of the legislation, which allows undocumented immigrants to obtain a driver privilege card.

To obtain the card, they will have to meet all the requirements necessary for obtaining a standard driver’s license, but must also have filed an income tax return. The cards would have text on the top stating that it is “not valid identification for federal, voting or public benefit purposes.”

Sen. Scott Surovell, D-Fairfax, proposed the measure. He argued many undocumented immigrants are currently driving illegally. Making sure they passed driving tests and are insured will make roads safer. He also described it as a critical quality of life issue.

“People need to be able to get to a job, take their kids to soccer, go to the doctor,” he said. “It’s an absolute necessity. This is one of the few bills we’re going to vote on this session that will change over 100,000 lives the moment it becomes law.”

The Commonwealth Institute for Fiscal Analysis, a nonprofit policy group in Richmond, estimated the new law would result in between 124,500 and 160,792 new drivers being licensed, generating a minimum of $10 million in new title fees, sales tax receipts, license plate fees and new car registrations.

The House’s version of the legislation, proposed by Del. Kathy Tran, D-Fairfax, is somewhat more permissive, granting undocumented immigrants the ability to obtain traditional driver’s licenses with no special restrictions. It passed Tuesday on a 57-42 vote.

Under both bills, the credential would not serve as a Real ID, a new standard the federal government is rolling out nationwide, which will be required to board airplanes and enter certain federal facilities.

The House and Senate will now debate the differences between the two versions of the legislation.

‘We invest millions of dollars in these kids’

Both chambers passed another bill on Tuesday that makes undocumented immigrants eligible for in-state tuition.

Del. Alfonso Lopez, D-Arlington, said he had to hide his tears when his version of the legislation passed the House 56-44 to a round of applause from advocates. (The lone Republican yes vote was Del. John Avoli, the former mayor of Staunton who immigrated to the United States from Italy at age 10.) This was the ninth consecutive year that Lopez introduced the bill and the first year it advanced out of committee onto the House floor.

The bills make all students eligible for in-state college tuition, regardless of immigration or citizenship status, as long as they’ve attended high school in Virginia for at least two years or graduated since July 1, 2008. Students would also be eligible if they’ve passed a high school equivalency exam since 2008.

Undocumented students are currently ineligible both for in-state tuition rates and federal aid programs such as student loans and work-study programs.

“In my neck of the woods, I’ve met students who should be going to MIT and Cal Tech who can’t afford Northern Virginia Community College,” Lopez said. “We invest millions of dollars in these kids and then put up a stop sign saying, ‘No, you can’t go any further.’”

A 2019 report from the nonpartisan Migration Policy Institute found that roughly 2,000 undocumented students graduate from Virginia high schools every year, according to the most recently available data from the U.S. Census Bureau.

A fiscal impact statement from the state’s Department of Planning and Budget found the bills would have an undetermined impact on revenue. It would depend on how many undocumented students transition from out-of-state to in-state tuition rates.

Neither the House nor Senate bill would apply to immigrants who temporarily move to the United States for school or temporary work. But the Senate version, which passed Tuesday on a 21-19 party line vote, also allows prospective students or their parents to use Virginia income tax returns to prove they’ve been residing in the state. Undocumented students — or their legal guardians — would be required to submit at least two years of tax returns prior to their date of college enrollment.

In both versions of the bill, students could also use proof of high school enrollment or graduation in Virginia to show they’ve been living in the state.

Under both bills, immigration and citizenship information would only be used for determining in-state tuition eligibility. Both chambers will debate the differences between the two versions of the legislation. 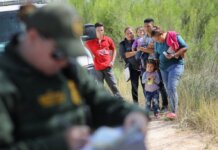 Biden immigration overhaul would reunite families split up by deportation 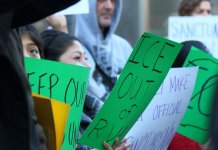 Fairfax County is first in Virginia to end voluntary cooperation with ICE: It shouldn’t be the last

Legislators must act to protect workers and families as a global...