The Virginia House of Delegates passed a bill last month (HB 440) that would mandate all freight railroads to operate with two people in the cab of a locomotive now and forever. The bill heads to the Senate after crossover Wednesday, and while legislators in the state’s upper chamber may be tempted to follow suit, railroads urge Virginia senators to think bigger than this short-sighted legislation. There is simply no safety case to justify its passage, and these matters have always been settled through collective bargaining, which is already under way.

By way of background, railroads — which are the safest they have ever been and maintain employee injury rates lower than trucking, agriculture and other related industries – currently operate with an engineer and conductor in the locomotive. At the same time, railroads continue to implement an anti-crash technology called Positive Train Control, or PTC, which provides a crucial overlay to prevent accidents caused by human error — namely head-to-head collisions and derailments caused by speeding. This backup system for engineers renders the functions of the in-cab conductor moot, which compels rail carriers such as CSX and Norfolk Southern in the commonwealth to consider strategic redeployment of these employees outside of the cab to more efficiently monitor train movements and address any unplanned events.

Just as automakers, or even truckers – which are currently testing autonomous rigs on Virginia highways alongside motorists – railroads want to use technology, including PTC, to improve safety on their fixed and private rights-of-way. The freight rail industry has a strong record for improving safety, has closely evaluated the data and has determined it can best and safely meet future demand with an engineer in the cab and on-the-ground-conductors. Legislation like HB 440, however, moves railroads in the opposite direction, undermining future safety innovation and competitiveness — a scenario that would divert freight to Virginia roads, leading to increased congestion, carbon emissions and wear-and-tear.

While two may anecdotally sound safer than one to some lawmakers, this is simply not the case. The Federal Railroad Administration — the regulator responsible for overseeing rail safety — recently ruled there is no justification for regulation mandating minimum crew sizes. In the process, it ruled that states must not impose mandates that could ultimately hinder interstate commerce.

Moreover, in the more highly-regulated European environment, most freight trains operate with one person, while in Australia there is already a long-distance freight train  running that is fully autonomous.

This is because safety goes well beyond how many people are in a cab. Railroads already deploy an all-of-the-above arsenal that provides dozens, if not hundreds, of checks on a single unit. An array of digital tools provides an additional layer of oversight as railroads deploy ground personnel throughout the network to monitor trains and communication systems remotely.

The issue need not be partisan. Elliott Long, a policy analyst at the Progressive Policy Institute, recently argued that that an inability to modernize operations would “exclude freight rail from the increased productivity of the digital age, even with the widespread anticipation of self-driving cars and semis.”

Indeed, lawmakers should remove themselves and let private industry and organized labor reach a deal in private — a process that has worked incredibly well. The fact is that railroad staffing is and has always been a matter of collective bargaining. Labor and management have bargained over the complement of a train’s crew for over 100 years. As railroads adopted technologies such as diesel-electric engines and automatic air brakes — eliminating the need for positions such as firemen and brakemen — at the time labor nevertheless claimed that any reduction in train crew staffing would pose serious safety risks. As the industry’s history demonstrates, those claims were wholly unfounded.

While automated technologies have and will continue to change the rail workforce — as they have for decades alongside safety gains — innovation in the sector and across the economy will be a net positive for the economy. Senators should oppose a crew size mandate in Virginia.

Ian Jefferies is president and CEO of the Association of American Railroads. 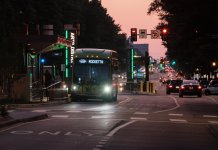 Supreme Court places ‘a heavy thumb on the scale’ for keeping...