Democrats walked off the floor of the House of Delegates Tuesday morning as the pastor invited to give the opening prayer delivered stinging remarks condemning abortion and gay marriage and said God would bring his “wrath” against those who don’t follow biblical principles.

“Is this a prayer or a sermon?,” a delegate yelled from the Democratic side of the chamber as the prayer turned increasingly political.

Speaker Eileen Filler-Corn, D-Fairfax, ultimately ended the prayer by banging her gavel and moving right into the Pledge of Allegiance.

Democrats were sharply critical of the prayer’s tone, calling it a breach of the normal protocols for guest clergy.

“It was totally disrespectful to all of us, all of us in this House,” said Del. Luke Torian, D-Prince William, who is a pastor himself.

The pastor, the Rev. Dr. Robert M. Grant Jr. of The Father’s Way Church in Warrenton, had been invited by Del. Michael Webert, R-Fauquier.

Speaking to reporters afterward, Grant stood by his remarks and called the Democratic response “unprofessional.”

As he walked off, a man accompanying Grant asked a group of reporters if they were aware that “sodomy” was once considered an offense worthy of capital punishment. He declined to give his name.

Guests delivering the opening prayers — which are usually nonpolitical and encompass a variety of religious faiths — are typically invited to send in the text of their remarks beforehand.That did not happen with Tuesday’s prayer, according to House officials.

Even some Republicans said they felt the tone was inappropriate.

“I don’t know if he was ill-instructed or didn’t realize what he was here to do,” said Del. Matt Fariss, R-Campbell. “This wasn’t the place or the time to do all of that. … This is a time we need to be working together and not being divisive.”

Under Democratic control for the first time in decades, the General Assembly is advancing legislation to roll back restrictions on abortion and strengthen laws protecting LGBTQ people from discrimination.

Other Republicans didn’t appear upset by the prayer. Socially conservative Del. Dave LaRock, R-Loudoun, posed for a photo with Grant afterward in the Capitol rotunda.

Del. Delores McQuinn, D-Richmond, a pastor, said most prayers are delivered as blessings for legislators and the work they’re undertaking.

“In many ways it felt like condemnation,” McQuinn said of Tuesday’s prayer.

“Most of the clergy that come here have been very respectful of the opportunity extended to them,” Torian said. “And every now and then you get someone that goes off the rail.” 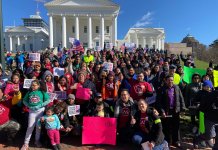