A controversial bill to ban future sales of assault weapons in Virginia and outlaw high-capacity magazines and bump stocks advanced out of a House of Delegates committee meeting Friday morning that drew an overflow crowd.

The legislation is the last big-ticket gun bill Democrats are taking up ahead of a key legislative deadline next week, but it remains to be seen whether it has enough Democratic support for final passage.

Del. Jeff Bourne, D-Richmond, invoked the mass shooting last year in Dayton, Ohio, where the attacker used a rifle equipped with a 100-round drum magazine to kill nine people and wound 17 others in 30 seconds.

“‘These guns were never, ever designed for civilian use,” Bourne said. “They are military assault rifles designed to kill as many people as possible.”

Instead of criminalizing specific types of rifles, shotguns and pistols altogether, the amended bill makes it illegal to import, purchase, sell, transfer or manufacture an assault firearm, with some exceptions for gifts, guns handed down through family estates and temporary transfers to allow weapon rentals at shooting ranges. As originally drafted, the bill would have required people who already own assault firearms to register them with the state for a $50 fee. That provision has been stricken from the bill, allowing those weapons to be lawfully kept without registration.

“No one has to give up a weapon,” Del. Mark Levine, D-Alexandria, said at the committee hearing.

The amended bill takes a stricter approach to high-capacity magazines, defined as any magazine that can hold more than 12 rounds. The bill would ban possession of high-capacity magazines and bump stocks, giving owners until Jan. 1, 2021 to destroy such equipment, remove it from the state or surrender it to law enforcement.

The bill would also create new restrictions on silencers, without banning them outright.

As he presented the new version of his bill, Levine said he had worked to find a compromise.

“We have listened to responsible gun owners across Virginia,” Levine said. “And I want to thank them for contacting me.”

To pro-gun groups, the assault weapon bill was the most controversial of the package of eight gun-control bills being pushed by Gov. Ralph Northam and the General Assembly’s new Democratic majorities. The legislation helped fuel the Second Amendment sanctuary backlash in conservative parts of the state, as numerous local governing boards passed symbolic resolutions declaring their opposition to new gun laws. That backlash also arrived in Richmond on Jan. 20, when thousands of pro-gun demonstrators, many of them heavily armed, rallied at the Capitol.

A far-reaching assault weapon ban filed by Senate Majority Leader Dick Saslaw, D-Fairfax, which would’ve banned certain firearms while giving owners no legal recourse to keep guns they already purchased, was stricken early in the session. No other version of the bill was filed in the Senate, a sign the more moderate upper chamber has little appetite for the proposal.

“Your colleagues don’t want this bill. On both sides,” D.J. Spiker, Virginia director for the National Rifle Association’s Institute for Legislative Action, told the House committee. “Nobody wants this bill.”

Republicans on the committee reiterated their view that gun-free zones are to blame for mass shootings, not particular types of guns.

“We cannot legislate morality. We cannot stop evil,” said Del. Tony Wilt, R-Rockingham. “What we’ve done with these gun-free zones is create a target area for some insane person.”

It’s not clear if the amended bill has enough Democratic support to pass the House or Senate floor, but the Northam administration is still firmly behind it.

“The court will uphold this legislation. You just need to pass it,” said Secretary of Public Safety and Homeland Security Brian Moran.

The bill could come to a vote on the House floor early next week. 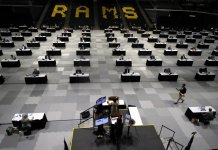 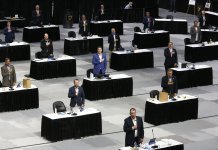 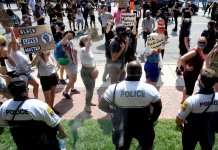 Amended assault weapon bill passes first test in Va. House, lawmaker promises ‘no one has to give up a weapon’