WASHINGTON — Even before opening arguments were made in President Donald Trump’s impeachment trial in the U.S. Senate, things got testy.

U.S. House Democrats and Trump’s lawyers sparred for hours Tuesday over the parameters for the third presidential impeachment trial in U.S. history, offering a preview of their substantive arguments and setting the tone for the fiery debate that will dominate Capitol Hill in the coming days — or perhaps weeks.

Led by Rep. Adam Schiff (D-Calif.), the chairman of the House Intelligence Committee, House Democrats reiterated their arguments assailing Trump over allegations that he improperly pressured Ukraine’s president to investigate Trump’s political rival. Democrats charge that Trump then sought to cover up his behavior and stonewall Congress by failing to provide documents and witnesses for their investigation.

House Democrats (joined by one independent) voted along party lines last month to impeach Trump for abusing his power and obstructing Congress.

“The misconduct set out in those articles is the most serious ever charged against a president,” Schiff said Tuesday on the Senate floor.

Trump’s own attorneys, meanwhile, portrayed the president as a victim of Democrats’ relentless attempts to oust him. They attacked the House impeachment process, even as they stated several inaccuracies about how those proceedings were conducted.

After several hours of heated debate in the Senate on Tuesday, while U.S. Supreme Court Chief Justice John Roberts presided, the chamber was expected to approve the trial rules set forth by Senate Majority Leader Mitch McConnell (R-Ky.) and opposed by Senate Democrats.

If you want a fair trial, you call relevant witnesses, review the evidence, and you honor our oath to do impartial justice. https://t.co/ng7Pj4BidK

McConnell’s rules initially would have required the House impeachment prosecutors and Trump’s defenders to cram their opening arguments into two days, but he relented and extended that time frame to offer each side three days after GOP senators expressed concerns, including Susan Collins of Maine and Rob Portman of Ohio, Politico reported. McConnell’s resolution also delays any possible witness testimony until after the opening statements and a round of senators’ questions.

Senators are forced to abide by a restrictive set of rules while the trial is underway. They must check their cell phones outside of the chamber, stay seated at their desks and remain silent (under penalty of “imprisonment”) as both sides deliver their arguments. An obscure Senate rule only allows lawmakers on the floor to drink water or milk in the chamber.

Schiff suggested to senators Tuesday that their votes on the parameters of the trial would be more important than their votes on whether to remove Trump from the White House.

“The most important question is the question you must answer today: Will the president and the American people get a fair trial?” he said.

‘The president has done absolutely nothing wrong’

Cipollone slammed House Democrats for their delay in sending the articles of impeachment to the Senate and he urged lawmakers to adopt McConnell’s rules designed to hasten the process.

“We believe that once you hear those initial presentations, the only conclusion will be that the president has done absolutely nothing wrong and that these articles of impeachment do not begin to approach the standard required by the Constitution,” Cipollone said. “There is absolutely no case.”

Cipollone also accused Democrats of refusing to allow House Republicans into closed-door impeachment proceedings; Republicans were, however, allowed into those witness depositions.

Schiff accused Trump’s team of attacking House Democrats to deflect debate about the trial parameters and about Trump’s behavior.

Trump’s allies didn’t want to “talk about how — pardon the expression — ass backwards it is to have a trial and then ask for witnesses,” Schiff said. “And so we’ll attack the House managers because maybe we can distract you for a moment from what’s before you. Maybe if we attack the House managers, you’ll be thinking about them instead of thinking about the guilt of the president.”

The White House on Monday announced that a slate of House Republicans were joining Trump’s impeachment defense team, although their role appears to be largely ceremonial, CNN reported.

They have been some of Trump’s most outspoken defenders on social media and cable news, and they had his back again on Tuesday as the trial got underway. 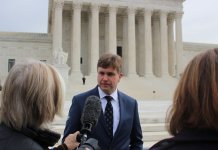 Rookie Va. lawmaker will ‘be loud’ in fight against Trump’s drilling...